Also please note the original version of the essay contained a pivotal typographical error. That has been corrected.

People are sending me Trump social media content shared by other ACDC members.

This one gets to me. Patrick Mullin holds two local positions of power and authority. He is an elected Commission in Ross Township (since 2015) and an elected member to the Allegheny County Democratic Committee (ACDC.)

In September 2018, Ross Township became the fifth Western Pennsylvania municipality to create a local non-discrimination ordinance. Pat Mullins voted for that ordinance and it carried the day, much to my personal delight. My partner and I spend a lot of time and money in Ross Township – we patronize restaurants, car washes, grocery stores, drug stores, coffee houses, and more on a weekly basis. And every single time we walk into Eat’n Park or Monte Cello’s or the mall – every single time – I silently acknowledge that this local ordinance in tandem with the Allegheny County ordinance tells us that our lesbian family is welcome and wanted in Ross Township. I don’t take that lightly, especially after spending time in portions of Pennsylvania where I have zero protection. 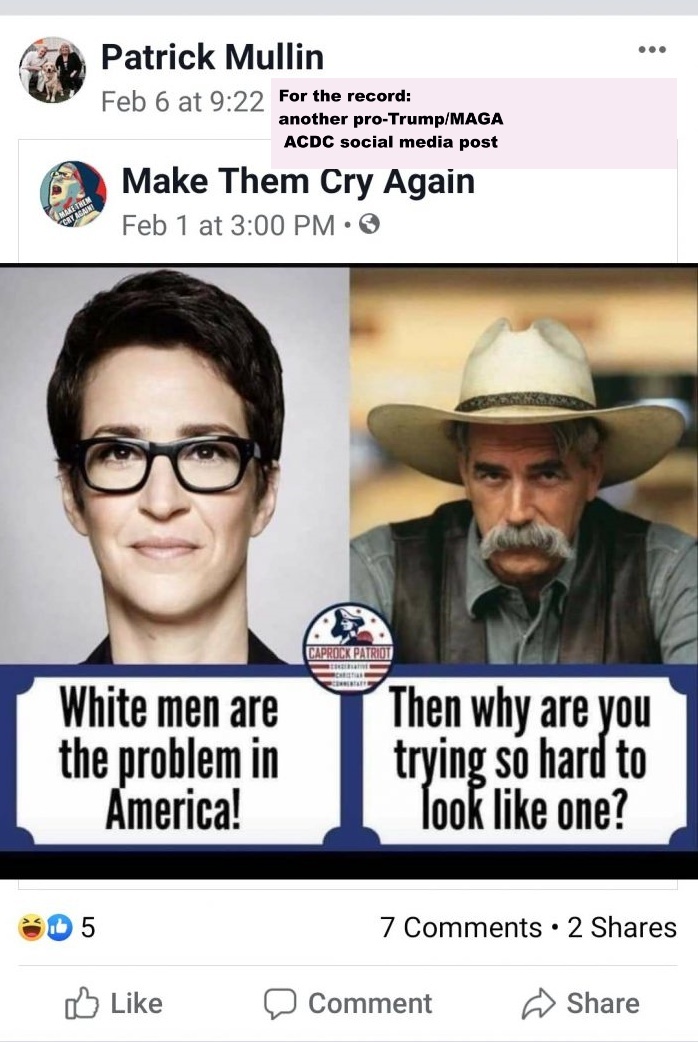 Rachel Maddow is a respected journalist with the highest ratings for her 9 PM slot on any cable network. She’s written many books, she’s a Rhodes Scholar, she has a Ph.D from Oxford, and she’s been a steady voice in political conversation. She’s an absolute fantastic hero for every young person in Ross Township, especially young women and young queer youth. Rachel is a cis gender lesbian. She is not a man. Her personal style and aesthetic might be described as masculine leaning, but that does NOT make her a man. To suggest otherwise is not just a cheap shot at an established authority figure, but a very dangerous message for young people and queer folks in Ross Township and beyond.

This sort of “woman in men’s clothing” is anti-lesbian, make no mistake. But it is also a clear dismissal of the experiences of individuals exploring their gender identity, people who probably shop in the Ross Township Target and the Ross Park Mall and other local businesses. I know a lot of trans folks who patronize the thrift stores in Ross.

Pat Mullins is bashing lesbians and trans folks as well as other non-binary individuals. Bashing all of us for a cheap laugh on Facebook.

He also dabbles in some welfare/poverty bashing in a throwback to good old fashioned Ronald Reagan demonizing tactics. 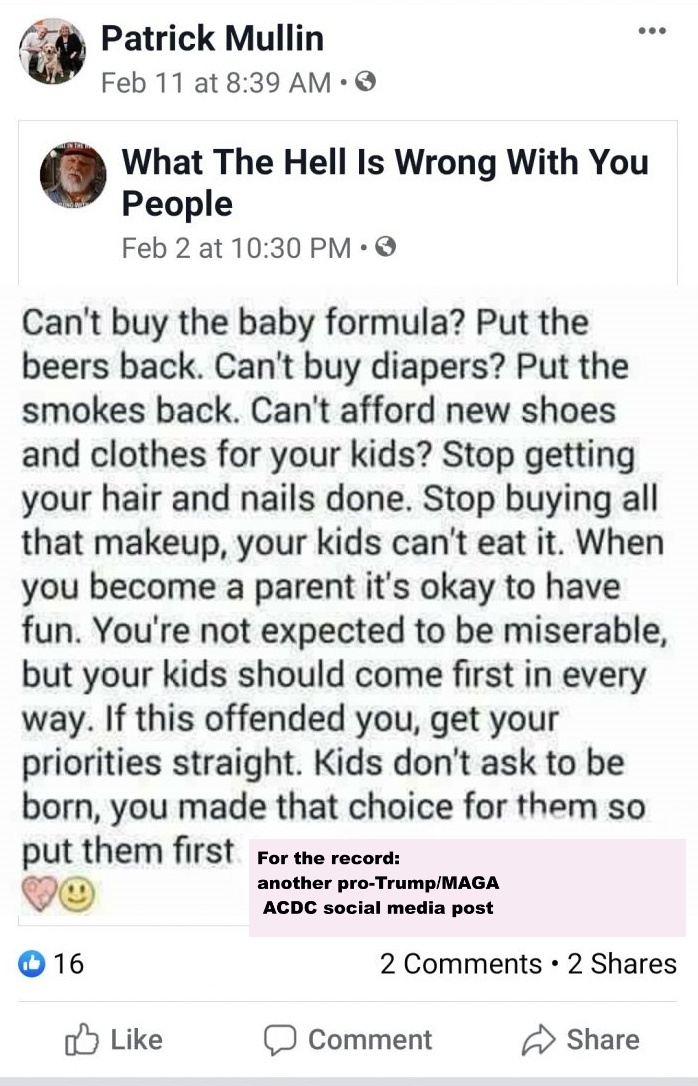 And he takes more homophobic, transphobic and ageist potshots using Greta Thunberg’s image. Rachel Maddow is a 46 year old woman. Greta was a 16 year old kid when he posted this in October 2019. 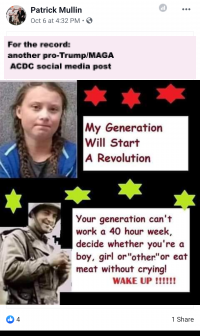 Why do these grown men think it is okay to harass school girls? Yesterday, I illustrated that Jeff ‘Bean’ Anesin posted content sexualizing 5th grade girls.

What is wrong with these men? How is this okay? How do parents of the 16 year old girls in Ross Township much less the parents of queer youth, trans youth, gender nonconforming youth, youth who are vegetarian or growing up in families where parents rely on social safety net programs – how do these parents look at this man and think “he’s a good man?”

Pat Mullin has a chance to make this right. He can certainly remove the posts and post an actual apology that shows he understands how egregious his choices are. He could step down from the ACDC and the Township Commission to pave the way for someone without this baggage.

He could even lead the charge to call the other white faux-Democratic men making these Trumpian choices to task and hold them accountable. He could attend some trainings to learn how to do better. He could go to an organization like Just Harvest and educate himself on poverty and welfare issues among other topics he clearly doesn’t grasp.

In short, he could imagine how Donald Trump would respond to my criticism and do the exact opposite. That’s not even hard to envision.

Will Patrick Mullins be the man people in Ross Township believe him to be? Or will he be another Jeff Anesin who responds to this criticism by digging in his heels and playing old school politics?

Only time and the members of the ACDC will tell … Adam Ravenstahl has some explaining to do as well as he seems to hang out with some creepy men.

What the Hell is Wrong With You People 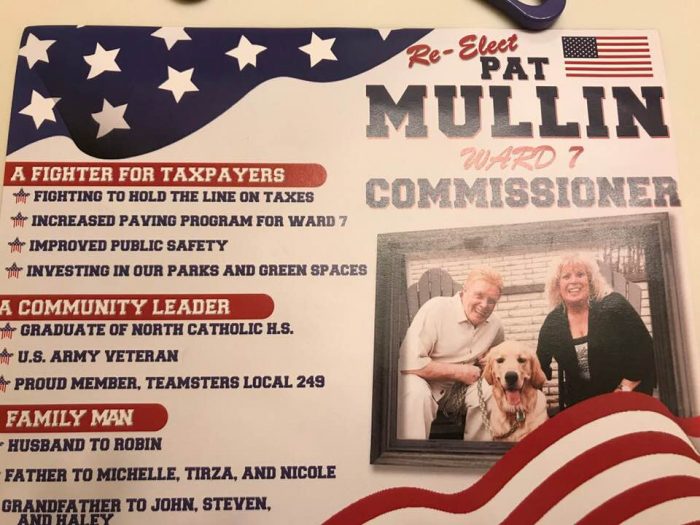