I can’t remember a world without the Pittsburgh Post-Gazette. My family subscribed religiously to the PG and the Pittsburgh Press for my entire life. I have vivid memories of pouring through each section from the funny pages to the front pages. I even read the Want Ads just because they were there and being there meant they offered me a chance to learn something new, to absorb some element of information that I might otherwise miss. I was a curious kid and newspapers helped guide my curiosity toward untold worlds that would otherwise be inaccessible to my blue collar family in West Mifflin, Pennsylvania – from world news to recipes, it was all information that I craved.

And it was a profession, a craft, that I was taught to respect and admire. My great-grandfather was a ‘newspaperman’ for 52 years, most of it with the Pittsburgh Post-Gazette. We were raised to respect the profession as well as the tradespeople who made it happen.

Through my genealogical research, I’ve uncovered many family ties to the local newspaper industry – from my 5x great-grandfather who as a gentleman farmer actively sought new subscribers in the early 1800’s to cousins and extended kin who worked the presses and drove the trucks and delivered the papers in neighborhoods throughout the region. The Post-Gazette is in my blood, my genes, my DNA.

And yet I never considered a career in journalism. That has everything to do with other things in my DNA and genes and nothing to do with the profession itself. I revered journalists and still have the very first email that Tony Norman responded to in the year 2002.

This blog is a media site, but we are not journalists. Well, Trish is a journalist, but the rest of us are writers of varying degrees of proximity to journalism. We rely on the local mainstream media to provide us with facts and information for our own writing, but we also offer them a mirror of the queer gaze should they want to be informed about how some LGBTQ people experience media. We are writers, artists, creators, analysts, critics. We are bloggers and we depend upon a robust print newspaper to lead the charge. Or provide a starting point for our content.

When the Pittsburgh Press and the Post-Gazette merged in the early 1990s, it didn’t feel ominous. After all, it was inconceivable to me that a major city like Pittsburgh could exist without a daily newspaper. The rise of the Tribune-Review reinforced that belief.

Anyway, this week the blog will join the solidarity byline strike to show our support with the Guild and all of the staff at the Post-Gazette who make it possible. Forgoing a byline isn’t quite the same thing for a blogger and did require some creative engineering on my part to fiddle with the WordPress software. Using first person probably makes it clear who wrote this. But nonetheless, we are showing up (or not) because the Pittsburgh Post-Gazette is valuable to us and we know that the value begins and ends with the staff who produce it.

I don’t agree with them on some of their choices. I don’t necessarily like all of the guild members or respect them and some of them do not like or respect bloggers. But I respect their right to earn a decent living in a work environment that supports their better impulses.  I’ve lived in a community without a newpaper or daily news source and it is a dark space. So we are offering up our bylines and bringing our awards, social media influence, archival tools, and our energy to stand in solidarity. This includes my byline with the Pittsburgh Current. I will not be publishing on sites like Medium where I cannot control the byline. It is a small financial sacrifice, but there you have it. I’m willing to make it.

Pittsburgh deserves a robust and vibrant Fourth Estate.  The role of a free press is vital now, perhaps more than ever. I’m horrified by the ignorance of some Pittsburgh people about the role of media or the concepts of a free press and the role of fairness, facts, accuracy, and public information. Activists are trying to control the media from both the left and the right. This is a terrible thing. We need more freedom, not more control of the media.

There’s a lot of terrible right now, but losing our newspaper is only going to worsen things.

If you were that kid sprawled out on the floor or couch, pouring through sections of the paper that spoke to you. If you were someone who clipped out articles that mentioned you or your family. If your cause or organization or group or business was mentioned in the Post-Gazette over the past 200+ years. If any newspaper anywhere enhanced your life.

Now is the time to take a stand with the Guild.

The Newspaper Guild of Pittsburgh is calling upon the public to email its outrage at the repulsive treatment of Pittsburgh Post-Gazette journalists — creating a hostile work environment and not providing a raise in 14 years — to those responsible for the unconscionable actions:

Share this or related content and spread the news about the strike and the larger issues of a free press and fair workplace. 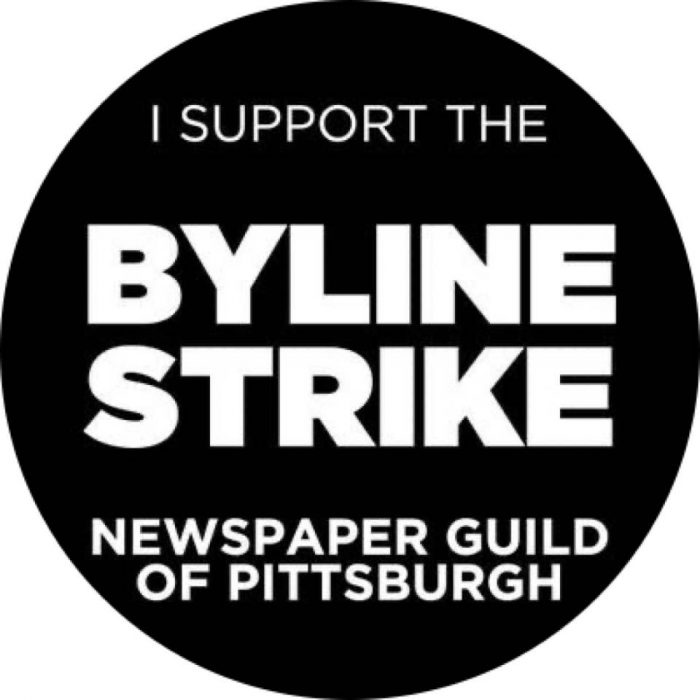