The Prompt – Were you alive during the Immaculate Reception? Do you have any memories of that moment in sports history? If no, tell us about the first time you heard of this historic event, even if that means you googling it right now.

The Immaculate Reception is one of the most famous plays in the history of American football. It occurred in the AFCdivisional playoff game of the National Football League (NFL), between the Pittsburgh Steelers and the Oakland Raiders at Three Rivers Stadium in Pittsburgh, Pennsylvania, on December 23, 1972. With the Steelers trailing in the last 30 seconds of the game, Pittsburgh quarterback Terry Bradshaw threw a pass attempt to John Fuqua. The ball either bounced off the helmet of Raiders safety Jack Tatum or off the hands of Fuqua, and, as it fell, Steelers fullback Franco Harris scooped it up and ran for a game-winning touchdown. The play has been a source of unresolved controversy and speculation ever since, as many people have contended that the ball only touched Fuqua or that it hit the ground before Harris caught it, either of which would have resulted in an incomplete pass by the rules at the time. Kevin Cook’s The Last Headbangers cites the play as the beginning of a bitter rivalry between Pittsburgh and Oakland that fueled a historically brutal Raiders team during the NFL’s most controversially physical era.[1]

Technically, I was alive – clocking in at 26 months on that fateful historic day. I don’t know where I was living, I spent parts of my early childhood with family while my mother had a multiple months-long hospitalization so I’m unsure of where exactly I ‘watched’ the game, but I am 100% positive that whomever in my family had me on that day had the television on and was intently watching the game. I’m sure that whomever in my family was working at the steel mill had the radio on and listened in to the game.

A memory I do have is learning about the ‘Immaculate Conception’ in CCD and being quite confused what Mary and Jesus had to do with football or Franco Harris. And that’s fine because 99.9% of the world get the actual big IC wrong anyway (hint – not about virgin birth.) This incident was probably circa 1978 so the actual football miracle was enshrined in Pittsburgh lore.

Growing up in the 1970’s, I was immersed in legendary reverence for Franco Harris, Mean Joe Green, Lynne Swann, L.C. Greenwood, Dwight White, Jack Ham, Jack Lambert, Mel Blount, John Stallworth, Roy Gerela, and Terry Bradshaw. Those are the names I remember, but they didn’t all play during that fateful 1972 game, just during the 70’s in general. My parents watched the game as did the entire neighborhood. I learned about football by secondary exposure – I knew enough to make sense of a game, but my curiosity always led me down dark paths that the football fans in my family found annoying.

My unending barrage of questions would eventually land me ‘with a book’ in my bedroom or “with a snack’ in the dining room. I wanted to know things – who was responsible for washing the yellow referee flags? why couldn’t a kicker and a punter be the same person? how did the coach and on-field team communicate? did football make Joe Greene mean or was he mean before he started to play? did Jack Hamm get teased because of his name?

To me the legacy of the Immaculate Reception is wrapped up in the legacy of Franco Harris the man along with the legacies of his wife, Dana, and son, Dok.. They are good people who continue to do important, strategic work for the people of Pittsburgh.

The one time I was allowed to attend a football game with my Dad (1983, December, Minnesota Vikings), I remember being incredibly cold and wondering what on earth could generate such intense devotion amongst the fans. I remember getting a cup of hot chocolate that I struggled to hold with gloves while it cooled enough to drink. I remember taking the Gateway Clipper ferry from Station Square to Three Rivers Stadium. And I remember how excited my father was to be there in person. He was surrounded by this glow, this aura, of peace and happiness and intensity that I rarely saw in him elsewhere.

My Dad grew up immersed in sports. He was raised by his grandparents and his grandfather, Gil Remley, was the Executive Sports Editor for the Pittsburgh Post-Gazette. Gil (known as ‘Da’ to all of us) grew up playing baseball in Allegheny City so he was a fast kid and well-suited to begin working as a copy boy for the Pittsburgh Sun in 1906. He worked his way into reporting, general and the crime beat, but eventually landed back in the sports department where he fused his love for all sporting activities with his craft. He didn’t attend many games because was staffing the desk to get the results into the next edition, but he followed everything and taught his grandchildren to do the same. To be honest, they probably loved baseball more and I’m sure that had to do with his early days playing youth league games in the streets of the Northside, but mostly they inherited his appreciation for a good athletic match.

Da passed in 1961, long before I was born. His legacy was sports, sports, and sports. I learned so much more about him doing genealogical research. But his life story just confirmed the absolute love for sports that filtered down into our 1970’s lives. The grandchildren who went to college and worked (hard) in well-paying jobs inherited the season tickets, the grandchildren like my Dad who didn’t have that life path opportunity ended up occasionally being invited or getting tickets through his coworkers. Whereas my father grew up attending the games, we grew up watching them on tv. 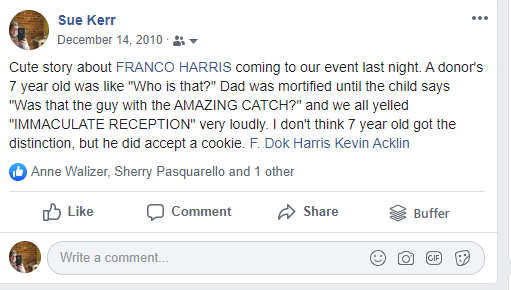 But it is important to me to note that Da wasn’t just a dusty middle-aged, mid-Century spots fan. During his younger years, I learned that he had taken on the role of business manager and, posdibly, part owner of the Homestead Grays circa 1923. The documentation is filled with racist references (not by him, but third parties) so I’m not going to link to it. There’s no explanation why he did this at age 36 when he had three kids to support and a still emerging career. And I don’t want to exaggerate his role into some sort of white saviour. My conclusion is that his participation in street youth league baseball in the early 1900s taught him lessons about fairness and talent transcending racial differences, but I don’t know. But I do wonder (questions!) how his experiences as someone whom we now might consider a white ally to Black baseball players infused his work with the sports reporting? What would he have thought of Franco Harris, the Black player with a self-dubbed Army of Italian American fans? Or would he have just focused on the controversy around the play?

As for the game I attended, I don’t remember anything about the game except losing. And I was pretty sure that my questions phase meant the coveted occasional extra ticket would be going to my brother from that point forward. But I had that experience. And it was important.

The Immaculate Reception was a moment enshrined in time and Pittsburgh lore. We heard about all of the time. It was always exciting to think about the athleticism, analytical ability, the willingness to TRY, and the legacy of Franco Harris as a good guy. That was deeply embedded in me by both of my football loving parents – Franco is an exceptionally good guy. Was he good because he participated in that sacred moment or was he good beforehand? Oh, with the questions.

Fast forward to 2019. I don’t watch much football for lots of reasons, mostly political. I’ve only been to one other game circa 1991. I’m pretty sure I won’t go again because being in the very high altitudey stands with drunken fans who probably also don’t like sidebar questions is an anxious girl’s nightmare. I’d love to watch a game from a box, the inside kind with the coffee and bathroom and comfortable seats. But I’d be tempted to kneel during the National Anthem so most people who know me well enough to invite me probably wouldn’t do so because of that possibility.

I also happen to live about a mile away from Franco Harris and his family’s Northside home. I’ve had the chance to get to know his son Dok in his own realm as a businessman and political candidate. Dok is also a really good guy, a philanthropist and a man willing to continue learning about his neighbors, including LGBTQ neighbors.

To me the legacy of the Immaculate Reception is wrapped up in the legacy of Franco Harris the man along with the legacies of his wife, Dana, and son, Dok.. They are good people who continue to do important, strategic work for the people of Pittsburgh. Like that fateful play, Franco’s ‘luck’ to be at the right place at the right time is often mistaken as what he really brought to that moment rather than his accumulated knowledge of football, his instincts, his raw talent, and his raw intellect and his years of training. He knew what to do in that moment because he was prepared and professional, not just a fortunate son.

I’m grateful to have that legacy as part of my life story and I hope very much that I can live up to it myself.