While I am not deep into fandom, stanning, or cons of any sort, I do enjoy a lifelong relationship with soap operas, particularly General Hospital.

I’ve occasionally shared my perspective on the impact of soap opera storylines, casting, and so forth. Just last month, I wrote about the potential to cast Michael Park as a love interest for the character of Ava Jerome played by Maura West.

I enjoy occasionally reading FanFiction as well as the assorted message boards devoted to soaps – it is fun to immerse myself with other fans and engage their creative suggestions, feedback, and analysis. Sometimes I’ve posted myself, but I’m often contemplating what I perceive as plotholes or tangents over the actual story.

Case in point is the relationship between General Hospital’s Laura Webber Spencer Collins (of Luke and Laura fame) with her extended children and grandchildren. Laura has three children, Nikolas, Lucky, and Lulu. Nikolas is recently back from the dead, but hasn’t revealed himself to his mother yet. Lucky is an absentee father and has been off-screen for years. Lulu has two children, both with doozies of backstory.

Laura is no longer married to Luke Spencer, but she’s tight with the other Spencer family members so she has an assortment of nieces and nephews in law as well as their children.

The Grandma Laura scenes are not exactly front and center, but have been playing out around other frontburner storylines and that got me thinking … so I wrote my very first FanFiction story and published it yesterday.

The story is titled The Grandchildren of Laura Spencer and is a simple conversation between Laura, her husband Kevin, and eldest grandchild Cameron Webber about her relationship with his siblings and cousins.

It is strangely cathartic to be able to say “here’s what I would have written” in a storyline that reaches back to my childhood.

Let me know what you think. 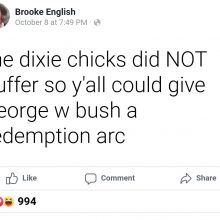