It was a blustery, dark night in December 2002 when I left the domestic violence agency where I was a volunteer. I fumbled for my keys and almost ignored the plaintive sound. A few minutes later, the plaintive soundee was wrapped around my ankles, meowing loudly, and demanding my immediate attention.

He was a scrawny male cat with a gorgeous mane of long black fur and a sweet temperament. I had some chicken in my car, leftover from a drive-thru meal that I had gobbled quickly before my volunteer shift. I put some of the chicken on the ground on a napkin. He sniffed it and stared at me. I pulled the chicken off the bones into small bites and he daintily ate the whole thing. Then when I turned to get more, he jumped into my minivan and settled on the passenger seat with an expectant look on his face.

So I took him home, convinced by his chicken daintiness that he was someone’s cat and missing. I put him in my downstairs bathroom with food, water, and litter for the night. The next few days, I tried to find his owner – flyers, called shelters, had him scanned at the vet for a chip (nope), and even a newspaper ad. I dubbed him ‘Simon LeBon’ because of all of his crooning. No leads at all. This McKeesport cat that seemed to have a home apparently did not.

The vet guesstimated his age to be about two years or so, meaning he was likely born around December 2000. I had him tested, vaccinated, and so forth. He was in the bathroom most of the time when I wasn’t home to avoid any unsupervised connections with my dogs, but had some one on one time as well.

One night, the dogs and I were in the basement hanging out – I was surfing the net and they were watching me when I heard a scrambling sound followed by a pop, a burst of styrofoam dust, and realized Simon has crawled into the ceiling tiles of the basement and deposited himself into the midst of our group. The dogs were a bit startled and hurried over to sniff him, but he was unphased. He didn’t hiss, just did some sniffing of his own and then jumped up on a nearby counter to curl up for a nap.

And that’s how Simon joined our family 17 years ago.

He was a bit of an oddball cat, super friendly and loving but not clingy. I knew something had changed this past year when he began to crawl onto my lap or cry to sleep next to me in bed or just clung to me like he was desperate. He slept on my head, he curled up on my shoulders, he was a heat seeking missile all of the time.

In 2005, Simon escaped through a door I had left ajar. He was gone for two days when my neighbors discovered him hiding a few doors down under a backyard deck. He scratched the hell out of me when I tried to cajole him into coming out, leaving me sobbing in my kitchen as my neighbor bandaged me up while Simon nonchalantly made his way back into the house and walked up to me looking for food. He never tried to escape again.

When we moved into Laura’s house, I was able to do some introductions between my dogs and her cats prior to the big day. Simon, however, was a different matter. After the boxes were unloaded, I brought his carrier into the bathroom and he began inspecting his new digs. We had planned to follow proper kitty integration steps, but Simon decided to climb through the transom and plop himself down onto the floor, introducing himself to the ranking housecat, Ming. They were thick as thieves from that point.

Simon turned into a sweet cuddle buddy for the other cats. I suspected they enjoyed the warmth of his thick body and even thicker coat of fur. He thrived here with his dog and cat crew. His greatest flaw was his propensity to hump anything in site even years after being neutered.

One time, Laura was escorting an inspector around who was assessing the house value for a URA project to do some renovations. The gentleman walked into our bedroom where Simon was going to town with our comforter. He commented “Oh look at the kitty wrestling with the blanket” and kept going. Laura was not thrilled.

In his dotage, Simon became more mellow. He was our ambassador cat for the foster kittens, all of whom adored him even as he staggered around their room simply trying to find their stash of kitten chow. His ongoing forays into our attic left him permanently covered in cobwebs. The groomer, Jen, did her best to clean up his matted fur but the end result was sort of a cat role-playing Keith Richards. I can see Keith Richards being nice to the kittens to get to their good stuff.

Simon began to fall here and there so we started putting him into the kitten playplen (the rumpus room) at night fo rhis own safety because he would not stop trying to use the steps. All of our other pets reached a point where they didn’t climb steps, but not Simon – two weeks before his death, he went into the attic and down into the basement. When little Kinzua the kitten came to stay with us as a foster, we put him in the kitten pen with Simon and then decided they could both spend their nights in the bathroom.

Kinzua adored Simon, constantly seeking him our for affection and attention and grooming. Who knows what wisdom Simon impacted during those many long nights in the bathroom, just the two of them?

In mid-October, a respiratory virus hit the entire cat family. All but two of our adult cats were sick and all four kittens as well. Everyone, including Simon, had recently been to the vet and their general good health would see them through the virus. Except Simon, who we took directly to the vet several times. It was a final battle he couldn’t win because he was too old. Just a month prior, our vet had praised him for gaining weight at age 19 and his overall health condition. But the virus knocked him down. So we decided to say good-bye.

I cried the entire night before his death. Losing a companion of 17 years was much harder than I imagine. I had never had any companion for 17 years before Simon. I was 100% sure it was the right decision, but it broke my heart.

However, the very moment his drew his last breath and the vet confirmed he had passed, I felt an enormous sense of peace, as if a big load was removed from my shoulders. I still cried, but I didn’t have any regrets.

Well, I have one regret – I wish I had gone to KFC during his final days and bought a little meal to share with him. We had used KFC earlier in the summer to trap feral cats and he was absolutely bonkers with joy to eat some himself. But he realistically wasn’t eating much anyway.

I miss my sweet boy, but I know he’s used to making himself at home wherever he hands. And paying it forward to the next cat that needs a warm meal, a ride, and a new home is just how we honor all that he gave to us.

Right now, I am raising funds to support the cat ladies and friends on Pittsburgh’s Northside who need a drop-trap, nets, gloves, and cat food stuff to help catch other homeless cats who don’t jump into cars of their own free will. You can donate and have your donation matched 100% by the Buhl Foundation. So if you toss in $5, we’ll get $10 … thanks for consider it.  Simon would approve helping other kitties, especially if it means more kitten chow for him …. 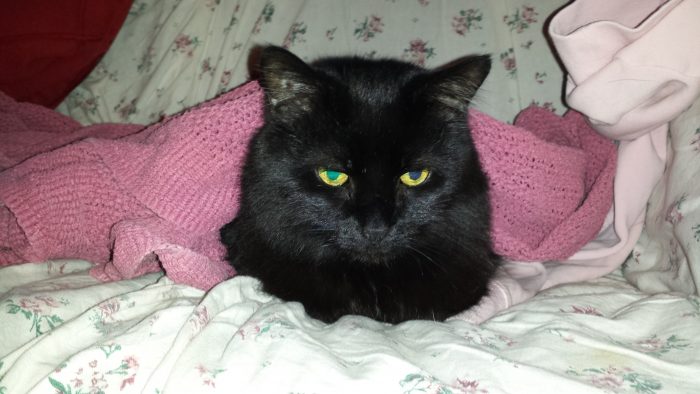 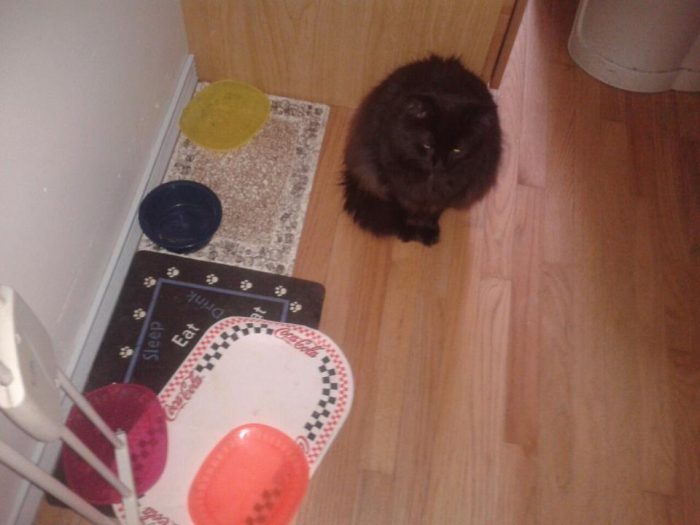 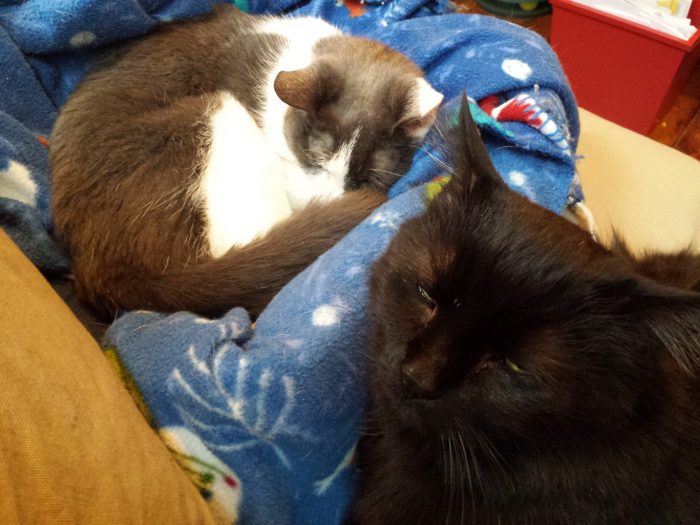 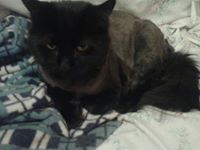 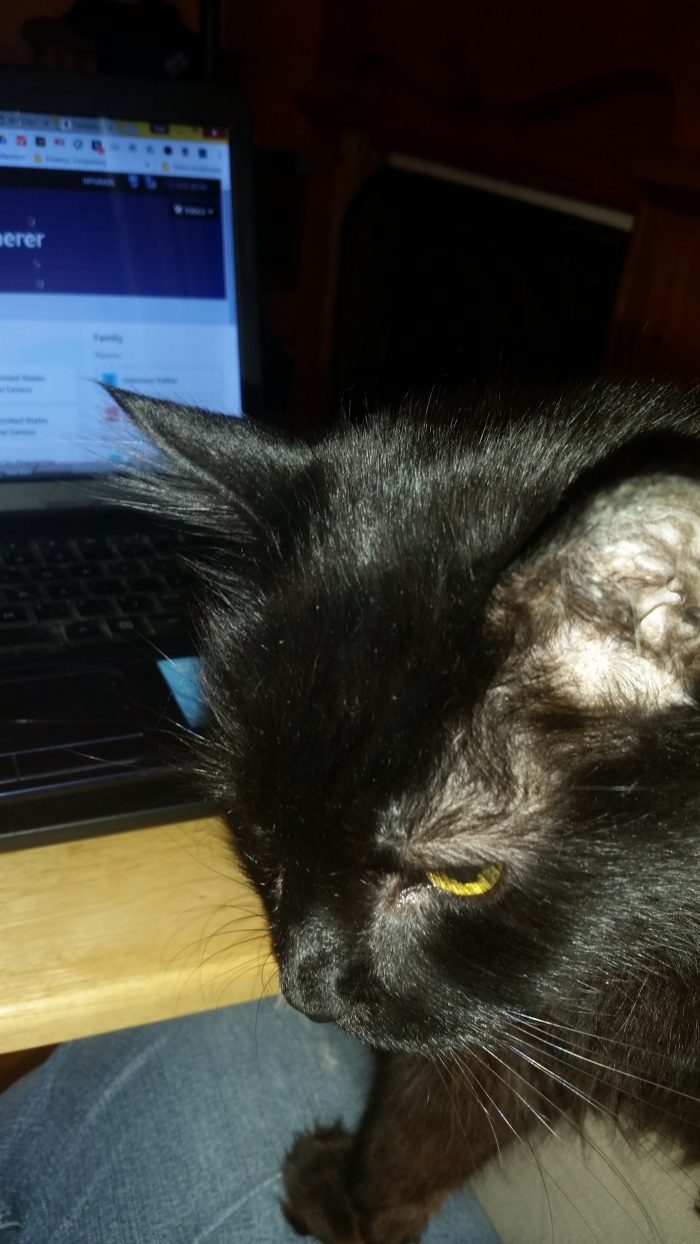 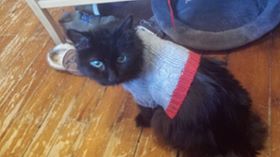 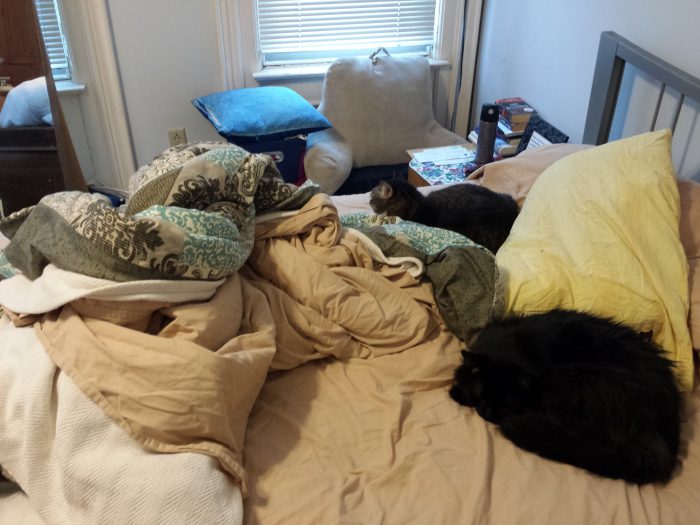 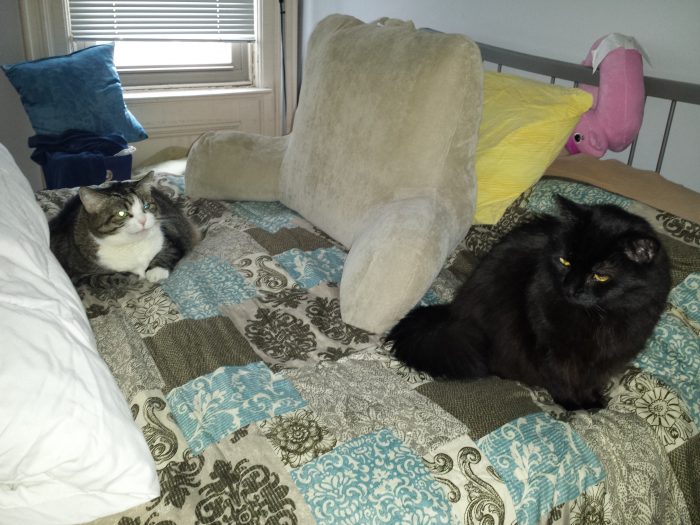