This post contains affiliate links. I’m still trying to figure out how they work. If you end up buying the stuff at the link, we may get some coins.

We don’t know for sure when the five kittens we refer to collectively as the Kitten Caboodle were born. We’ve narrowed it down based on sightings of their pregnant mother and the earliest photos of them appearing on our deck to the first week of April. So it is very reasonable to say that today, they are 12 weeks old or three months old.

Overall, they seem to be doing great. They’ve endured two rounds of illness (probably a parasitic infection) and three collective trips to the clinic. They are all gaining weight, but seem to have sensitive stomachs so their diet is solely a dry sensitive prescription food. No canned, no treats, etc. They are on track for weight; the littles are just under 3 lbs and the hefty ones are a solid 3 pounds many ounces. Their vaccine regimen is a little delayed because of the illness, but we anticipate scheduling spays and neuters in early August and finishing up their complete round of vaccines. Everyone has clear eyes, no fleas, and no noticeable health issues.

They play hard. The room is filled with soft toys, a cat tree with scratching posts, two circle toys with balls on tracks to chase, assorted boxes and the number favorite toy, the shower curtain. It is actually our clear plastic shower liner; we took down the curtain itself and put it away after we found Sun Volt swinging on it in early days. The liner is filled with little claw holes and covered in paw prints. There’s plenty of room for them to gallop and there’s a nice loop from the door to the window, into the tub for a few rotations, then out of the tub and back to the door.

They are outgrowing their tree so we are debating upgrading to a slimmer bigger model. This one caught my eye. It is very cute and narrow enough to fit into the bathroom nook where the smaller tree is now.  We think they need more opportunities to “go vertical” and also stretch out a bit when they sleep. That’s a difference we’ve noted. They are not piling into the top tier of the tree as much and doing more sprawling out on the floor. We have beds, bedding, boxes, and more. When they don’t feel well, they still ‘caboodle’ in a pile, but it is a bigger pile.  I’m going to ponder the tree for a few more days.

Artemis is our largest kitten – she was 3 lbs 10 ounces at last weigh-in. She was the last one that we caught and was very standoffish at first. Then she was taken ill by a virus and had to be sequestered in our bedroom for several days. We both spent one-on-one time with her stretched out on our bed to give her some time out of the crate. She recovered in several days and has been affectionate ever since. She’s a ‘tortie’ aka tortoiseshell cat which is a genetically unique coat.  She enjoys cuddling with her siblings and is often found snoozing alongside any one of them.

These two are both solid black with short smooth coats. Furiosa is the female and at least half a pound lighter. Galileo has a tuft of white fur on his chest. He’s a bit lankier and weighs more. He’s also more outgoing and seeks attention from us, while Furiosa still darts away. She will purr if you stroke her while she’s seated in the cat tree or the cat bed, but she’s only purred once in my arms.

Originally named Ariel, we had to change to Muriel because of the foster cat rules (no repeating cat names in a year) and it sort of suits her, the image of a 1950’s young woman who used to be called Midge and is now even more dainty using her full name. She’s miss bashful and quite wee, not yet 3 lbs. She flees from us, but with less determination each time. She loves to pounce on things with an abandon that belies her small size. Muriel is a ‘torbie’ – a combination of tortoiseshell and tabby. You can see the orange stripes in her tail and on her forehead.

Our first little man, the one whom I plucked off the back deck on May 8 when he was a little too slow to run away. Within hours, he was cuddling and purring and snuggling with us as well as eating canned food with gusto. He’s inquisitive, affectionate, playful, and independent. He helps us with every single task we tackle. He was the first to get himself stuck somewhere in the bathroom. He thinks the shower curtain is a mortal enemy that must be constantly battered. His flaw is being terrible at taking medication. He fights and argues and spits.

If you are still reading, please consider donating to our #CatFoodDrivePgh project – we are working with the Homeless Cat Management Team to get cat food for the caretakers of feral cat colonies. Most caretakers spend lots of their own money to feed and care for their feral friends. While medical and vet assistance is often covered, including spay and neuter procedures, food is not. And you can’t exactly turn someone away. You can donate through our Amazon wishlist, at our drop-off spot on the Northside, or with a financial contribution. Thank you!

Here are some of what I call the caboodle shots – photos of the five of them piled up together. They used to fit into the top of the cat tree, but they’ve grown so now the power group naps take place on a large cat bed. 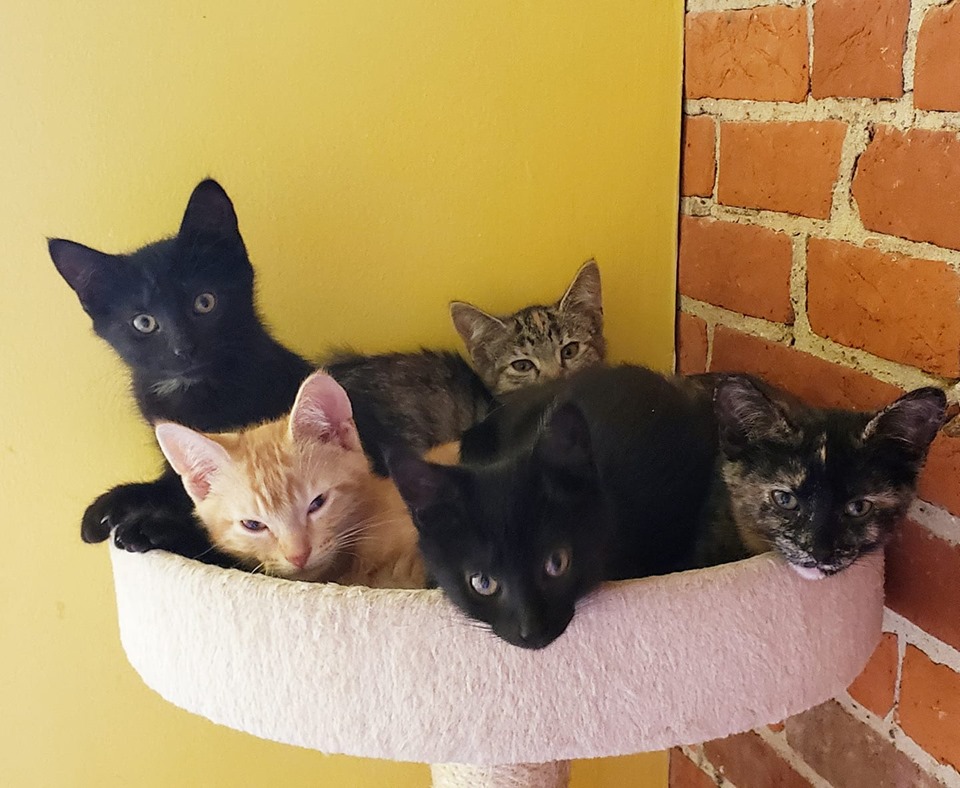 And here are some early days shots …