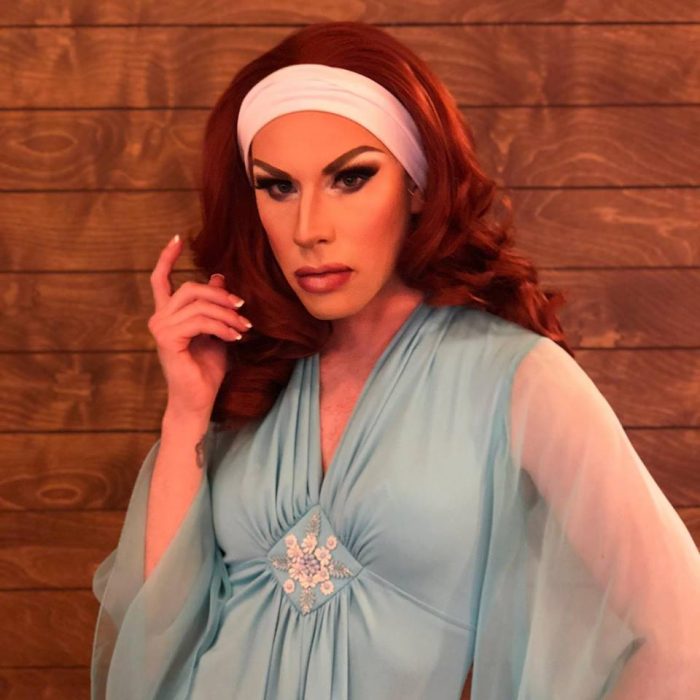 At the end of June, several local Drag Queen Story Hour events were scheduled to celebrate the 50th Anniversary of Stonewall. Two events were cancelled by the Carnegie Library of Pittsburgh and the Children’s Museum in response to non-specific online threats. Four events continued as planned – readings at the White Whale and Classic Lines bookstores, an event at The Andy Warhol Museum, and a reading in Shadyside to celebrate Stonewall.

Drag artist and non-conforming queer Ona Louise came in from NYC to read at these events, including those that were cancelled. I reached out to ask Ona to discuss her history with the DQSH events and her experiences in Pittsburgh.

My drag persona, Ona Louise embodies all the little things I absorbed as a kid as my queer roots. Old Hollywood movies, classic musicals, Endora from Bewitched, ruthless Disney Villains.

How do you describe your identity? I would say a non-conforming queer.

Please tell us about your very first impression of Pittsburgh: I love Pittsburgh! Big city with a small town appeal. The queer scene was a lot of fun and very mixed groups of people together.

What Pittsburgh creators – writers, musicians, poets, etc – have influenced your work? Is there anyone with whom you’d like to collaborate? Going to the Andy Warhol Museum for the first time was a lot of fun. Having the museum not cancel their scheduled Drag Queen Story Hour was super inspiring! Can’t wait to collaborate with them in the future with regards to the Pittsburgh Story Hour Chapter

Please tell us about the first LGBTQ person that you knew and what impact they had on your life. Growing up in the deep south, I think I knew a lot of queer people as a kid without knowing it (and maybe they didn’t even know themselves). My great aunt was definitely gay and loved me so much. I knew she was different than other aunts, but she was so cool and fun. She didn’t have to answer to anyone, but herself.

In other interviews, you talk about being from the Bible Belt. Please tell us a little more about where you are from and how the Bible Belt mythos shaped your childhood. I grew up in a southern baptist household in Georgia. My queerness grew from necessity. I moved to New York City when I was 21 years old and started to do drag at 25. My drag persona, Ona Louise embodies all the little things I absorbed as a kid as my queer roots. Old Hollywood movies, classic musicals, Endora from Bewitched, ruthless Disney Villains.

You are known for Drag Queen Story Hour. Am I correct that it began in San Francisco as part of a re- 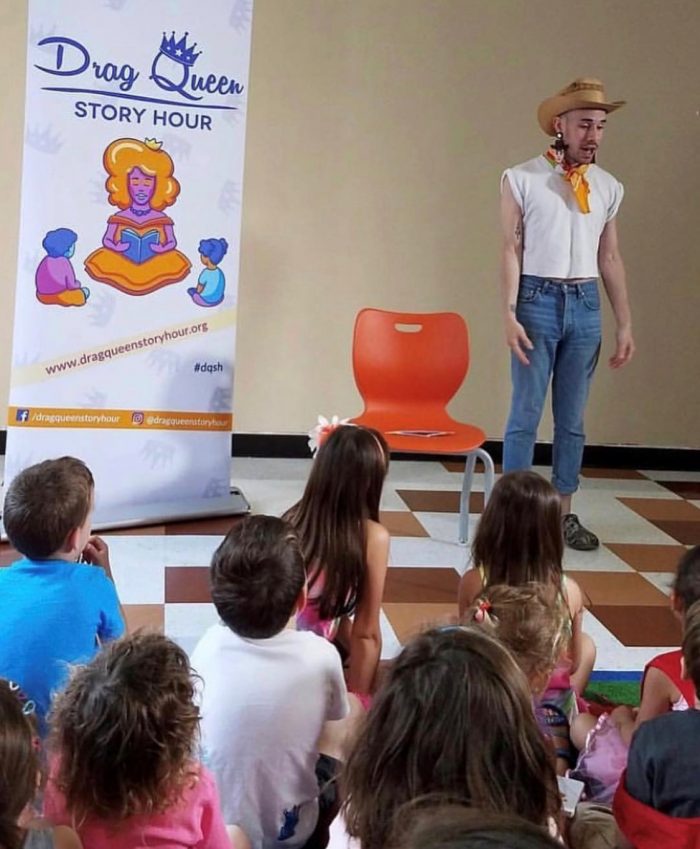 queering of the neighborhoods and then spread to New York City where it gained a solid foundation, including a formal national 501c3 status? Drag Queen Story Hour (DQSH) is just what it sounds like—drag queens reading stories to children in libraries, schools, and bookstores. DQSH captures the imagination and play of the gender fluidity of childhood and gives kids glamorous, positive, and unabashedly queer role models. In spaces like this, kids are able to see people who defy rigid gender restrictions and imagine a world where people can present as they wish, where dress up is real.

Drag Queen Story Hour (DQSH) was created by Michelle Tea and RADAR Productions in San Francisco. It started out as drag queens reading stories to children in libraries and grew into a global phenomenon! DQSH now offers literary and creative programming for kids and teens of all ages led by drag queens, kings, and creatures all over the world. Our organization’s headquarters are in New York City where we create programming curriculum, produce over a hundred events a year, and provide resources, training, and support to build our growing network of DQSH chapters all over the world.

How did you personally get involved with DQSH? What role do you play now both in your local library and in the national movement? I am the deputy director of Drag Queen Story Hour in New York City and was the first Drag Queen to read in NYC. I help establish and onboard all the new chapters nationally and internationally.

I’ve read several articles where the writers compare children to adult drag audiences as in “uninhibited people who ask a lot of questions” What about the inverse –  what childlike and childhood qualities do drag audiences bring to the adult show? Is it reasonable to say that beyond adult entertainment, some of us might be looking for the nurturing or encouragement from our drag artists that we never had in our childhoods? I think drag in itself points out the silliness, the thrill, and the powerful feelings of questioning societal expectations. Drag questions the authority of gender norms, which can be very empowering for kids and adults alike, especially for those who don’t necessarily fit into rigid or prescribed gender roles where they may frequently find themselves.

In childhood, you don’t think about gender in the same way adults do. Its all fantasy, make-believe, and fun. Drag performance takes you away to a different world where its celebrated and fun to be you no matter what that looks like.

You were recently in Pittsburgh for several Drag Queer Story Hour events, including one of the White Whale Bookstore, the Children’s Museum of Pittsburgh, and The Warhol Museum’s Stonewall Family Friendly celebration. How did you get tied into Pittsburgh’s story hours and what did you think? I was presenting at the American Bookseller’s Association Children Institute on “The Art of Storytelling”. I suggested adding DQSH to their bookstore tour and hosted at White Whale and Classic Lines. I also reached out to the Children’s Museum as well as the Library to read. Unfortunately, the library and museum both cancelled my readings, but the drag Queen Akasha L. Van-Cartier who was reading at the Andy Warhal museum asked me to perform at the Stonewall 50 Celebration in Shadyside.

How often do you travel for DQSH? Is there someplace you’d love to be invited? I have traveled to a few places in the US for DQSH. Mostly for speaking engagements. I would love to go to Sweden and meet our Swedish Chapter!

You also continue to provide other services as a drag artist, including hosting events and fundraisers. What are your adult performances like? Has DQSH had an impact on your adult shows? Performing for drunk adults at 11PM is a lot different than 5 year olds at 11AM. Ona lets her hair down in the evening and caters to a much older crowd.

How did you choose the name ‘Ona Louise’? Ona Louise is my mother’s name. So I stuck with what I know!

What events are coming up next for you? A big event will be Drag Con 2019 in NYC coming in September!

Where can readers find you on social media? @ona.louise and @dragqueenstoryhour on instagram

This past week, you were scheduled to read at several local events including an appearance at the White Whale Bookstore, the Carnegie Library of Pittsburgh, and the Children’s Museum. The Library and the Children’s Museum cancelled their events because of their safety concerns around online threats targeting DQSH. Did they consult with you before cancelling? What are your thoughts about these decisions? Safety is priority #1 when it comes to children. The Carnegie system decided to play it safe by cancelling the library and museum reading due to threatening online language. In light of Pittsburgh recent tragedy, I understand why these events were cancelled. With that said, the opposition got what they wanted, cancelled DQSHs. Its a thin line and tough decision that had to be made. I was notified a day before the readings.

The White Whale event went ahead as scheduled. How was that experience for you? White Whale and Classic lines was part of the Bookstore Tour with the Children’s Institute. The events were amazing and well attended! The kids and caregivers/parents a like loved having this program in Pittsburgh!

You also read at The Warhol Museum family event celebrating Stonewall. Was that a planned appearance or were you invited after the other events were cancelled? I was invited along to support Akasha L. Van-Cartier who was booked as the queen for that reading. So happy to have her be the face of the Pittsburgh Chapter!

How are DQSH organizers around the country responding to the general threats and the occasional high profile stories documenting bigotry about the story hours? Unfortunately, some DQSH events have attracted opposition in the form of petitions, protests, and even lawsuits. In every case, the love and support for DQSH events has greatly overpowered the haters, but it’s good to be prepared. If you’re concerned about potential backlash, we recommend working with the venue and local allies to ensure a safe and fun event.

People fear that the decision to cancel was made without the input of the LGBTQ community and may set a dangerous precedent both for future library programming and for the anti-LGBTQ bigots who feel this was a victory. What are your thoughts? After the events were cancelled I did get a call from local Drag Queen Akasha L. Van-Cartier and Richard Parsakian of Eons to perform for their Stonewall 50 Celebration in Shadyside. They were both super lovely and welcomed me with open arms. Also the owners of White Whale and Dan Iddings from Classic Lines were SUPER helpful and nice to me as well. I have nothing for love for the LGBTQ+ community in Pittsburgh and I looked forward to the day when our program will stand strong across all institutions regardless of threats.