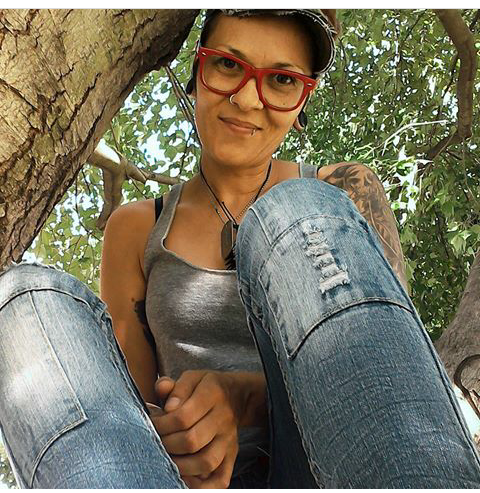 I feel cultivating a no apology energy field has gotten me far, never being hesitant to educate by example and with a fist full of words. It’s survival out here and being a soldier is a power.

How do you describe your identity? Autistic, queer, apache mexican,artist

Please describe your coming out experience. Where did you find support? What challenges did you face? I met a girl at a cinco de mayo celebration, we were inseparable, I brought her to my aunt lupe’s house and introduced her as my girlfriend, everyone smiled and said hi and offered her some food…later I heard all about people being horribly disowned so I asked my aunt Mary ” what was your thoughts when I said I’m gay, did it weird you out? she said ” no why would it your my niece, I love you” my mother wrote me a letter telling me she did t not approve of ” my life style” and attempted to use the bible as her justification, but she’s been removed from my life for years so her opinion is less then a whisper. I’ve been blessed to have a family who embraces me.

How would you describe yourself NOW in terms of “being out”? I’m extremely ok with it…there have been moments where living some place less progressive has caused ugly stares of ugly comments, and my mother using the bible as her amo of conviction, so that stain was present and I would alter my words or actions..(no hand holding, ect.) But I worked through that and decided visibility and authenticity rules over ignorance and hate. I’m very unapologetically out!

Tell me about the first LGBTQ person whom you met. What impact did they have on your life? 3rd grade, my favorite teachers ms. Roush, she loved garfield, dressed like a pe. Teacher, loved garfield and loved us! One days she announced she was quitting teaching, she was crying and her decision seemed forced and her announcement reluctant, I was very confused and sad, I went home and told my mom and she said the school found out ms. Roush was a lesbian so they fired her. This has haunted me for years, it felt so wrong, and goin through my own ups and downs with my sexuality, confirmed this more.. her story stuck to my psyche, a have deep respect and empathy for her and I hope to one day tell her I love her!

Past or present, favorite LGBTQ character or creator in television, film or literature? Please tell us why. Chavela varges! She was a man’s man, she lived proud and out spoken and received death threats for being queer, she was very successful in what was considered a man’s world singing Mexican ranchero songs about loving women. She smoked cigars and was a ladies man never once apologizing.

How do you stay informed about LGBTQ issues? Social media, Friends, news, articles

Describe your geographical community. My home town is very small and not progressive at all, Midwest small towns and smaller perspectives. I’ve lived in more progressive and less so towns my entire life..currently I live in the city of Pittsburgh and I find it to be more progressive with a hint of the lesser here and there. The majority rule though and I’m quite happy with the minds i encounter

Describe your local or regional LGBTQ community. My neighbors are gay, my friends are queer, gay, lesbian, and allies, i live within a wonderful blend of sexualities and identities and refuse anything less

Have you ever experienced discrimination based on your identity? Specifically, in a job setting, when applying for housing or while in public.  I’ve had several unacceptable encounters with in jobs, co.workers making inappropriate comments, I tend to work in male dominated fields and certain men have expressed a desire to either ” join or change my ways” and when I combat their words they begin to target me..one example I was fired from a restaurant in Florida , I had put in a complaint about a co.worker harassing me, making hate comments and threatening me, my general manager pulled me aside and said ” you should be LESS OUT, if you know what I mean” the harassment continued and elevated so I approached management again, they said it was up to me to make peace with him. And later called me at home and said I was fired. I took this to an ethical violations group and I was threatened with big lawyers and no way to “win” with a he said she said situation, from their lawyer…my lawyer said it would be long and hard but possible…we settled with a severance check and a loose apology letter…assholes!

Have you experienced microagressions based on your identity? Think everyday indignities & slights that you experience, but would not characterize as discrimination. Please describe in your own words. Yes, absolutly…people take the liberty to speak ignorance and hate often. From gawking stares of disgust, to out loud comments ” hey dude, or whatever you are, gross!, You’re not ONE of THOSE that wants to be a man are you? ” I’ve offered my landlord tea or something to drink and he always says ” what you trying to do make me gay” he often makes homophobic comments as if it’s a joke.

Tell us about your access to health care in Western PA. Has it been LGBTQ competent (or not?) I find it not to be an issue with my needs, and I hear positive stories from friends with more specific needs.

Are there issues impacting your LGBTQ neighbors that aren’t visible or part of the local dialogue? Not to my knowledge

What would you like to see elected officials do to improve life for LGBTQ Pennsylvanians? Acceptance speech from those with a platform is important, laws protecting, and abolishing discrimination is crucial, hate criminalized to the fullest.

Please share a lived experience, anecdote or fact about life as an LGBTQ person in your community. I feel cultivating a no apology energy field has gotten me far, never being hesitant to educate by example and with a fist full of words. It’s survival out here and being a soldier is a power.

Beyond discrimination, what other barriers create challenges for your LGBTQ neighbors? We are still considered a minority, although our numbers are large. There are still issues around recognizing same sex couple unions, there is so much accepted ignorance, lgbtq folks are not safe not do we completely feel safe and that’s a fuckin problem

Share your own story with the AMPLIFY project via our online form.

What is your greatest fear for the LGBTQ community in Western Pennsylvania?  With the digressions of safe laws for women and trans in the military, i fear more protections being removed entirely. Having to start ALL over, and more people being hurt in the process.

What is your greatest hope for the LGBTQ community in Western Pennsylvania? That one day we won’t need and these discussions.

What can allies do to support your LGBTQ community? Be loud about their support and acceptance

How can gay men and lesbians support the bisexual, transgender and queer members of our community? I feel we do, and i see no difference.

What motivated you to take part in this project? As a queer human i support anything that brings visibility and acceptance to lgbtqa

Finally, what question should I have asked? Please also share your answer. What’s my favorite food? Mexican!

Thank you, a. drift arguello.