Add this button (badge) to your website to show your support for the unionized journalists of the Pittsburgh Post-Gazette. You can use this code if you like. I hope to see blogs across the region

How is the contract situation at the PG?
Not good. The Newspaper Guild of Pittsburgh’s contract expired March 31, 2017. Since then, we’ve been negotiating with the Pittsburgh Post-Gazette and its highly profitable Toledo-based parent company, BCI. As of December 2018, we’re in the 22nd month of negotiations.

What does the Guild want?
A fair and equitable contract. The dedicated journalists who put out the news around the clock every single day for the greater Pittsburgh community have not had a raise in 13 years. Meanwhile our members have given back millions of dollars in concessions — part of the tens of millions of dollars the Blocks have received from all of the PG’S unions — as part of years-long pay cuts to help keep the Post-Gazette afloat.

To add insult to injury, the Blocks have violated federal labor law by refusing to properly fund our health insurance in 2018 despite an administrative law judge’s order to do so — and the PG has said it won’t comply with the judge’s order in 2019 either. That means our health insurance benefits, which already got worse this year thanks to the Blocks, will suffer again next year. Asked whether the company couldn’t afford the premium increase, Lowe said recently at the bargaining table that the PG “is not claiming an inability to pay.” 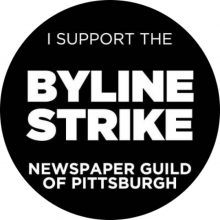 UPDATED Pgh Journalists, Writers, and Bloggers to Support Post-Gazette Staff with Solidarity Byline Strike Week of December 10 … Or Not? 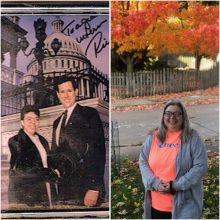 I’m profiled for the Post-Gazette by Tony Norman