With her military contractor career firmly behind her, single mother Laura finally has her son front-and-center in her life. But when a reporter appears demanding answers to a covered-up, decade-old story from her time in Afghanistan, the murky events of a single night resurface, revealing untold truths and painful consequences.

Our Q&A with Stage Manager Taylor Meszaros has been very well received so we were thrilled to have the opportunity to interview Clare Drobot. How do new plays take shape and debut on local stages? Clare is very much part of that creative process

Your Name: Clare Drobot
Your Pronouns: She/Her/Hers
Your Affiliation with this Production: Dramaturg

Please tell us about your very first impression of Pittsburgh: I first came to Pittsburgh to visit Carnegie Mellon my senior year in High School. I remember driving up with my mom from DC, rounding the curve after the Squirrel Hill tunnel and feeling a click. There are times you meet a city and know that it’s a place that could deeply change you and Pittsburgh did that for me.

Your role with City Theatre is Director of New Play Development. Please help us understand how staging a new play differs from staging an existing play and the types of duties you are responsible for in this process. The magic of new plays is that you’re inventing something for the first time. Everything is a challenge, because everything is new. There’s a lot of risk to that—as a team you’re figuring out how to tell a story and how to honor a playwright’s vision, while the playwright might still be in process with that vision. But with great risk comes great reward, right?

My work intersects with that in a number of ways: from working with Artistic Director Marc Masterson and Artistic Producer Reginald L. Douglas on season selection to collaborating with a writer, director, and cast as they start to shape the world by providing research and tracking character and story arcs to ensure that the story we’re trying to tell is told, and then finding ways to engage with our audience and bring in new community partners to foster conversation. I get to be part of the full journey of bringing a script to life. That work happens on previously produced plays as well, but in the case of a world premiere, it’s especially exciting because you’re building it from the ground up.

When a play lands, be it with raucous laughter or that good thick silence when you can tell an audience is leaning in, there’s nothing like knowing I had the privilege of supporting art that moves people.

How many new plays does City Theatre produce each season? How do you balance new plays with existing plays? It varies from year to year, but often we’ll produce at least two world premieres each season, in addition to offering developmental support to another ten plays through the Momentum Festival at the end of each season and our Momentum reading series which happens throughout the year. We also work with partner organizations around the country so some of our development work happens outside Pittsburgh. City also has a track record of offering second and third productions where the playwright is still in process with the script and making changes.

Is F*ck7thGrade by Jill Sobule an example of a new play developed by City Theatre? It is! That’s a play that we began working on in its earliest stages. We had the opportunity to work with Jill from its inception and then pair her with playwright Liza Birkenmeier and Director Lisa Peterson. However some of our plays have had significant development before City commits to them. We Are Among Us had workshops at New York Stage & Film and the O’Neill and a few other theaters prior to coming to City. Each play’s journey to our stage is unique.

City hosts new events and opportunities for the audience to engage the actors, technical team, playwright and more. Please describe these various opportunities and how the public can access them. We have a number of ways for patrons to engage with the process of theater, from a blog series called CitySpeaks to the chance for patrons to attend tech rehearsals and dinner, to post show discussions following Sunday productions. I’m also really proud of the theater’s City Connects program. It fosters unique partnerships with outside organizations based on shared values, meeting at the intersection of art and advocacy. This season we’re working with All for All, Achieva, Literacy Pittsburgh, and Strong Women Strong Girls on a variety of events and initiatives. We’ve also worked with Pittsburgh Arts & Lectures to host events with our playwrights through their Made Local series.

What about your job gives you the most satisfaction? It’s impossible to pick one thing. The team I’m part of at City is amazing. I’m really inspired by my colleagues and their dedication to making theater. My favorite moments are helping a playwright or creative team realize a vision and introducing it to an audience. When a play lands, be it with raucous laughter or that good thick silence when you can tell an audience is leaning in, there’s nothing like knowing I had the privilege of supporting art that moves people.

I grew up in a family that did not participate in cultural activities My blog and my involvement in the LGBTQ community opened those doors to me. And I hear two things a lot with regard to attending local theater – first, people mention that their mother/aunt/grandfather purchased season tickets and shares them (much like sports fans?) and second, that theater is not accessible, especially affordable, to the creative class itself. I have a lot of artist friends who have never been to a play. How do you convert that one family season subscription into new supporters? Likewise, how do you forge relationships with creators who are not connected to MFA or performance networks? Price should never be a barrier to art. We’re a theater that exists in Pittsburgh for a reason and I deeply believe that anyone should feel comfortable walking through the doors of City Theatre. The onus is on us as an organization to provide that welcome. It starts with offering programs like pick-your-price previews and continues with getting outside of our building. We’ve had a chance to collaborate with partners like Dreams of Hope, 1Hood Media, Alumni Theatre Company, All for All, the Brewhouse Association, and others to support organizations reaching new communities in Pittsburgh. Fostering that type of access is key to ensuring new generations of theatre goers and reaching beyond the immediate theater communities to say that plays can touch all audiences.

Please tell us about the first LGBTQ person that you knew and what impact they had on your life. In High School, one of my friends Alex was the first person I knew who was out. He was two grades ahead of me and was the epitome of cool. He introduced me to so much in terms of music, art, and how to live in your own skin. Northern Virginia for all its democratic leanings was still relatively conservative and especially in retrospect, I’m really struck by his bravery.

What is your love song for LGBTQ youth? A friend recently introduced me to Grace Petrie and ‘Black Tie’, while I’m not sure it’s a love song per se, feels infused with a spirit of love.

What are we going to appreciate about the new work ‘We Are Among Us?’ There’s a deep urgency to We Are Among Us that feels like it connects deeply to audiences. Director Adrienne Campbell-Holt and the design team have created a brilliantly spare world that showcases the dexterity of Stephen’s text and challenges the audience to ask big questions and investigate the world around them. The play explores America’s involvement in Afghanistan and the lasting effects of war, which shapes our lives in ways I don’t think we fully comprehend. I’d love to be a fly on the wall for audience’s post-show conversations.

We Are Among Us runs from May 11 – June 2, 2019. at City Theatre on Pittsburgh’s South Side. Tickets start at $15 with several Pick-Your-Price options starting at $5 as part of the venue’s radical hospitality commitment to make the arts accessible to everyone. 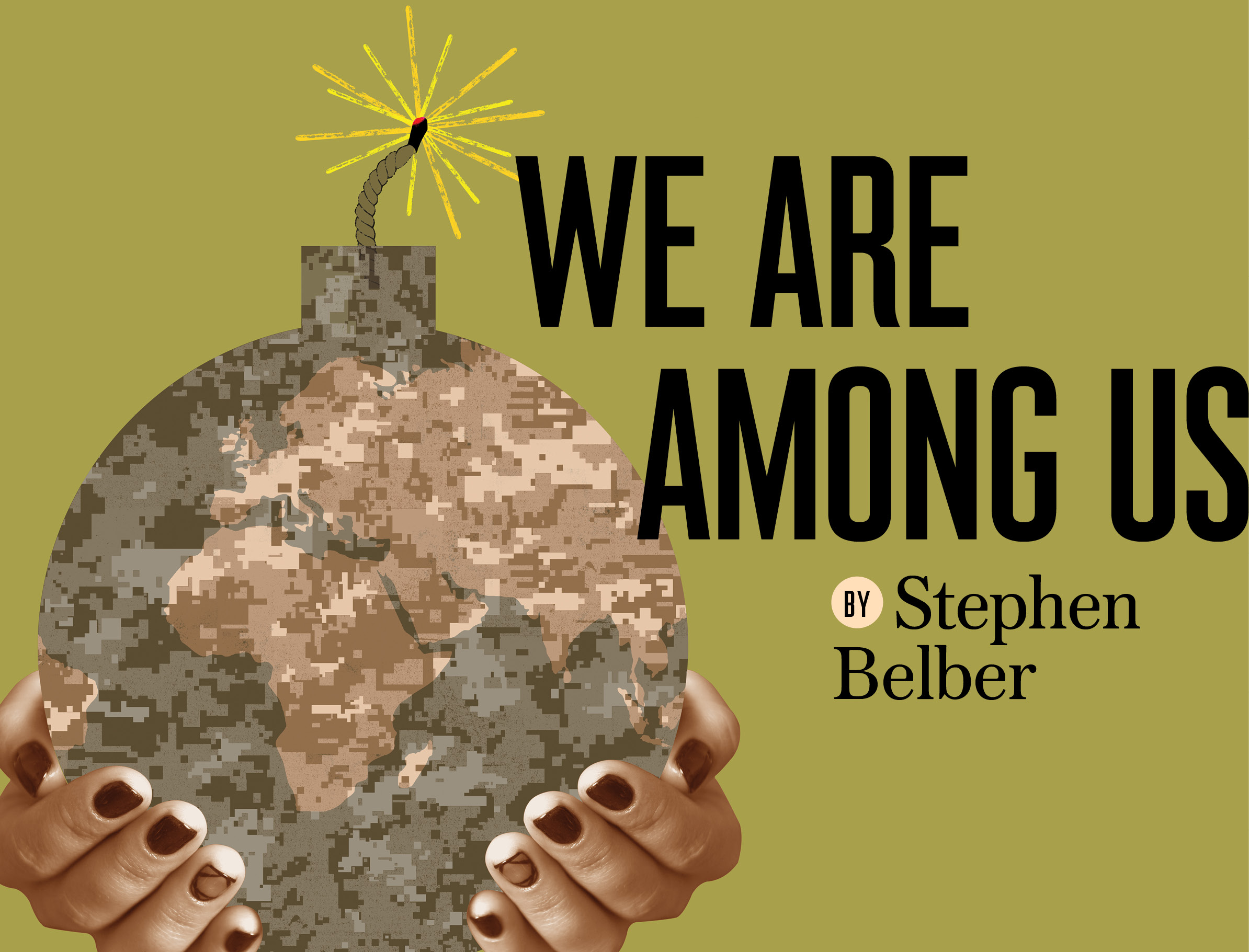