Ok, so I won this award this past Saturday night. Not a real lengthy period for reflection, but reflect I will.

I already told you what happened when I discovered that I won in this post.

Lots of people retweeted and shared and said congrats and all that good stuff. It was great, especially hearing from some long lost friends and at least one person whom I don’t actually like at all having to be nice to me. I’m shallow, but straightforward.

My love, Laura, took me out to dinner on Sunday to a local farm to table restaurant called Or, the Whale. We had dined their on New Years Eve and knew it was delicious if a bit stingy with the distribution of food stuffs. Who serves three kinds of cheese with exactly 4 crackers? But if you know what to order, you can get a substantial meal. We had the cheese plate (no) and split a green salad (yes, OMG, yes) and then I had a walnut pesto pasta that the sort of dish where you want to lick your bowl. And it was really nice because we were in the former Salvation Army Building celebrating a queer award. The host is a friend of a friend and graciously sent over some complimentary mocktails – I told him about my triumph because he is gay and recognized the organization GLAAD.

Then on Monday some journalist friends encouraged me to send out a press release tooting my own horn since Pittsburgh loves to celebrate a championship. I did so, but I haven’t had any takers. The only mentions so far came from 2 Political Junkies which was first out of the gate with a lovely post and the now-defunct ETRT newsletter that included my win among their final entries. BTW, I hate writing press releases especially about myself.

I tried to tell the niblings (all 13 and under) but they have no clue what a blog is or what it means to be the best at it. If I had received an award for my Insta, at least the 13 year old would get it. One can dream …

My friend Pam did something really nice and sent me a virtual casserole aka GrubHub gift card. Laura is going out of town later in the month for a work trip so I will definitely put this to use . 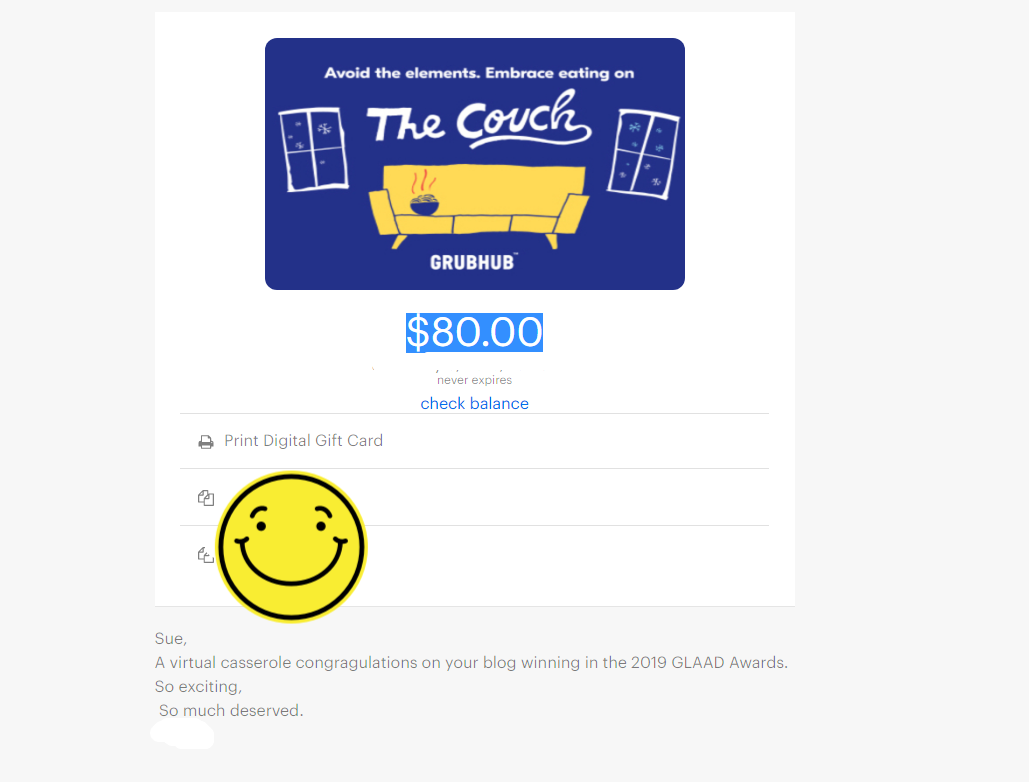 I decided to make some lemonade in this situation and contacted a few blog sites offering to write a guest post – gratis – to really lean into the concept of how blogs are supposed to work. It hasn’t worked out thus far, but maybe they are just mulling it over.

So meanwhile this week,  I also had to follow up on two vet appts (Simon and Anna), get myself to both therapy and my p-doc appt on different days, transform our bathroom into a kitten staging area when we unexpectedly caught a 6 week old ginger. I speent several months of my life on the phone with Highmark trying to determine if and how I’m eligible for a meales titer and booster (still not resolved.) Then the kitten got stuck between the wall and the closet. I woke up well before normal time several days this week to try to capture the other cats and the mama. I’m also researching dog food for Ana’s hypothyroidism. I wrote several blog posts. I had to pose for a photo for a PublicSource essay that I wrote and then do a lengthy interview for a completely different PublicSource story someone else is writing. Ana goes back to the vet tonight, tomorrow is electronics recycling at the Pittsburgh Mills.

In other words, life goes on. I have no idea if the local media will give a damn about this award. And it isn’t so much that I want to be fawned over as that I want to talk about it – to talk about blogging and LGBTQ and queer women winning thing and 14 years of hard work. I miss those conversations with other bloggers. And it does seem like the tv stations in particular gush about every accolade, every runner-up in any contest, etc. I guess I just thought an award in the media field would resonate?

To be fair, none of my own family or Laura’s family have responded either and some of them are media professionals. Maybe I’m overestimating what it means or overestimating how much their positive approval means to me? And to be fair, several outlets are pretty pissed with me over other topics so I don’t expect them to pick this up. Maybe if I can get Pittsburgh named the outstanding place to BE a LGBTQ  blogger – BAM!

I’m a little disappointed in my LGBTQ community not responding with a bit more effort. I’m going to chalk that up to the struggle to survive leaving little time to celebrate accomplishments outside of your own wheelhouse.  I did literally hope for a tiara and scepter moment, but maybe next year.

So very little in the way of tangible rewards or recognition by the muckety mucks in the LGBTQ community and the larger community. But a lot of great people have reached out to me, some I haven’t heard from in years. And that’s super lovely. And we both know that I didn’t earn this award by conventional blogging tactics.

Who knows what tomorrow or next week will bring? Parades, sandwiches, cupcakes named after my blog, an official mocktail, maybe even a tweet from a Democrat, a Rob Rogers cartoon tying in Santorum, giant wads of cash donations to blogging proects.  I’m sure some people just don’t care because of the Sue Kerr part while others aren’t paying attention to LGBTQ anything. But I’m really proud of this award. And lots of people should know that a fat cis white disabled dyke can win a national award for having an opinion. We need more opinions more blogs, more exercises in conversation.