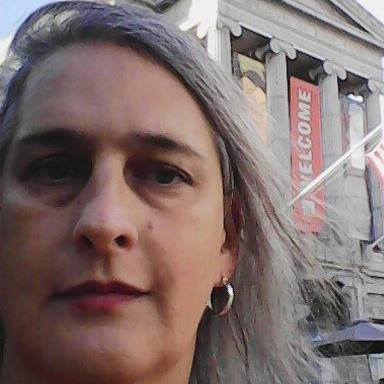 I shouldn’t make presumptions about how folks would react: that I should be prepared for generosity as well as a negative reaction. After the decades of gaslighting, I still struggle to keep this in mind, but I do believe that there is a lot of good will among straight/cis people for the LGBTQ+ community.

How do you describe your identity? woman generally; other labels tend to be situational (white, trans, lesbian, etc.)

Please describe your coming out experience. Where did you find support? What challenges did you face? I came out in my late 40s, and didn’t have one, but several such experiences. The most significant were probably the first time I presented as female in a public space (at a meeting of a now defunct Pgh trans support/social group, Oct. 2011); the first time I came out to a friend (while visiting her and her family for Thanksgiving, Nov. 2011); the first time I came out to a family member (my sis, end of Xmas vacation, Dec. 2011 – she gifted me a wool coat that was too big for her); coming out to my parents up in Maine (Aug. 2013, ten months before my dad died); and my court date to have my legal name changed (April 10, 2014). The main challenge I faced was simply overcoming the decades of gaslighting and the self-loathing that had accumulated in that time. My family and friends (both in the Pgh LGBTQ+ community and from before) have been my main source of support. I’ve also found Pgh to be a welcoming city

How would you describe yourself NOW in terms of “being out”? I’d say I’m pretty out. I don’t cry my identity from the rooftops — I default to stealth mode (since I can) when I’m out and about attending events or shopping — but I’m long since out to all my Facebook friends, including folks from high school and college as well as my neighborhood in Pgh, and am out to some folks in my apartment building. I was on the board of the Pgh Equality Center for a couple of years. I’ve also published pieces on trans/LGBTQ+ issues and themes on *Huffington Post* (where I blogged through 2016-17), *Medium* (where I just started posting), and in several literary journals, and I’ve been pretty active over the past year on Twitter.

Tell me about the first LGBTQ person whom you met. What impact did they have on your life? The first “out” LGBTQ+ person I remember meeting was at college. He was a super-sweet gay man and POC from the Carolinas who lived on my dorm floor my freshman year. He and the other gay male classmates I met over the course of the next couple of years affirmed for me that it was possible to be out, queer, and happy, though since I wasn’t attracted to men and wasn’t yet able to embrace being trans, I wasn’t sure how much their example applied to me.

Past or present, favorite LGBTQ character or creator in television, film or literature? Please tell us why.  That’s a tough question, since I’ve read and seen a lot. I’ll answer it as follows. I’ve done a lot of mining of the past for things that helped me shape my queer identity absent any obvious role models (since I didn’t embrace being trans until my late 40s), and an example of an early influence that I wrote a “queer appreciation” of in my last piece for *Huff Post* (Dec. 2017) was the old Xmas special *Rudolph the Red Nosed Reindeer*. I remember also being strongly moved by the documentary *The Life and Times of Harvey Milk*, which I saw in college in the 1980s.

How do you stay informed about LGBTQ issues? Mainly Twitter and Facebook (ya I’m one of those news consumers)

Describe your geographical community. I live in a suburb of Pgh, and have found it to be very welcoming. I’m active in my community’s Indivisible group, and am a familiar face to many in my immediate neighborhood since I go for long walks most days (though I’m only selectively out). My hometown in eastern Maine, by contrast, was not welcoming to LGBTQ+ folks when I was growing up there in the late ’60s, ’70s, and early ’80s, though Maine has since become a much more LGBTQ+ friendly place (as I mentioned, I’m connected on Facebook with many folks from high school).

Speaking as a non-native, the Pgh/Allegheny County LGBTQ+ community seems relatively robust but insular. Many lesbian and gay couples live in my neighborhood, for example, but they seem to have long since forged their connections, and not on the whole to be that interested in embracing outsiders. The trans/GNC community is more spread out across the area, and less visible.

Have you ever experienced discrimination based on your identity? Specifically, in a job setting, when applying for housing or while in public.  I experienced some microaggressions when I first started presenting as female in 2013-14, but nothing more significant. I work online for a standardized testing company, and the colleagues I’m out to have been fine. I moved into my current apartment shortly before coming out, and my realty company has given me no cause for complaint.

Have you experienced microagressions based on your identity? Think everyday indignities & slights that you experience, but would not characterize as discrimination. Please describe in your own words. Yes, around the time I started presenting as female, as I said above. The “worst” of these involved intentional misgendering. Other than that, there were some smirking eww-what-is-it looks.

Tell us about your access to health care in Western PA. Has it been LGBTQ competent (or not?) My interactions with health care providers in Pgh have been positive overall: respectful, and trans competent for the most part.

Are there issues impacting your LGBTQ neighbors that aren’t visible or part of the local dialogue? Hard to say since I’m probably not as hooked into local dialogues as others are. I know from others’ experiences I hear about that trans/GNC employees and students still face a lot of crap, and the experiences of grade and high school students in particular seem not to be receiving much attention.

What would you like to see elected officials do to improve life for LGBTQ Pennsylvanians? Including sexual orientation and gender identity as legally protected classes and banning conversion therapy statewide would be a great start.

Please share a lived experience, anecdote or fact about life as an LGBTQ person in your community. After I changed my legal name in 2014, I sent a letter to my realty company notifying them, and then spent an anxious few weeks waiting for a response. At one point shortly before I heard back from them, a gal who was (and still is) part of the maintenance staff was in my apartment doing a small repair, and since I was friendly with her, I decided to ask her if she had heard anything. I asked the question in general terms, and when she indicated that she hadn’t heard anything, I decided to out myself to her. She smiled, said “Welcome Stas (my nickname)!,” and assured me that they would be fine with the change — which as I indicated above, has pretty much been the case. And she has been an ally ever since. Not being from the area, I took from this that I shouldn’t make presumptions about how folks would react: that I should be prepared for generosity as well as a negative reaction. After the decades of gaslighting, I still struggle to keep this in mind, but I do believe that there is a lot of good will among straight/cis people for the LGBTQ+ community.

Beyond discrimination, what other barriers create challenges for your LGBTQ neighbors? For now, I worry less about the local than the national situation: the hostility that the current administration demonstrates towards us, and

What LGBTQ friendly resources are available for your neighbors? The usual stuff online: PFLAG, HRC, NCTE, etc. To those whom I’m out to, I also think of myself as a resource, in particular on social media.

What is your greatest fear for the LGBTQ community in Western Pennsylvania?  My greatest immediate fear is the possibility that some fringe whackjob will show up at Pride or OutRageous Bingo or some other mass queer event with his arsenal and start shooting.

What is your greatest hope for the LGBTQ community in Western Pennsylvania? We have LGBTQ+-friendly mayors in Pgh and in my borough, an LGBTQ+-friendly governor in Harrisburg, and a rising generation for whom issues around sexual orientation and gender ID seem to be less fraught on the whole than they were when I was young. These are all reasons for hope.


What pieces of local or regional LGBTQ history would you like to preserve and why? I would love to see photos, documents, and anecdotes about the trans/GNC community exhumed and preserved, since we were until recently all but invisible.

What can allies do to support your LGBTQ community? Take an interest in the issues that affect us, and SHOW UP (e.g., at Pride).

How can gay men and lesbians support the bisexual, transgender and queer members of our community? Some of the least pleasant interactions I’ve had since coming out have been with older gay men and lesbians in Pgh. There seems to be a presumption that since they’re part of the LGBTQ+ community, they don’t need to learn about us. So the biggest thing that comes to mind is to set aside what seems to be a presumption of privilege and approach us with open ears and hearts.

What motivated you to take part in this project? We in the trans community are facing an existential threat from the current administration in DC, and are still widely misunderstood even within the broader LGBTQ+ community. The Trans Day of Visibility (TDOV) just passed, and I contribute this info in observation of

Finally, what question should I have asked? Please also share your answer. Q: What is the most important issue to you that doesn’t solely or primarily bear on the LGBTQ+ community? A: Probably climate change.