Welcome to the slightly-delayed inaugural fish fry Friday review in this #GrandJuryReport era. You can read more about this feature, including our criteria at this blog post. 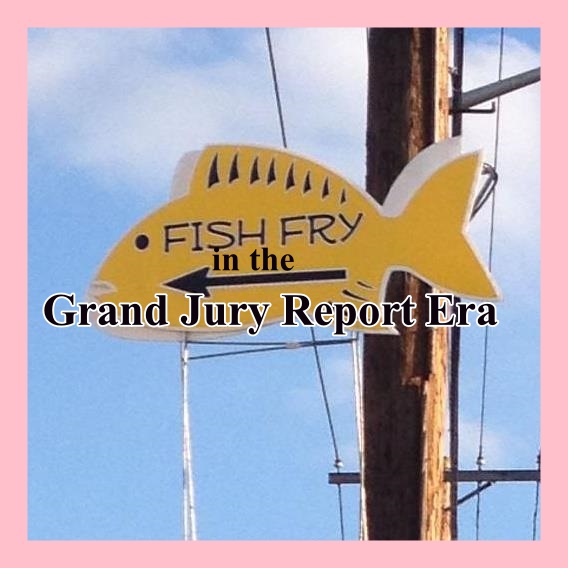 For this first week, I was feeling a bit anxious so Ledcat suggested that we try the take-out option of a fry we’ve visited in the past. (Read review 1 and review 2 here) It took us a few minutes to find the right phone number; Google directed us to the main church number which had no information on the fish fry. But I dug up a flyer and that gave us the right place to call.

We opted for a small fish sandwich with two sides, macaroni & coleslaw; a shrimp dinner with a side of fries, cheese sticks, and a half dozen pierogies.  Our order was missing one item – the coleslaw.

The food was packaged in paper trays wrapped in big pieces of paper so that made me happy – no styrofoam. We were able to compost everything because it wasn’t grease stained. The food was still reasonably warm when Laura arrived home.

The fish sandwich was good, but not great. The portion size was good, but it just lacked any special punch. The shrimp were also perfectly fine, a little heavy on the breading. The fries were a bit limp as you’d expect but still tasty.

The macaroni and cheese was delicious; we both immediately put it at the top of our list. The pierogies, however, were just meh. They were mixed in a sea of onion chunks, but it was almost like someone had diced the pierogies, too. Now I need to be clear – the pierogies were prepared by students at the Community Kitchen culinary program in a partnership with Riverview. And I think that’s a solid choice. It is entirely possible that on this first night of Lent and the first night of a new partnership, things didn’t go so well.  It is unclear if the macaroni and cheese came from CK as well, if so – that’s a winner.

Laura reported that the place was packed and a bit chaotic which you’d expect on a first night. They handed her the order and sent her on her way. She arrived home and realized that she hadn’t paid. I contacted the church by FB messenger and arranged to send a check.

Since I did not actually go to the church, I have to make educated guesses on several factors. Ledcat thinks I am far too hard on the fish fry purveyors of Pittsburgh and refuses to offer her input on signage or engagement. “I ordered my fish; they gave me my fish, what else is there?” in her famous words.

Riverview takes fish fry work seriously. They have a dedicated Facebook page, events, lots of flyers, and as I mentioned above – community engagement with organizations doing good work in the community. The menu includes soup choices, fried pickle chips, haluski, and other cheese options. They have desserts and drinks. It is pretty robust. The noticeable missing item is a broiled/baked fish.

For a take out option, it is not bad. We may go back and dine-in, but with Ledcat’s blood pressure issues – she’s reluctant to eat constant fried foods so it is up in the air if we return this season.

When I was in high school and growing increasingly disgusted by the leadership of predator John Wellinger, I temporarily sought refuge at the Presbyterian Church. It was already part of our lives – both the Boy and Girl Scouts met there so it was a natural fit to join the youth group. Most of the members were my classmates and friends. I was not the least bit concerned about the theological differences; I just wanted to feel safe and social. I wasn’t the only Catholic kid who made that decision. So I look at the Presbyterian Church as a source of solace and comfort during a terrible period of my life.

It broke my heart to watch the Presbytery rip itself apart over LGBTQ issues, but I believe that fissure is deeply tied to the violence and corruption within Christianity. I’d like to think there can be good churches in the midst of so much harm, but I suspect that is simply wishful thinking.

I am grateful that the members of this congregation claim a pro-LGBTQ space and do so much to build up the Northside. I reached out to the church to ask them to do a Q&A because I’d like to know how they are navigating the post Grand Jury Report era.