We decided to give Riverview another chance after a somewhat lackluster first try earlier in the month. This time we dined-in.

I reached out via Facebook to inquire about the anticipated wait and someone responded to me promptly which was helpful. So I scooped up Laura from the T station and off we drove up the hill and down the block. Riverview is very close to Riverview Park and prominently located along Perrysville Avenue.  They have a small parking lot and pretty good amount of street parking. Because most of the business seems to be take-out, we had no problem securing a good spot.

Someone did their marketing homework – there were signs everywhere. Signs with arrows, signs on banners, signs on special display thingies, and more. We followed the signs and the  little boy singing “I smell fish, I smell fish” in harmony with his father into the anterior of the building and down the metal steps. I did note that there was an elevator. 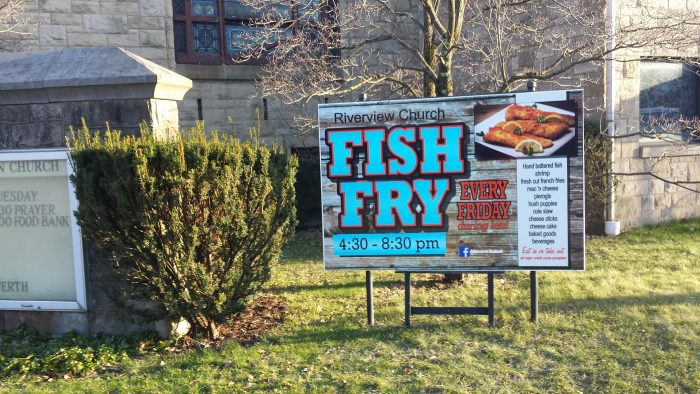 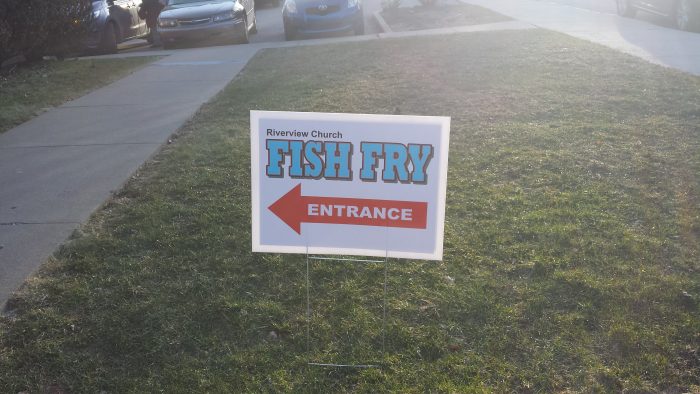 We would our way around into a hall filled with tables and chairs. And a kitchen. And more signs along the wall explaining the wait, the menu, the event itself, etc. A very key piece of information – the fish is freshly hand breaded and made to order. So that explains a bit of the delay.  And it uses good communication skills to engage the people patronizing the event.

So we stood in line for about 20 minutes. The line was not divided by to-go/eat-in orders, everyone just mingled together. They had two people accepting orders and answering questions.

They men was pretty typical with small and large options, the usual sides  and two types of cheesecake. Oh, Presbyterians, always adding an atypical twist to the Catholic tradition – ha.

Laura ordered a fried fish sandwich dinner with macaroni & cheese as well as coleslaw. I opted for the shrimp dinner and asked to substitute mac & cheese for fries (yes!) then we ordered pierogies to share. I ordered clam chowder. And we both ordered a can of pop. Our total was about $28.00 and they did take debit/credit cards.

We were then handed a number and asked to seat ourselves. We stopped at the beverage station to select our cans of pop and found two nearby seats at a table two men already occupied. These men were pleasant to us and then had a lively discussion between themselves on RuPaul’s drag race. I learned more about Trixie Mattel from this fish fry conversation than via any actual LGBTQ media source I had read that day.

The wait was a bit lengthy, but we had been well prepared by the signage. The volunteers trundled red carts around to serve the food, alternating between calling out numbers of the dine-in folks and first names for the to-go orders. We waited about 30 minutes for our meal, but we sipped our pop and learned about Ru & Trixie to pass the time. Plus, we talked with one another about the day.

The room was smaller than other venues, but comfortable. The tables were about 75% occupied, including a mix of dine-in folks and folks waiting for to-go orders.

Our table was set with a paper placemat that included information about the church and some cute “fill this space” empty ads. I was irritated to see that our elected officials had bought advertising. This makes me so angry – elected officials should NOT be spending money on religious events. I’m sure it was their campaign funding, not public funds – but it looks very crass and I immediately wondered if they invested funds in every single fish fry in their district?

It is tacky and disrespectful for the Presbyterians to accept those sponsorships that could be better and more appropriately invested in secular projects serving marginalized folks. This was a crass move. This placemat was supposed to inform me about the event and the church. 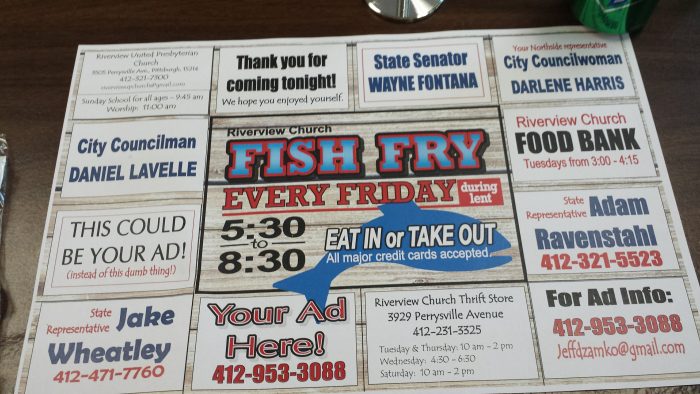 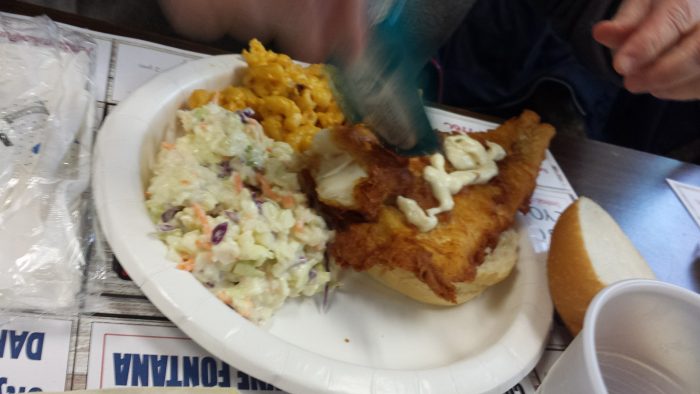 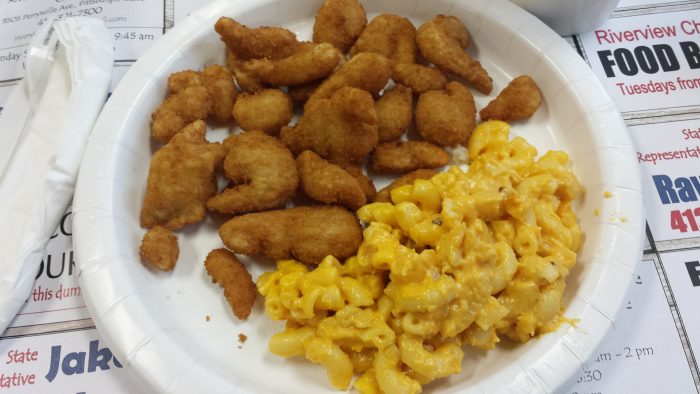 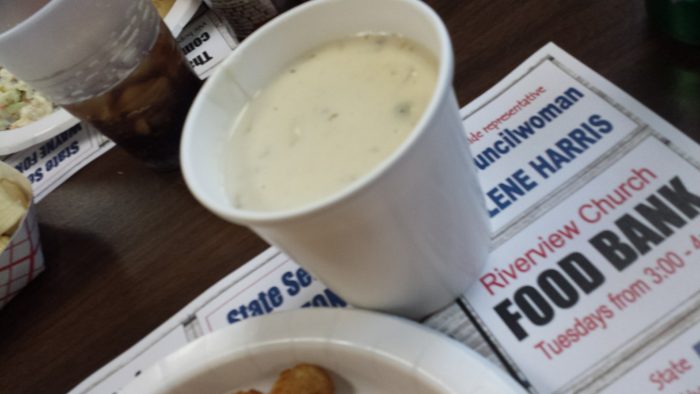 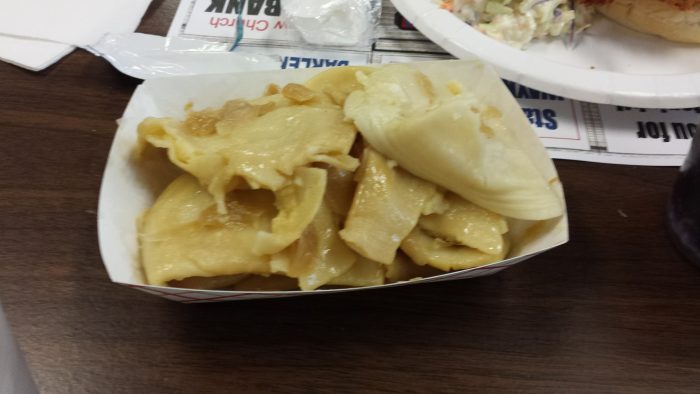 The fish was flaky and delicious. The shrimp was pretty typical, but fine. The macaroni and cheese are delicious. The pierogies were good, not homemade but good. The cole slaw was good. And the clam chowder was very tasty.

I was pleased to see almost no styrofoam, but there was a lot of landfill materials in the disposable tablesettings. Well, almost 100% except for the plastic cups and the pop cans. Riverview’s proximity to a City park (and all those elected official donations) positions them to be on the forefront of sustainability efforts next year – like a composting project for the park.

The volunteers were very nice. They were hustling and good-natured. One gentleman brought me a glass of tap water. A few had on hairnets which generated a few good-natured comments. They were pretty busy so no one seem to have time to engage people or walk the floor looking for opportunities to talk.

There is no real reason for me to feel hesitant about embracing this fish fry. They get a lot of things really right and the areas for improvement are not huge. I do complain about people launching hipster, foodie fish fries and this is a pretty traditional version.

What bothers me is that Riverview started a fish fry to raise funds for their own needs and this will inevitably eat into the proceeds other longstanding local fish fries count on each year. I remember when the Delta Foundation launched Extreme Bingo in direct response to OUTrageous Bingo. It felt icky because most of us knew that a directly competitive fundraiser is not the same thing as a directly competitive for-profit enterprise. Extreme bingo didn’t last and OUTrageous Bingo is stronger than ever after 20 years. But a lot of people remember.

I don’t know if Riverview factored in the nearby fish fries of their faith community neighbors, I hope so. I don’t know what turnout has been like for St. Peter in Deutschtown, Most Holy Name in Troy Hill, Risen Lord in Marshall-Shadeland, etc. I do know Assumption in Bellevue is bringing in record numbers, but that’s a bit further away and has resources the other three combined don’t have.

The reason I was able to pin down the source of my discomfort, in fact, was the word-for-word similarity between the Assumption signage and the Riverview signage.

There are probably the sorts of questions that people don’t typically worry about with fish fries. Catholics and Presbyterians are on the same side in the so-called culture wars. A nice fish fry doesn’t undo millenia of oppressive harm to vulnerable people worldwide. Perhaps my unease is unwarranted. It is definitely something I cannot confirm. I would need to talk with the parishes and I doubt they would share this information.

So I hope I’m wrong.

One more regular Friday during Lent this week (March 23) and then Good Friday will be here. We typically go to the ELKS on Good Friday b/c most parishes are not open.