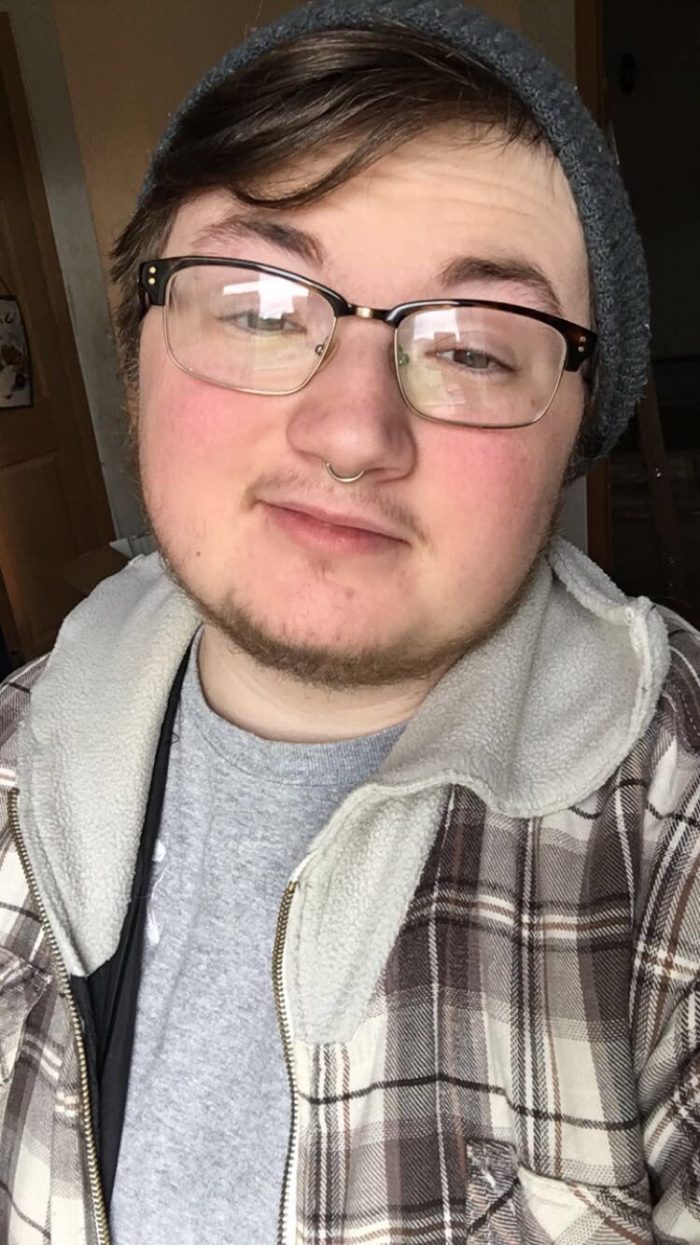 The rural nature of McKean County serves as a literal, physical barrier. It can be difficult to travel to metropolitan areas like Pittsburgh and Erie, especially if you’re a young student, where people are more accepting.

How do you describe your identity?  I identify as a queer trans man


Please describe your coming out experience. Where did you find support? What challenges did you face? I first had an inkling of my trans identity at the beginning of my sophomore year of college. I’d never been very feminine, but at that point it was like my brain went into bodyguard mode to try and protect me. I bought skirts and dresses and all kinds of makeup. I’d never worn lipstick in my life, but I wore it for months. Then I started identifying as genderqueer, which seemed more comfortable, but still not quite right. Finally, with help from the other members of the campus LGBTQ group, I started presenting publicly as male. I came out to my parents much later, because I wanted to begin HRT. They still don’t understand. They tolerate my identity, but I don’t think they accept me.

How would you describe yourself NOW in terms of “being out”? Things are better now. I’ve been on testosterone since February 9, 2017. I have a wonderful, beautiful girlfriend; our two-year anniversary was December 16. I have friends who love me and support me. I was able to find an internship with a supervisor who was incredibly accepting and kind. Now I’m in AmeriCorps, and my supervisor always takes my comfort and safety into account when planning projects for me.

Tell me about the first LGBTQ person whom you met. What impact did they have on your life? I met Justin when I was in middle school. Unbeknownst to me, he was my cousin’s boyfriend; everyone in my family just called him a friend. I ended up speaking with him more often than my cousin. He told me how hard it was for my cousin to accept himself because of his mother being so religious. Justin has been a big part of my cousin finally finding the courage to be himself. I’d never understood being gay before then, nor how truly difficult it could be to find comfort in your identity and the courage to be your true self, because I hadn’t had to think about it at that point. I don’t speak to Justin anymore, but not because I don’t want to. I think about him a lot.

Past or present, favorite LGBTQ character or creator in television, film or literature? Please tell us why. I will always love the movie Carol. It’s based on a 1952 book called The Price of Salt by Patricia Highsmith. The movie stars Cate Blanchett and Rooney Mara as lovers in New York City. It only came out in 2015, but it really struck a chord with me. You always see movies with queer characters where they die, or they’re left heartbroken; whatever happens, it’s always an unhappy ending. With Carol, the ending is hopeful and happy, a stark turn from the norm. It’s so beautifully done, so tender, and you can feel the love between Blanchett and Mara’s characters. I think that it will always be my favorite.

Describe your geographical community. McKean County is very rural. My friend, a teacher of mine in a high school, is also transitioning, and they wouldn’t waive the newspaper announcements of her name change, which she requested for her safety. It’s a very red area. There are still Trump signs in people’s yards, including at my parents’ home. My family is relatively well-known in our town’s immediate vicinity, so I have to avoid going places with my parents in case someone recognizes me somehow.

Describe your local or regional LGBTQ community. Growing up, I didn’t really know anyone in the community. There was talk of a couple gay kids in high school, and I befriended a boy who’d become sort of an outcast. McKean County is a very red area, so there wasn’t much for me there. Clarion, while also pretty conservative, has the university, and that’s where I really found comfort. The college has plenty of resources, and almost every professor I had was very accepting. The student office even let me change my name on my ID card, gave me a new email address to reflect my chosen name, and made sure that my name on every class roster read “Maxwell” instead of my dead name. I felt very safe there.

Have you ever experienced discrimination based on your identity? Specifically, in a job setting, when applying for housing or while in public.  To my knowledge, I have not. Since coming out, I’ve been very open about my identity when applying for jobs and housing. It hasn’t proven to be an issue yet, but there’s always a first time for everything, I suppose.

Have you experienced microagressions based on your identity? Think everyday indignities & slights that you experience, but would not characterize as discrimination. Please describe in your own words. A recent instance that comes to mind is when I was at a gas station in Ohio, parked at the tire air pump digging for quarters, and a man parked next to me, waiting for the pump. I realized that I didn’t have enough change for the pump and pulled out of the spot. Apparently this man was irritated that I’d parked there with seemingly no intention of using the pump, so he indirectly called me a “poofer,” probably because I was wearing a pink sweatshirt. I’ve also been called “it” on several occasions by people on social media.

Tell us about your access to health care in Western PA. Has it been LGBTQ competent (or not?) I had to travel to Pittsburgh for HRT, and I switched my primary care to Metro Community Health Center in I refuse to go anywhere else. They’ve been amazing, always kind and helpful. I also found that the Urgent Care doctors in Clarion were very accepting, which surprised me. But I would never go to any doctor in McKean County.

Are there issues impacting your LGBTQ neighbors that aren’t visible or part of the local dialogue? Healthcare, definitely. My friend, the schoolteacher, has to travel to Erie for her HRT appointments. I also heard from several trans friends that the psychiatric center in Clarion wouldn’t acknowledge their identities. Mostly I think it’s because of the counties’ conservative natures, but that doesn’t change the fact that some of us require different treatment when it comes to medicine.

What would you like to see elected officials do to improve life for LGBTQ Pennsylvanians? I would love to see easier access to healthcare, both mental and physical. I’d also like the process of changing my name and gender marker to be much simpler and much less expensive. Also, just acknowledgment of the community in general. It would’ve been a smoother journey for me if I’d known that trans people existed before the age of 18.

Please share a lived experience, anecdote or fact about life as an LGBTQ person in your community. I worked in a little grocery store in Clarion for two years during college. When I came out to one employee, she had several questions, but she was very respectful in asking them and never treated me differently than anyone else. When I became her Facebook friend, I was horrified to find that she was a staunch evangelical conservative with several nasty transphobic posts on her page. (I’m sure what she found on my page was just as shocking to her.) Her thinking was that I was somehow different from “those other transgenders,” that I wasn’t going to openly voice my thoughts and opinions on policies affecting my community; basically, I was going to be quiet about who I am so she didn’t have to listen to it. I’m no different than the trans people in photos at protests and marches, chanting and shouting, with their faces painted and their pride flags held high. They are my siblings, and I love them. I want our voices to be heard. We need people like my ex-coworker to finally listen.

Beyond discrimination, what other barriers create challenges for your LGBTQ neighbors? I would definitely say that the rural nature of McKean County serves as a literal, physical barrier. It can be difficult to travel to metropolitan areas like Pittsburgh and Erie, especially if you’re a young student, where people are more accepting.

What LGBTQ friendly resources are available for your neighbors? McKean County has zip for resources, as far as I know. I never found anything there that could help me. Clarion has the college, which has an LGBTQ group on campus and frequently offers talks and presentations on LGBTQ topics. The staff at Metro Community Health Center in Swissvale has been incredible; I highly recommend them to anyone in the LGBTQ community, especially trans individuals.

What is your greatest fear for the LGBTQ community in Western Pennsylvania?  The ignorance that Trump is encouraging is terrifying. My greatest fear is him being re-elected. I honestly don’t think that I’ll survive.

What is your greatest hope for the LGBTQ community in Western Pennsylvania? I hope that we’re able to come together more easily in the near future, that it becomes easier to be connected to each other and find support and love within the community.


What can allies do to support your LGBTQ community? To be an ally, you need to be sure that you aren’t confusing acceptance with tolerance. They aren’t the same.

How can gay men and lesbians support the bisexual, transgender and queer members of our community? This is a great question! It’s really disheartening to see how many members of our own community discount our experiences and identities. Just listening to us would be a good first step. We need to lift each other up, not tear each other down.

What motivated you to take part in this project? I want people like me to know that it does get better. You are not sick, you are not broken; you are you, and you are brave and strong. I wish I’d known who I am earlier, but it doesn’t always happen that way, and that’s okay. Finding yourself can take a long time, but it’s worth it.

Finally, what question should I have asked? Please also share your answer. You asked all the right questions. Thank you for your inclusivity.