Last week, I was tagged in a tweet informing me that I would make a great #Token Sophia. The tweeter was channeling Bea Arthur so I understood the Sophia reference if not the rest …

Lo and behold, I find out that The Golden Gays of NYC are bringing a very special holiday Golden Girls tribute show to Pittsburgh, actually to Bellevue at the Mariposa Theater. So of course, I was intrigued and had to chat with a Golden Gay Dorothy via a Q&A. 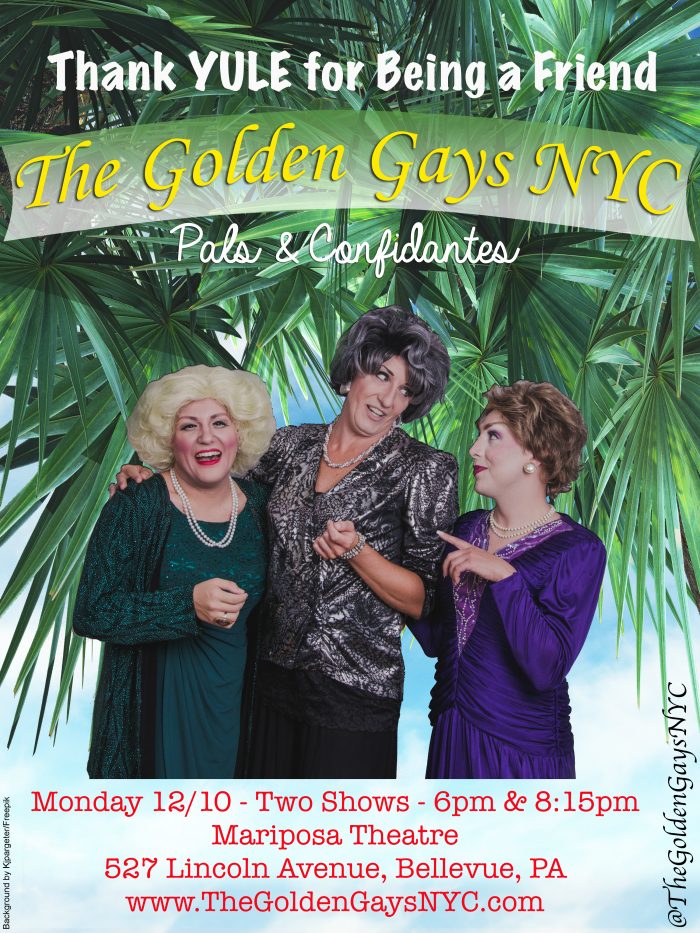 Your Name: Jason B. Schmidt

Your Pronouns: he him

Your Affiliation with The Golden Gays NYC: I am the Bea Arthur. I play Dorothy; co-creator, administrative type, ticket-sale worrier, thrift store and Amazon shopper

How do you describe your identity? I feel that my generation of gayyyyy is the one that said bi guys were really gay they just needed to decide. I don’t feel that way, but I did say I was bi before I was ready to say I was gay. So, it’s been interesting experiencing the new language about identity. On Facebook I identify as queer. Growing up in Texas that was a four letter word that was hurled at me, so that’s also interesting. I identify as gay or queer and as mostly male-ish.

Please tell us about your very first impression of Pittsburgh: I went to a theatre competition at Carnegie Mellon in college around 2001, I think. We were completely immersed in that whole thing, but I remember thinking “I could live here, it’s cute.”

What Pittsburgh creators – writers, musicians, poets, etc – have influenced your work? Is there anyone with whom you’d like to collaborate? Caren Hearne who owns and operates the Mariposa Theatre for Young People is the reason we are able to bring our show to Pittsburgh. She is one of my husband Anthony Giorgio (the director/choreographer/manager of our show)’s dearest friends. She is a very talented and hard-working lady.

Please tell us about the first LGBTQ person that you knew and what impact they had on your life. My mom’s uncle Lon was gay and he was “married” to my “Aunt” Russ. They lived in San Diego. They were always talked about as THE NICEST MEN YOU’LL EVER MEET. And I just love that. I didn’t even know what any of that meant as a kid, but I am glad that in the back of my mind I knew that people could talk NICELY about gay people.

What is your love song for LGBTQ youth? in honor of our musical director Mason Griffin’s favorite composer Jerry Herman, the song is “Song on the Sand” from La Cage Aux Folles. He and Blanche (Andy Crosten) danced to that song at their wedding this past October.

Tell us about creating the Thank Yule for Being a Friend! show.  For this show our Rose, Gerry Mastrolia took the reins. Whether done consciously or not, Rose really drives this show, as her character is the most nostalgic about Christmas. We’ve got the formula for how we like to tell stories down, and Gerry stuck to that, and created a very funny, heartfelt, ridiculous, wonderful Golden Girls musical story. Once he had it all mapped out, Andy and I took our turns editing and tweaking, and then we all have edited and tweaked throughout the rehearsal process. Mason is our Golden Girls guru, so he is always available when we need to reference the source material.

The Golden Girls popularity and longevity are impressive. Every June here in Pittsburgh, there is a benefit reading of a Golden Girls script and it sells out within what seems like minutes – I’ve never been fast enough to get tickets. Why is the LGBTQ community so devoted to these characters? Like queer people, ladies of a certain age, especially in the 80’s, were not ALLOWED to be sexy and outspoken and the leads in a story, they were the guest stars, the bit parts. And the Golden Girls said, f that! We can flirt and date and just BE, and that’s why I think queer people can identify. 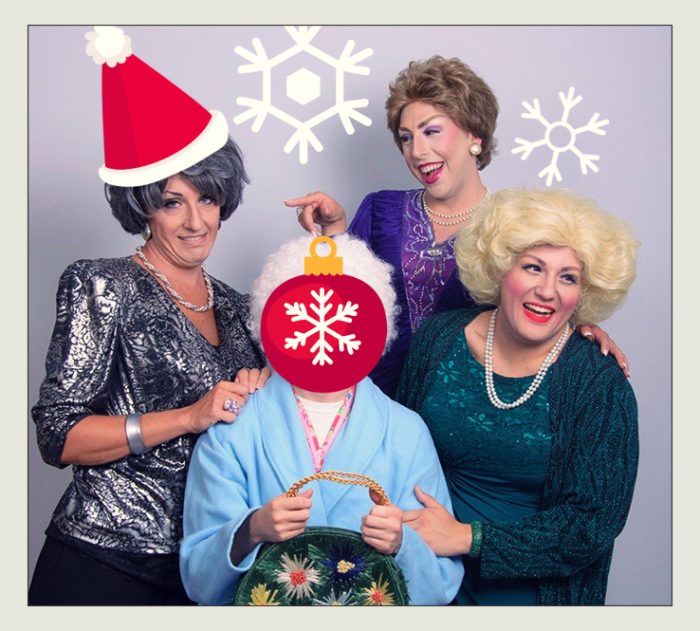 Where did the Token Sophia concept come from? Any idea how many Token Sophia’s you’ve dubbed? The first time we all got together, as a sort of flashmob at The Rue La Rue Cafe, we had a Sophia lined up, someone that Gerry and I had worked with before, but she was unable to make it, so I told Gerry to make a Sophia puppet. For that first outing, she was a puppet. For the next outing, we were going to Dragcon, and came up with the idea to make each person who wants to take a pic with us the Sophia. So we bought a white wig, brought an old lady purse and big glasses, and voila. There are probably 50 pics out there in the webiverse of people as our first #TokenSophias. So when it came time to write our own show, we built that concept into the shows. A few #TokenSophias join us during the show, and then after the show, they can do a meet and greet with us and get dressed up. We also can dress you up as a #TokenStan if that’s more your bag. I’d say we’ve had hundreds! At DragCon alone!

Describe some of your merchandise. Can we do our holiday shopping at your show? We have “Golden Gay” t-shirts and tanks. We have magnets, coasters, and bookmarks too. We also partner with Sassy Green Lady, who has Golden Girls inspired merchandise on her etsy shop.

$35 VIP #TokenSophia tickets (includes Golden Girls keepsake bundle and a pic of YOU with all three girls as our #TokenSophia, we provide the wig, glasses and handbag, you provide the Sicilian attitude)