In March 1949, the Pittsburgh Post-Gazette ran a multi-part series exploring ‘sex crimes’ and the people who commit them. This series was tied to the establishment of a Pittsburgh Morals Squad and the introduction of new legislation to respond to sex crimes. And the series was notably published a year after the Kinsey 1948 report on human sexuality.

For a more detailed analysis of the Morals Squad and their impact on the local community, visit the Pittsburgh Queer History project. As we move forward, it is critical that we understand where we came from. Most of us were not alive in 1949, but our parents and grandparents were. Our City and many of our cultural institutions were in place. These attitudes are not unfamiliar to us – most fundamentally, the (unfair) tie between sexual orientation and sexual crimes.  It is also documentation that law enforcement targeting LGBTQ people didn’t start in 1969. Or 2008. 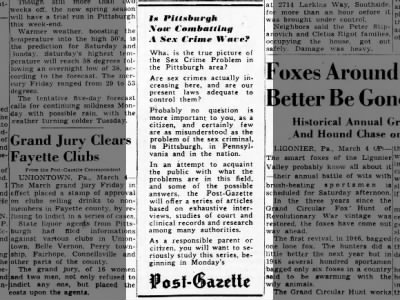