A new play is debuting at the City Theatre this month, Nomad Motel written by Carla Ching.  This show also marks the debut of a ‘pay what you want’ option at City Theatre during select performances. Details at the end of this post.

In the not-so-sunny side of California, Alix bounces between motel rooms, taking care of her twin brothers for her mostly MIA mother. Her classmate Mason is a budding songwriter trying to keep off the radar of his absent father’s Hong Kong mafia friends. Together, they must learn to scrape by without giving up their dreams. This world premiere is a coming-of-age tale about making something out of nothing in the land of plenty.

I was intrigued by the premise of how children navigate housing insecurity because their experiences are not often in the forefront of regional conversations around affordable housing. We don’t talk about ‘motel kids’ in our region, but they are here. And I had never heard of the ‘parachute kid’ concept until now, but those young adults are here, too. After I read a few interviews with Carla, I had to talk with her.

So I asked Carla a few questions about her play and herself. She was gracious enough to make time to respond even as she’s finalizing the performance. 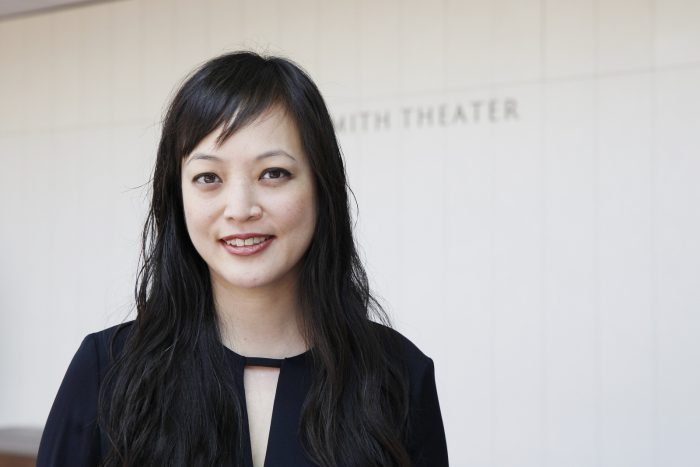 How do you describe your identity: An Asian American Californian/New Yorker whose parents were born/raised in Hawaii

Your Affiliation with Nomad Motel: I wrote this thing.

Please tell us about your very first impression of Pittsburgh:  I’m lucky in that I have a few friends who live, work, make art and raise families here (in Homestead and Shadyside), so I’ve gotten to experience more than just the South Side.I also made a field trip to Falling Water with some of the cast and our director. What’s struck me is the incredible history of industry in this city, and the diversity of neighborhoods that exists. The richness of the arts community and history of art here. I also was lucky enough to see a show here three years ago — Oblivion by Carly Mensch — and I was so impressed by the intelligence and thoughtfulness of audience members. And the Mattress Factory is the single best and most memorable museum I’ve ever seen.

The other thing we need to address as a nation is how we help young people who have a shattered or unhealthy home situation. Where do we lend support? How do we help them find a new home, traditional or not.

Your newest play Nomad Motel debuts to the world from Pittsburgh’s City Theatre. What is going through your head as Opening Night draws closer?  It’s a really special thing to be able to get this play on its feet and off the ground after working on it for over four years, with half of this cast and with Bart. To get the chance to bring it to stage and share it with Pittsburgh audiences is so exciting. We have a remarkable cast, crew, director dramaturg, assistant director and producing team, so I know we’re all giving this our whole hearts. And I truly believe the sum is greater than the parts. As we refine things (we started tech today), everyone’s voices in problem-solving are really awesome to hear. It’s the only team sport I’ve ever enjoyed playing.

Pittsburgh is wrestling with affordable housing conversations around everything from a potential Amazon HQ to developer credits and more as entire neighborhoods are transformed by housing displacements. We do talk quite a bit about homeless youth, but I’m not sure we are having robust conversations around kids and their families living in our motels. Do the themes in the play set in a more affluent city apply to this midwestern/Appalachian city? One of the reasons I tackled this play was because I was astounded at the incredible class disparity in Orange County, a community that is often thought to be only wealthy. Our amazing dramaturg/Director of New Play Development Clare Drobot pulled the statistic that while in the 2016 Census, the median household income was just over $78,000, 27% of the county’s children are living in poverty. So while there are many in Orange County who have a lot, there are many who do not. And as testified to in the HBO documentary, The Motel Kids of Orange County, many families get stuck in a cycle of living in week-to-week housing situations because getting the capital together to put a downpayment/first month rent down on an apartment can seem insurmountable. I hope that this play and these characters invite conversations in many cities about housing affordability and what support non-profits, city, state and federal institutions can lend so that families like Alix and Fiona’s.

In my early years as a teacher, I student-taught at the Harvey Milk School in NYC which served LGBTQ youth who had to leave their assigned schools often because of bullying situations. And often, they’d had to leave home because their families didn’t approve of their identification. Something I noted there was that when the traditional family falls away, young people often built a new family unit. Often of friends, sometimes foster parents, a girlfriend or boyfriend. But a lot of my students had to leave home early. The other thing we need to address as a nation is how we help young people who have a shattered or unhealthy home situation. Where do we lend support? How do we help them find a new home, traditional or not.

Donate to support Q&A’s like this one that you can only find on our blog!

When you bring Motel Kids and Parachute Kids into the same story, it is easy to see “scrappy survivor with heart of gold” and “lonely rich kid” tropes versus the fully fleshed realities of children actually living in our communities. How did you sidestep stereotypes while writing this play? I read and watched a bunch, but most importantly, talked to people who have been both motel kids and parachute kids and worked with housing unstable families and satellite families. This is not documentary theater by any means. But, I ingested what I heard and then tried to write each character truthfully and let them speak to me, as kooky-writerly as that sounds. I let them dictate action. Let them tell me who they are.

How does intersectionality inform your work? As a woman of color writer, it’s something I think a lot about and continue to reflect on and attempt to let inform my work. While working on a television show, we had a workshop on intersectionality in theory and practice and what was remarkable is how even the best intentioned people don’t always see when they are looking at class but not race or race and not gender. Or that these systems are all bound up together. It makes me crazy. But I know I also have my blind spots and limitations. So I try to work with other people who are smart and thoughtful and who will bring things up that I miss so we can create something together that is responsible, thoughtful, human.

What Pittsburgh creators – writers, musicians, poets, etc – have influenced your work? Is there anyone with whom you’d like to collaborate? August Wilson is a personal hero of mine — how he’s portrayed the African American community in Pittsburgh for a century is a staggering accomplishment. And he did so with poetry and humor and having written some of the best characters of our time. He has inspired me to tell the story of people I know who may not have made it to stage yet. Write Asian American characters that aren’t the stock characters you’ve seen before — the goofy neighbor, the nerdy scientist, the tech guy. But who have layers, regrets, pasts, hopes and enormous dreams for the future.

Please tell us about the first LGBTQ person that you knew and what impact they had on your life. My godfather, Uncle Jann was a ray of light. He handmade me birthday cards, took me on excursions all over Honolulu (where he and my extended family live) and was one of the first adults to take an active interest in me and consider me as a person, not just a child.

What’s one simple thing the readers of this blog can do to support children and young adults struggling with housing security and the other challenges you explore in Nomad Motel?  I am new to town, but upon some brief investigation:I understand Proud Haven provides incredible resources for LGBTQIA+ homeless and housing unstable youth. They have year-round supply drives.

The Homeless Children’s Education Fund also has some wonderful programs that range from after school programs for younger children to teen outreach. They are looking for mentors, and outreach folk but also have drives for supplies.

You can find Carla online:

Get your tickets here!

Note: All services may not be available at all performances. Click the link above for accessible performance schedule or contact customer service for further assistance.

May 12 through June 3, 2018
Running Time: Approximately 2 hours including intermission.

Appropriate Ages: This production is contains mature language and content. It is reccommended for teens and up.

Pay-What-You-Want Previews: May 12 – 17, 2018. Tell us what you want to pay during our five preview performance. Purchase online or through the Box Office.