Random review of #fishburgh adventures during Lent. Find a fish fry on this map! You can also follow them on Facebook and find tons of reviews and suggestions.There’s a winner!

For this final regular Friday Fish Fry in Lent, we decided to heed the input of readers of The Incline and head out to the number 2 ranked fry, Our Lady of Grace in Scott. We figured number 1 would be over the top busy, plus we like the church fries. 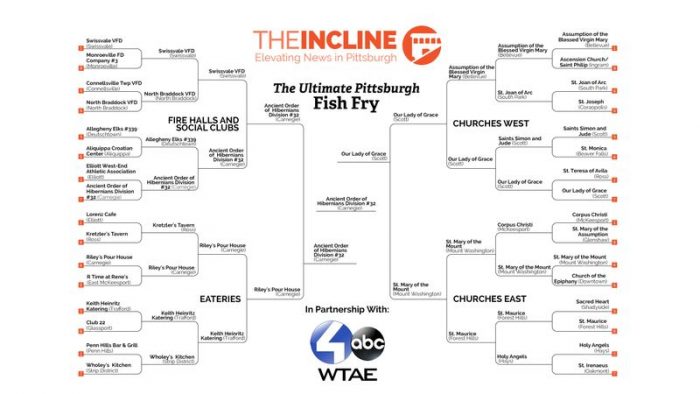 So after spending 8377 minutes trying to cross the West End Bridge, we picked up Banksville Road and wound our way through the back roads of the South Hills toward Scott Township. Traffic was surprisingly moderate (after the bridge.)

We arrived and saw an ominous line out of the door. So I jumped out of the car and Ledcat went to park. I joined the throng and was immediately transported back to every crowded Catholic event I’ve ever attended. There was no signage separating the ‘to-go’ folks from the ‘eat-in’ folks, there were no volunteers directing traffic, and there was a palpable fear of the fry running out of fish.

What was really interesting was how many people were aware & slightly resentful of The Incline’s fish fry contest because it brought outsiders to the fry. It is sad that they didn’t see that bringing new people to your faith community is what you are supposed to do. I tried to lighten the anxiety by making jokes about running out of ‘fishes and loaves.’ Ironically, they ran out of fried fish and bread by the time we got to the ordering station – so ha!

I get the fear of disappointment, but I also noticed numerous signs around the venue asking people to volunteer for the fish fries. So I was prepared to accept whatever would come my way.

The menu was pretty wide ranging – the usual fish sandwich/baked fish meals, shrimp and crab cakes, three kinds of soup, pizza and the typical sides of pierogies, macaroni & cheese, haluski, etc. I’ll admit I was dismayed that they ran out of cole slaw.

I was unhappy about the dinners having mandatory potato/french fry options. I think allowing for mac & cheese and/or pierogies as a starch would be better. I also thought the prices were too high – I spent $34 when I typically spend $25 or less.

So, we originally ordered a crab cake meal for Ledcat which included a choice of potato, and a side of , green beans or applesauce. It also included a free beverage and a choice of dessert. To sample our typical sides, I had to order ala carte. I picked fried shrimp, a bowl of fish chowder. I also ordered macaroni & cheese and pierogies. They threw in a beverage for the wait.

Then we hit the next traffic jam and the weakest point of the entire venture – the food distribution area. All of the to-go orders and the eat-in orders required us to go through the cafeteria serving line. It was utter chaos, in part due to the volunteers being exhausted and tired of explaining that they would have no fish today. It took more than 20 minutes to get through this bottleneck and it brought out the worst in humanity.

The lowest point for me was when a woman who belonged to the church who had cut in line to join her friends picked up a bowl of applesauce to inspect it and then put it back down. That was beyond gross. Boo to you, rude lady.

By the time we arrived to the actual food, they were down to one crab cake (more were in the over, but would be 20 minutes) and Laura had ordered a dinner of two crab cakes. I spoke up and asked if they would offer her something else in lieu of the second crab cake. She ended up with baked fish and a load of shrimp.

We stumbled out to the next station. I just wanted to sit down for a minute and get oriented, not stop to find tableware and such. We found two spots and scattered to get drinks, etc. But not before a priest offered us a small glass of white wine he was carrying around in a plastic water pitcher. We declined and he seemed surprised.

Everything was styrofoam. Everything was disposable (except the wine watcher pitcher?) and there not a hint of recycling efforts anywhere, not that there was much to recycle.

The food was good, but not great. The menu was pretty extensive which is a good thing.

My shimp were butterflied and huge. They were perfectly tasty, but nothing extraordinary. The macaroni & cheese was the closest approximation to kraft mac & cheese that we’ve found so far, but that’s still just middle of the road. The pierogies were not homemade, but were prepared by the volunteers on site. They were tasty with lots of onions and butter. 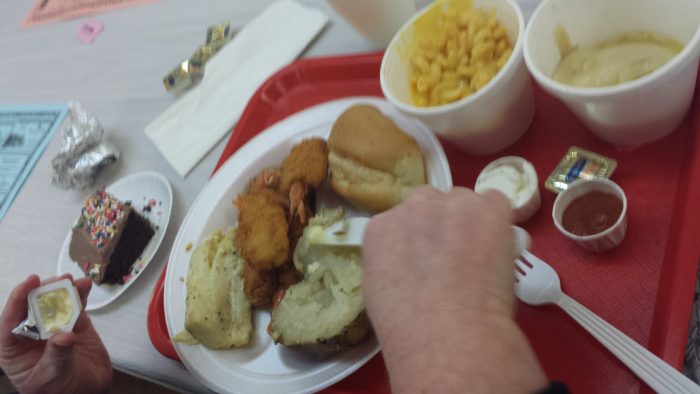 Our drink choices were iced tea, lemonade, and water. I do not know why every fish fry has such blah lemonade, but it is pretty consistent. Is there a universal church lemonade powder that is lackluster by design? But it wasn’t awful and I was definitely thirsty. And wine in a plastic pitcher is just a little too mommy-wine-culture for me.

The only disappointment was the chowder. They swore it was clam chowder, but it was watery fish chowder. Blah. I would not have chosen that, had I known.

Dessert was chocolate cake with that sort of iced frosting that you remember from school days. It was fine.

Overall, the quality of the food was perfectly fine. Granted, we didn’t try the award winning fish, but I don’t think we would drive all of the way back to Scott for another dinner.

By the time we sat down, clean-up had already begun in the dining hall so I have to take that info consideration. The tables were set with large paper placemats, 2 versions with assorted ads and 1 that was a generic fish fry promotion. There was no attempt to engage us or educate us about the faith community or other upcoming events. 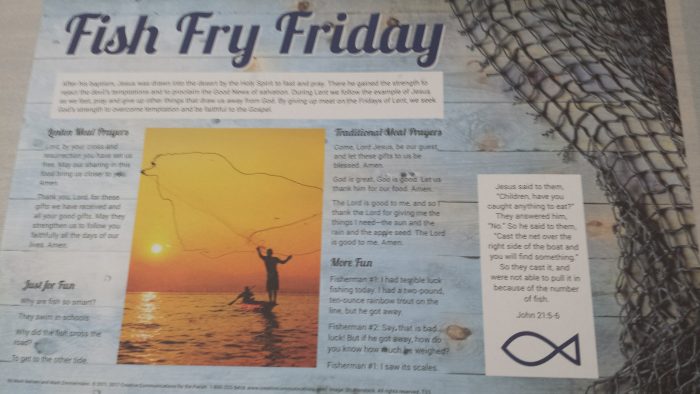 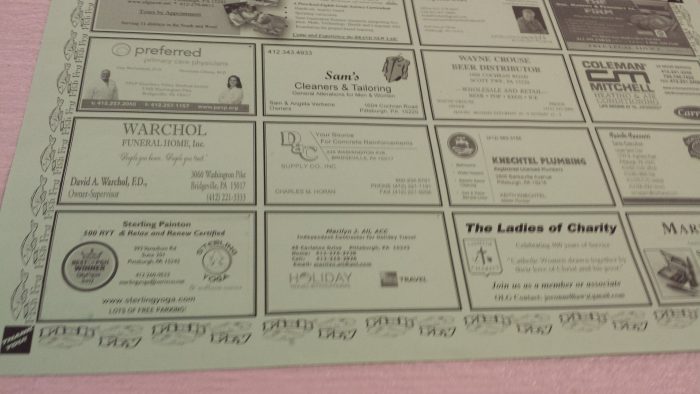 The volunteers were pleasant especially under such harried circumstances. And they did a good job of trying to accommodate the fluctuating menu availability. But their setup could use some help.

Essentially, we all came into a crowded foyer and the to-go folks are supposed to move directly ahead to the dining area to place order or pick-up their orders, while the eat-in folks wind around the foyer single file so we can end up at the cafeteria entrance.

My suggestion is that they reconfigure. Have the eat-in people go into the hall, place an order, and be seated. Use runners to bring the orders out to people or at least out of the kitchen so we can walk up and claim our food. Put the to-go folks near the cafeteria line entrance and hand out bags from that vantage. This would greatly reduce congestion and angst. Get folks seated. However, this will require more actual volunteers even though that will translate into less work per person and much less frustration. Keep us away from the cooking prep area altogether.

They also need more signage to explain the flow, whatever that might be. Put a volunteer into the foyer with the angsty crowd and use cell phone texts to keep that person apprised of food shortages.

And rally your peeps. Most of the complaining and griping was coming from members of the parish – boo to them. You just gained this huge boost in visibility thanks to the people who promoted the fish fry competition; don’t waste that or wish it away. You should be thanking people who drove all the way to Scott to support your fundraiser, not begrudging us a fish sandwich.

The impact of the second place finish in The Incline was fairly obvious. That’s why we went there. Several other people in line were also referred by that win. I also asked the volunteers. They told me that a lot of folks had mentioned that as the reason they came, including one person who drove from McKeesport!! Another woman had gone to three other fish fries between 4 and 6 that had also run out of fish, so then she came to Our Lady of Grace. She left after the fish announcement and said she was going to a nearby social club that never ran out.  I read on Facebook that the #1 spot in The Incline vote had run out of fish by 5:30 PM. Unsure if that’s true, but I think The Incline should do more stories on the mechanics of fish fries, including the storage capacity.

The volunteers also told me that they could store 350 lbs of frozen fish so that’s what they could serve. They do not have the capacity to serve more than that. You can learn a lot when you ask questions versus standing in line griping. (This really got on my nerves.)

We typically wrap up the fish fry season at the ELKS on the Northside because they are open on Good Friday. And then we’ll do a 2018 sumary post.

If you appreciate/enjoy these fish fry reviews, please consider a donation to keep our work moving forward.

I did have to laugh when I saw this in the bathroom. Someone had been very committed to turning out the vote.