Yes, I was an intern in then-Congressman Rick Santorum’s DC offices for six months during 1991. Me. Most of you know this. Some of you don’t.

This internship and the photo it generated are perhaps one of the most enduring legacies of this blog. 27 years after the fact, it is still a salient and timely part of my blogging identity, thanks to the seeemingly endless capacity for Santorum to stick his foot in his mouth on CNN or wherever he happens to land as a consultant/advisor/correspondent/well-paid-mouth.

Here’s the pic (scroll down to read more) 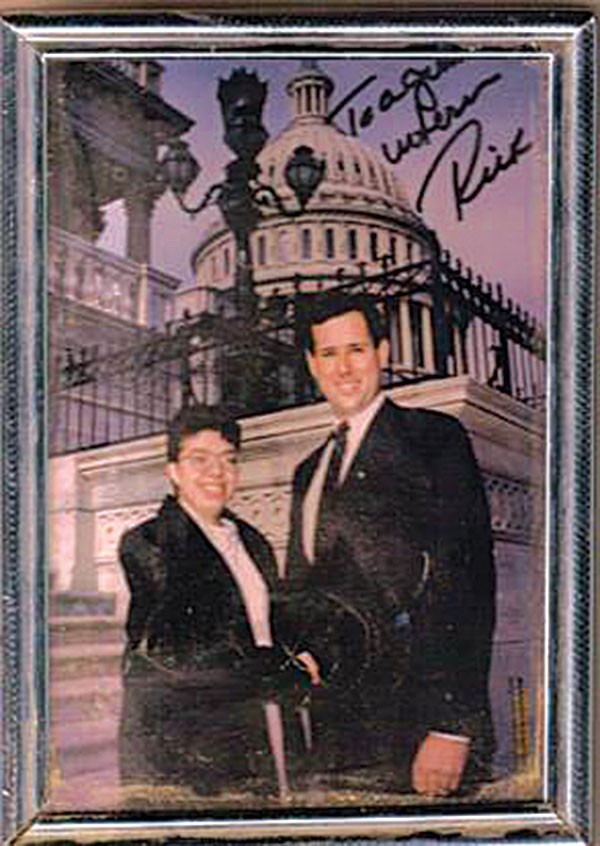 How did this happen? I was a college junior at my suburban DC university and heard about the James G Fulton Fellows Program operated by the Pittsburgh Foundation. It was a chance to complete a legislative intership with a stipend. Because I had a summer residential job at my college, Marymount University, it was a great fit. I think back then it was an 8 week, maybe 10 week program?

How did Santorum happen? As I remember it, we were assigned to legislators without impunity. I have this memory that I was originally assigned to Senator John Heinz, but this was the spring that he died. So the rest of the Pennsylvania delegation divied up his interns, etc. I’m not absolutely sure that’s what happened, but somehow I ended up assigned to the newly minted Congressman from my home district.

What was he like? He was pretty likeable. He treated the interns collectively and individually with respect and attentiveness. He made sure we were invited to lots of activities and things like a lecture by Newt Gingrich and lots of events that had food because he knew most of us were living on that stipend. I was not, I earned my 3 meals via my summer job at the college, but it was very nice of him. He invited us to his home, introduced to his children, knew our names. Compared to my friends in other offices, he was pretty professional and engaging.

Did you spend much time with him? At one point, I became a designated driver to take him to and from the airport simply because I could drive a stick. So I spent a bit of one-on-one time with him in that capacity. He asked me about my family, school, life in West Mifflin, etc. So it was personal, but still pretty professional conversation. He also invited all of us to his home and sponsored a cookout of some type for us toward the end of the summer.

How was the office environment? Now, that’s where things were uncomfortable. As a general rule, the folks were nice and helpful. But this subsect were absolute conservative zealots on fiscal matters. And abortion. Another intern and I described it as “the cult of the unborn fetus” because it was so creepy – and keep in mind, I was attending a Catholic university. I would have described myself as pro-life at that point, but this experience was signficant in changing my mind. But other than that, it was your typical office. Overly eager folks. Folks with umpteen degrees. Big smiles. Office romances and office crushes. That guy who never remembered anyone’s name.

Did you gain anything from this experience? Absolutely. I fulfilled my internship requirement, I confirmed that I did not under any circumstances want to work on Capitol Hill. I learned a lot about the legislative process and I witnessed firsthand how ambitious young white men and ambitious young white women with the same education had radically different experiences circa 1991.

Also, my internship is relevant to my everyday (unpaid) work 27 years after the fact. Most people can’t say that.

Do you stay in touch with anyone from that time? Not really. I am FB friends with a few folks, but I don’t *know* them. I saw Santorum at an event in 2000. He recognized me which impressed me. But we just spoke banalities for a few moments and that was it. Of course, that was long before I was blogging.

What do you think about him now? I loathe the man he’s become and the things he espouses to promote his agenda. I’m not foolish enough to think my experiences with him 27 years ago were some sort of deeper insight into his life. But once you know someone on a personal level, it is hard to hate them. It is not so much complicated as nuanced. I absolutely want him out of public life and sent off to some conservative think tank to become irrelevant for the rest of time.

What would you like to see happen now as a result of this internship from 27 years ago? Well, CNN is probably not calling anytime soon. But I’d love to see The Pittsburgh Foundation host a reunion/gathering for the alumni from the James G. Fulton Fellows. That’s over 50 years of people who had political internships. Wouldn’t that be a fascinating gathering? I asked the Foundation about this a few years ago, but they weren’t interested and said that they didn’t have a database of alumni. File that under #MissedOpportunity Althought something tells me the more affluent and successful of us are on a list somewhere.

I also think it would make for an interesting media piece to explore how these types of internships have panned out, especially as the conversation around political dynasties intensifies. Dynasties aren’t just blood; they are very much tied to non-familial relationships and loyalty (see Central Catholic and half the white men in the region over the average paygrade.) Someone tip off Chris Potter WESA 90.5, okay?

Would you do it again? Of course. It was a useful exerience for me.

So you spent six months interning with Rick Santorum and that put you on the path to become a pro-choice, feminist? Yep.

Support independent blogging and former Santorum interns by investing in our blog.