One thing I did not anticipate well was my post-surgical clothing. I assumed I would wear pajamas and sweats for weeks. I almost bought a few extra pairs of sweatpants, but I’m glad that didn’t work out.

There’s this post-surgical condition that the HysterSisters call swelly belly.

First of all, the term “swelly belly” (Latin term: Swellibellicus) is a HysterSisters word that refers to post-op swelling of the abdomen. It can occur in any type of hysterectomy procedure, but seems to be more prevalent in abdominal surgeries.

Swelly belly is caused by trauma to the abdominal tissues, gasses used during surgery, and/or fluids collecting in the tissues due to trauma during surgery.

If you’ve ever sprained your ankle or been stung by a bee, you’ve probably had some swelling at the injured site—the same principles apply for swelly belly.

Swelly belly is NOT fat, or weak muscles (though they may contribute), or last nights lasagna collecting around your mid-section (though that can also contribute).

Swelly belly seems to make an appearance soon after surgery in most ladies (though not always all) and may hang around for several weeks or even months. It is worsened by too much activity, lifting things that are too heavy, being on your feet too long, stuffing yourself in jeans that are too tight, and just generally overdoing it. It also seems to be worse in the evenings, after a long day of overdoing it.

Apparently, I wasn’t paying much attention to this prior to my surgery, or at least the advice on what to wear. Being skinnier, losing weight or having a flatter abdomen was not even on my radar around this surgery.

When I arrived home the day after my surgery, I jumped into pajamas and bed. The next morning, I decided to pull on a pair of my loose and comfy sweatpants only to discover that the waistband was far too tight. They fit everywhere fine except my waist. I ended up wearing a really old ratty pair that I had originally consigned to the textile recycling donation bin.

This continued for days and weeks. I was essentially able to wear 3 pairs of pants that were stretched enough to push the waist band underneath my abdomen. The swelling was one issue, but the incisions were a factor as well. I have four, two near my waistline.

I found an old pair of corduroys that were two sizes too big for me and could slip into those as well, but they weren’t quite as comfortable because of the snap and zipper.

What’s interesting here is that I also learned from lab results that my uterus with fibroids and cysts had been approximately the size of a six month pregnancy. It is not an exact comparison because the uterus was not growing as it would with a fetus but a rough approximation of how distorted it had become thanks to the growing parasites of the fibroids.

So there’s this gaping hole inside my abdomen that will eventually sort itself out as the bladder and rectum move into new positions and the inflammation reduces and leaves me with my post-hysterectory abs. So technically I should have a smaller waist – someday.

But there’s no way to tell what this will mean for how my clothing will fit in 4-6 months.

On the bright side, it means I have a legit reason not to buy any new clothing until June. On the not so great side, I still can only wear 1 pair of my jeans and that 1 pair of corduroys plus sweats. But the tightwaisted sweats that I used to love are still not great. I wore a pair yesterday to my therapy appointment and today I feel the discomfort.

When I’ve had this conversation with people, they tend to start offering suggestions – try leggings, try dresses, try yoga pants, etc. And my response is that I don’t need this to be fixed. I have leggings, dresses, and yoga pants on board for when I can wear them. What I need is to feel okay with the waiting, to acknowledge the frustration, and figure out how to manage my anxiety. Not spent money on clothing that may or may not fit me in a few weeks.

Now fortunately, I work here at home so I can wear pajamas to my heart’s content. My partner is handling laundry for now and is very good about making sure my few items of clothing are washed regularly. And I have that one pair of jeans that I can make work in most situations.

My other fallback is announcing that I’ve had surgery. We had dinner at Monte Cello’s over the weekend – my first adult restaurant since before the surgery – and I had to wear sweats. I made sure I told the hostesses, the server and anyone who would listen that I was recovering from surgery. I’m sure they could care less what I was wearing or why, but everyone was very gracious.

So if you want me at your fundraiser, speaking at your event, or hanging with your donors, this is what you will get.

Now that I think of it, I’ve always found middle-aged lady leisure wear appealing, if pricey. I could do with some Sue Sylvester items or the attire from Frank and Gracie when they were forced into a retirement community. Hmmmm … 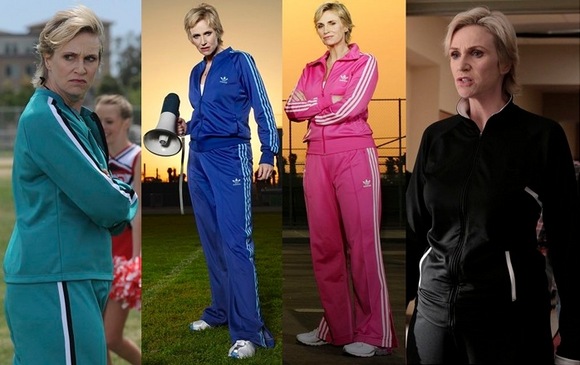 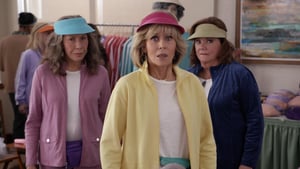 Thank goodness I was too lazy to get those items to Goodwill!