October is LGBT History Month. I’ve asked several people to share their thoughts on regional historical events that left an impression on them. Some contributors are LGBTQ, some are allies. All are people I think you will enjoy hearing from this month. If you would like to submit a guest post, please click here.

Bloomers and it’s predecessor Wild Sisters are legendary in the local queer women’s communities. I myself came out long after their doors closed, but Ledcat had been there. You can read a Post-Gazette piece about Wild Sisters as well as a 1985 mention by the PG editor.

I found a few other excerpts

After that it was taken over by a women’s collective called Wild Sisters. I think it was a dozen women, which I think towards the end ended up being mostly a lesbian group. It became Bloomers in the second half of its incarnation…It became a sort of a site for the social life on the left….It was a place that you could do stuff on the left so that South Side somehow got linked into the life of the left, which often circulates around Oakland and the universities.
— Steffi D.

To honor the contribution these spaces gave to our entire community, I asked Cindy Shaffer to share some of her memories. ~ Sue

The year was 1990, I had just came out of a secret 8 year relationship with a woman I had met at work. Everything was secret back then, it was the unspoken, don’t ask, don’t tell, long before the Clinton administration ever made it an official policy in 1994.

With that relationship over, the question became, where would I safely go to meet women, women like me. I only knew one other lesbian, so I asked her, and she told me about some places, the places that were a little safer to go, but mostly men, not what I was looking for.

Then she told me about Bloomers, a women’s space, not just a bar, on the South Side. I remember my first time going there, it was off the main street, with it’s own little parking lot, and a back entrance, so you didn’t feel like everyone could see you going in, just in case, well,  you know.

Once I got inside, I was delighted to see it looked like any other place, with a restaurant and bar and dance floor. BUT IT WAS ALL WOMEN!  I felt safe.

The more you looked around, you saw the women’s art work on the wall, some were for sale. There were shelves on the wall that had information that you would have never have found out in main stream america.  There were support groups, and benefits, and open mic night, so many different types of things to participate in, it was like being gay was normal, but only in this one building. You would never walk out of that building, holding hands with someone, or walk out alone after dark.  If you didn’t live it, some don’t believe it.

We have come along way since then, now you see men and women, holding hands, walking the  main streets of South Side, but we should never forget the work that was done by those that got us to this point.  Don’t take it for granted.  People lost friends and family and lives, getting us to where we are today. There is still work to be done, but let us also celebrate the progress we have made, and for me, Bloomers was a very huge part of breaking the barriers to just be me. 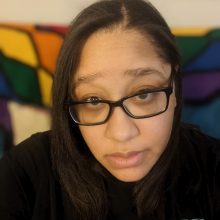