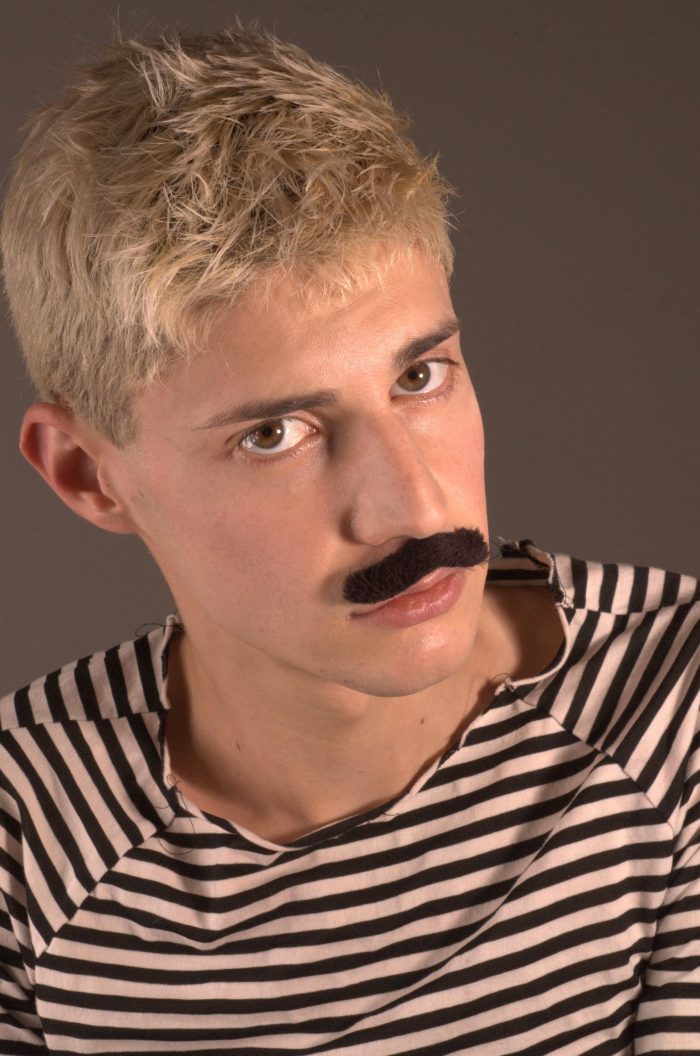 How do you describe your identity? Gay, Mexican-American Comedian and Writer, and drag queen

Please describe your coming out experience. Where did you find support? What challenges did you face? I came out when I was 15 to my parents. I don’t know why I did, but it felt like the most pressing thing in my life that I was not being honest about. When I did come out, my parents were devastated, I was devastated. A day later, my father, who was part of the NRA and an avid hunter, came to me and told me that he loved me no matter who I was and that he just wanted me to be happy–also, that Boy George was his favorite singer in high school, and he had to keep that a secret. A couple of years later, when I was living in LA, and had to tell my father that he wouldn’t need to send me freshly hunted and butchered bear and deer steaks, because I was now a vegetarian, he responded: “Son, being gay is OK, but if you’re going to be a vegetarian, I’m going to have to disown you.” Hehe, you gotta hand it to my father for having so much trust in the integrity of our relationship that he knows he can still poke fun at me because when it mattered, he gave me the love and support I needed to be strong.

How would you describe yourself NOW in terms of “being out”? I am happily in love with my boyfriend. I realize that being a successful person and accomplishing the things you will want to in life will require so much more strength and determination that who you are attracted to has so little to do with what it means to be a successful and happy person. you should really focus on your passions and find your skills and trust that love will come to you, and when it does, you’ll realize you’ll have a lot more to work on there as well as every other aspect of your life. That’s what’s so hard about being an adult.

Tell me about the first LGBTQ person whom you met. What impact did they have on your life? Sadly, I think that the first LGBTQ persons that I met were probably very quiet about who they were. Their identities were shrouded with mystery to me as a child, and treated as if a perverse aspect of their personality, the way we would not talk about my aunt’s alcohol problem even though she passed out in the mashed potatoes during Thanksgiving and made my abuela cry. There was a great-uncle that had “roommate,” and they were bachelors, but they had adopted a niece and raised her as their own daughter and had pictures on the walls. This was not uncommon in Madera where I grew up, where the community was so conservative about talking about sexuality out loud, but in quiet, they accepted each other. That quiet, unspoken acceptance was something I never grew accustomed to, having an aunt who moved to New York City in the 1970s who works at the Schubert Theatre and was friends with many gay men and women, and never minced words about her love and support for them. I learned early on that silence was equal to shame, and shame was something I wanted so hard to get past in my life that I always wore my sexuality as a inconsequential aspect of myself akin to my hair color and height, especially considering that I was not having sex until my twenties anyway, so it really didn’t matter.

Past or present, favorite LGBTQ character or creator in television, film or literature? Please tell us why. Todd Solondz. His films are an example of the kind of satire that I love, taken to a dark and brilliantly uncomfortable place. I would love to be able to write one script as brilliant as Happiness. I of course can’t help but mention John Waters brilliant showmanship and love of underground cinema, Pedro Almodovar’s cinematic virtuosity, Fassbinder’s prolific brilliance, and Pasolini’s erudition.

How do you stay informed about LGBTQ issues? I like to attach a string betwixt two Dixie cups and place one at my ear and the other at a glory hole located at Club Pittsburgh. Sounds like there are lots of…uh…issues issuing there…

Describe your geographical community. I live in Oakland, which is very LGBTQ friendly. Coming from San Francisco in 2013, I thought that Pittsburgh would be conservative and dangerous to me as a drag performer. But I discovered that the Midwestern polite attitudes resulted in people holding back their negative comments to say behind my back, which is exactly how I prefer it. That’s a sign of good parenting.

Have you ever experienced discrimination based on your identity? Specifically, in a job setting, when applying for housing or while in public. No, I really cannot say that I have. I have been very fortunate in that regard.

Tell us about your access to health care in Western PA. Has it been LGBTQ competent (or not?) When I first moved here, I joined the Pitt Men’s Health Studies so that I could participate in the initial PrEP studies that were occurring around the world. Subsequently, I discovered Dr. Stacy Lane, whose Central Outreach Wellness Clinic is a wonderful place that provides health advocacy to a community in need. It’s an example that I hope other mid-size cities throughout the country too far from metropolitan centers like LA, SF, and NYC can follow.

Are there issues impacting your LGBTQ neighbors that aren’t visible or part of the local dialogue? There needs to be a greater emphasis placed on real healing in this community. Hateful and petty attacks on each other are not OK. There is a real lack of support provided for many LGBTQ individuals of all ages that need to feel the awesome benefits of the newfound support and acceptance that is occurring throughout our society. Some have been left behind, and they need to be led back in with open arms and patience. Mental pains and substance abuse, habitual unemployment, financial losses and no way out in sight because of a lack of ideas or guidance is a real prevalent problem. There are some in this community that are highly successful that see those less fortunate as not their problem, and I think that might be part of the issue. Every individual is a potential for success, not a problem, and sometimes all they need is another shot and some help understanding how to move forward.

What would you like to see elected officials do to improve life for LGBTQ Pennsylvanians? I would like to see elected officials to help connect those who need it most–the uninsured LGBTQ individuals and drug users–to health providers of PrEP and mental health services. Start providing more accurate and updated health statistics for providers to utilize in their efforts as well.

Please share a lived experience, anecdote or fact about life as an LGBTQ person in your community. Holding a job is a very important part of being an adult, and even though you will no doubt have disagreements and disputes with your employers–some of them will seem egregious, you should never quit your job unless you have another job. It is nobody’s job to take care of you–not your roommate, your friend, your lover, your spouse, your family, etc. To not be victimized, you need to maintain your financial security. It’ll also make you better company when you go out with friends.

Beyond discrimination, what other barriers create challenges for your LGBTQ neighbors? A lack of savvy with systems and bueauracracy can really dissuade LGBTQ individuals from taking steps to ensure their well-being. Don’t be afraid to ask questions to those friends of yours that seem to have their shit figured out. Chances are they love to talk about how well their shit is figured out. As annoying as they are, take notes.

What LGBTQ friendly resources are available for your neighbors? Central Outreach Wellness Center, PERSAD, PATF, the Glitter Box Theater and the Blue Moon.

What is your greatest fear for the LGBTQ community in Western Pennsylvania? That they become less interested in LGBTQ culture and more interested in popular culture.

What is your greatest hope for the LGBTQ community in Western Pennsylvania? That we create a sustainable, informed and supportive artistic and invigorated well-integrated community.

What can allies do to support your LGBTQ community? Go to shows hosted and performed by your LGBTQ bars and friends. It’s support as the most powerful message: to create.

How can gay men and lesbians support the bisexual, transgender and queer members of our community? Tell each other when you see someone’s fly is down, or that toilet paper is stuck on their shoe. That can really kill your confidence.

What motivated you to take part in this project? I love Sue Kerr and her effort to promote queer voices in her community. It is supportive and creative. Brava!

Finally, what question should I have asked? Please also share your answer. Where do you see yourself in 10 years? Starring in “Saturday Night Live.”