He almost made it to two years.

It was a Wednesday afternoon when my friend Brandi posted on Facebook that her kids found an abandoned kitty in weak condition. They could not take it inside because of human allergies. Laura and I drove over with our cat carrier, thinking we would transpor to the Humane Society the following day.

We found a scrappy, sweet cat who purred in our arms. We put her in our second bedroom where she ate and ate. And ate.

She got a bath. She went to the vet who apprised her at age five and told us she might have cancerous tumors in her eyes. Uh oh – not a good prognosis. We decided to get her an appointment with the cat opthamologist and that we were keeping her. Cat eye doctor told us that her growths were not cancer and not tumors at all.

She bit us because she had been declawed. She slowly integrated into the home (except for Coco) and kept eating. And eating.

She was pretty fearless (except with Coco) adventuring around the house. She kept purring, kept eating. She went back to the vet for the fact that she ate like a horse and gained no weight.  That’s when we learn that our five year old female cat with potential eye cancer is actually approximately an 11 year old male with a thyroid disorder. We keep the name ‘Emberly June’ and start giving him meds.

Then we get the saddest news – he has a growth on his pancreas. It is cancer. It can’t be removed surgically. He has 1-3 months to live before the tumor shuts down his entire system.

That was November 2016. We set up a schedule of him visiting the vet for a check-up every two weeks for a penicillen shot to keep his system going with minimal invasion. He gained a few ounces, lost a few. He liked sitting on the scale for his exam instead of the exam table. He kept eating and not getting along with Coco. We had a whole routine of ‘cat rotation’ betwee the bathroom, bedroom and rest of the house.

He loved sitting in the windows, any window. He purred, meowed and tried to steal our food when we ate our human meals. He sometimes curled up next to us or across our bodies while we read in bed. He preferred cool spaces to warm ones because of the thyroid disorder, developing a fondness for sleeping next to  Laura’s closed laptop on the floor just adjacent to the AC vent.  Mid-spring, he developed an obsession for drinking from the faucet in the bathroom.

If felt like he was okay, but we both knew it wouldn’t last.

In early August 2017, ten months later, he’s ready to move along to whatever the next place is for cats.  He has that appointment at 7 pm this evening. Today’s he’s hanging out on his laptop eating every half hour or so. He still likes water, but it is clear he’s not comfortable likely because the tumor has grown aggressively. He doesn’t get up in the window. He doesn’t really want to be held.

Our vet told us that the only organ actually functioning is Emberly’s heart.

We’ve cried a lot this weekend, but there’s literally no hope for anything but peace for a sweet little kitty. We find some comfort knowing he has had a good home his final years with no lack of food, water, companionship, warmth or safety. We are contented with the decisions that we’ve made while he’s been with us, knowing that a peaceful ending is the best gift we can offer.

We’ll be distracted this week because the dogs of Laura’s brother are staying with us and they keep up hopping, thank goodness. We have four other cats and our own dog. Coco will not have to be locked into any spaces after tonight.

Emberly’s legacy to us is that do right by animals who need a soft place to land. I don’t know if and when another cat or dog in need will cross our path, but probably one will. We’ll move forward. 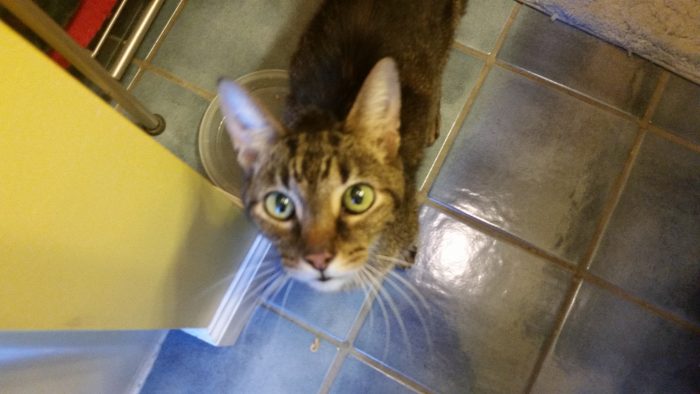 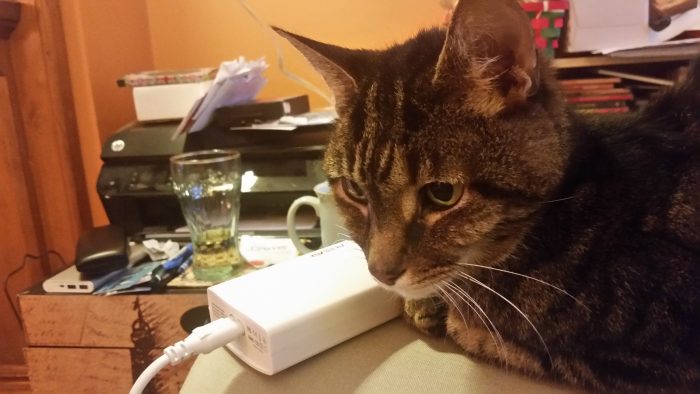 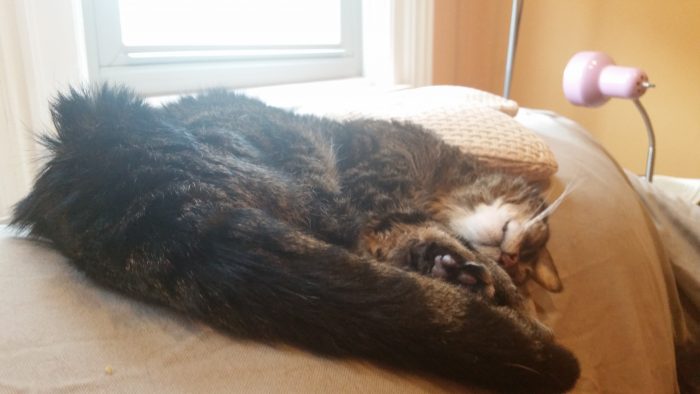 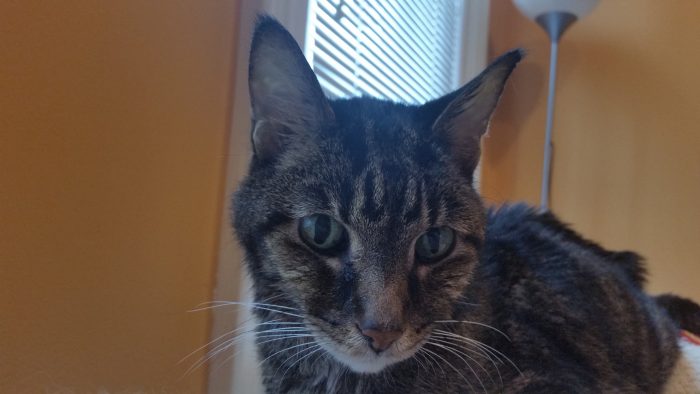 Help Find a Sick Cat on the Northside

Tour a 1900 Manchester Home the Night Before It Is Demolished