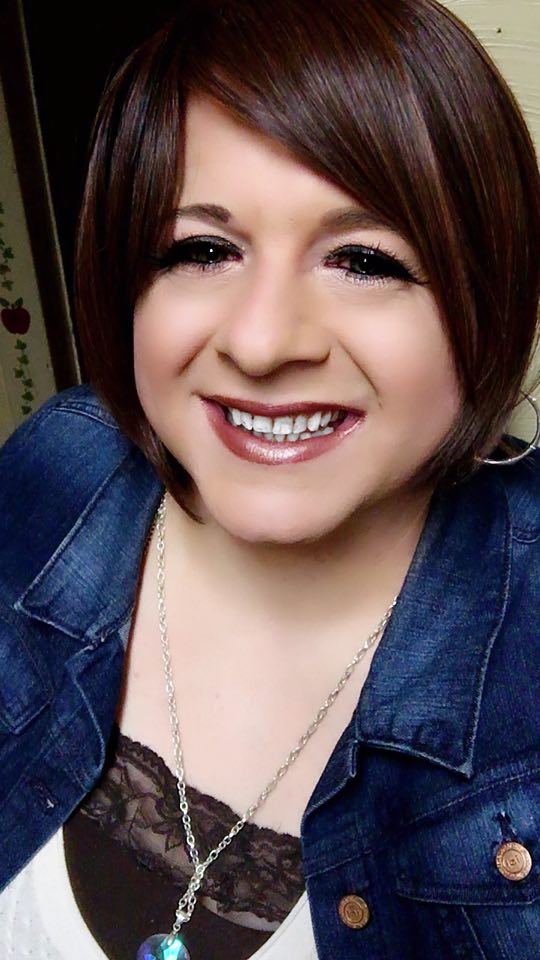 How do you describe your identity? I am bi-gendered, attracted to cisgender women. Meaning while I can live and be happy with being a male, I have a feminine side that needs to be expressed as well. I don’t consider it ” cross dressing” because I’ve always felt that term is akin to wearing a costume, or playing a part. Wearing make up and expressing my female side is a part of who I am. Not a costume.

Please describe your coming out experience. Where did you find support? What challenges did you face? I first told my best female friend about it. It was rather easy because she is an extremely accepting and open minded person.

This area as absolutely no support for LGBT folks, and since I don’t have transportation, I had to look for that online through various groups. I have met some great folks through that, however.

How would you describe yourself NOW in terms of “being out”?  This is tough. I am aware that more people know about me than I know of. I am semi open, but I still feel I need to keep my female side on the down low. I don’t openly discuss it, not out of shame of course, but I don’t go out of my way to hide it either.

Tell me about the first LGBTQ person whom you met. What impact did they have on your life? I’ve know many I the LGBTQ community, but my friend Emi was the first transgender person I befriended. She was so instrumental in supporting and guiding me through being trans. Most importantly, she was real, honest, and quite frankly, was something I needed. A kindred spirit that I could relate to.

Past or present, favorite LGBTQ character or creator in television, film or literature? Please tell us why. Jessica Who ? She was a YouTuber who was also doing stand up. I really learned a lot from her videos and it really made me realize that there are others just like me. That being transgender isn’t strictly relegated to those who are in transition. That the term was much broader than that. I learned a lot from her videos.

How do you stay informed about LGBTQ issues? Social media and various LGBT news sites.

Describe your geographical community. St Marys, although it is classified as a city, is a tight knit rural community. It is also very conservative and very Christian/Catholic. It’s an area where a lot of people know each other and that also leads to a large rumor mill/gossiping that comes with areas like this. There are those who support the LGBT community, but it seems outnumbered by the amount of Trump supporters, camouflage, and, pickup trucks.

Have you ever experienced discrimination based on your identity? Specifically, in a job setting, when applying for housing or while in public.   I know there are those at my workplace that know about me, but so far, I have not encountered any problems. I haven’t told my landlord I am trans and I don’t want to out of fear of being evicted from my home. My workplace has had two other trans women working there in the past. But it’s a rare commodity.

Tell us about your access to health care in Western PA. Has it been LGBTQ competent (or not?) This question I’m not real sure of. I have employer based care but never needed it in regards to my gender identity.

Are there issues impacting your LGBTQ neighbors that aren’t visible or part of the local dialogue? As I’ve said, this town is pretty conservative. I have had gay friends who were afraid to hold hands with their significant others out of fear of being harassed. I know a lot of LGBT residents here moved because they felt like they were not welcome here.

What would you like to see elected officials do to improve life for LGBTQ Pennsylvanians? Our elected officials need to end discrimination based on sexual orientation or gender identity. As I stands now, someone like me can get fired from their job or evicted from their home simply for being their authentic self. This needs to change.

Please share a lived experience, anecdote or fact about life as an LGBTQ person in your community. I may be still not completely out, but I’ve found that people were more supportive than I thought when they discovered it. It is rough in an area like this, but take it day by day and keep moving forward. As I get older, the need to be my true self increases. We only got one life to live, why not live the way one was meant to ?

Beyond discrimination, what other barriers create challenges for your LGBTQ neighbors? The fact that an area like this that is deeply rooted in religion and strict conservatism make it hard for people to come out. That and the rumors and gossiping.

What LGBTQ friendly resources are available for your neighbors? There is a Facebook group called LGBT Elk County that I encourage people to join!

What is your greatest fear for the LGBTQ community in Western Pennsylvania?  I fear that the current political climate, especially the transgender bathroom debate, is really firing up those who wish to do someone like me harm.

What is your greatest hope for the LGBTQ community in Western Pennsylvania? That more people in the community in rural areas, and those who are allies, step up and organize. Open support groups and meet ups to make friends and meet others. Feeling like you’re the only one is a terrible feeling.


What can allies do to support your LGBTQ community? Get involved, stand up for us, have support meetings,

How can gay men and lesbians support the bisexual, transgender and queer members of our community? Be understanding ! We’re all in this together!

What motivated you to take part in this project? After seeing a post on my county’s Democratic Facebook group, I figured, that while I have to keep some parts of my life on the quiet side, I won’t let it keep me from sharing my story in hopes it will encourage and help others.

Finally, what question should I have asked? Please also share your answer. What challenges are you experiencing living in your area ? Have you been harassed ?

So far, the only flak I have received were from former friends who thought they could use my personal life as a tool for revenge. Unfortunately, I fear for my safety a lot so I am afraid to travel around my area in makeup and female attire. Slowly I am stepping out more and trying to overcome my fear. I am trying to reach out to those like me but no luck so far. Although my friends who know accept and support me, it be nice to interact with others here so I don’t feel like the only trans person in this area.