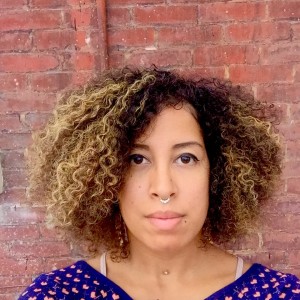 How do you describe your identity? Queer poc. I feel it encompasses the whole range of the “rainbow”, and doesn’t pin me into box. I used to identify as a lesbian, then felt like I had forsaken my whole identity when I developed real feelings for a man. I considered myself “bi” for a minute but that didn’t encompass my intense love for masculine people in high heels, or what I feel when wear drag. The poc because no matter where I go, race is always. an. issue.

Please describe your coming out experience. Where did you find support? What challenges did you face? I was fortunate enough to have found refuge at the GLCC in Pittsburgh when I was a teen, where there was lots of shared stories and encouragement for coming out. I don’t remember a whole lot, but national coming out day felt like the safest time to do it. My dad was super supportive, my best friend laughed at me cos she didn’t even think it was such a big deal. My friends from the GLCC were obviously supportive, but they couldn’t protect me from the endless torment that ensued at my high school. Rumors, being ostracized, threats, the whole gamut of bullying that left me feeling even more ashamed and suicidal than I had been before. It was around this time that I decided to stop even trying to be part of “that world” and just embraced my kooky nature, flaws and all, distancing myself from “conventional” society.

Tell me about the first LGBTQ person whom you met. What impact did they have on your life? There was a girl in my high school who was the first openly queer person I met. She put words to all the feelings I was having and showed me it was ok to embrace that identity… She also showed me that it was possible to overcome the destructive homophobia of the general sheltered public and to carve out my own little niche.

Past or present, favorite LGBTQ character or creator in television, film or literature? Please tell us why. I’m uncultured, sorry!


How do you stay informed about LGBTQ issues? Twitter and Facebook. The Internet is always ahead of the game, sharing the news before it reaches “news” status. Other than that, attending events around my city.

Describe your geographical community.  As an adopted teen I grew up in the suburbs which was not queer or poc friendly at all. I’m of the belief that all evolution occurs from social interaction. The hub of social interaction occurs in cities, and gradually leaks outward. The more geographically close I’ve lived to a city, the more evolved the community and the more work being done.

Describe your local or regional LGBTQ community. Pittsburgh is a great city for being queer. Local government works to represent and protect, there are many resources for everything from mental health to social support to systems advocacy… I was especially proud of how a local team of qtpoc moved our city to action, creating Roots Pride in response to a call for something more all-inclusive, something accessible to those of all economic standing, family status, and ethnic backgrounds. We could still do a lot more. Being a domestic violence survivor, it broke my heart to hear that a local shelter turned away a trans woman by virtue of her driver’s license. There are too many silenced voices and untold stories, but locally were working toward including everyone.

Have you ever experienced discrimination based on your identity? Specifically, in a job setting, when applying for housing or while in public. No response.

Are there issues impacting your LGBTQ neighbors that aren’t visible or part of the local dialogue? Always. Money, healthcare, transportation, and drug abuse treatment. Access to all of these can seem out of reach for some who don’t fit within the conventional paradigm, especially those who are at a geographical disadvantage.

What would you like to see elected officials do to improve life for LGBTQ Pennsylvanians?  More protective legislation, more funding of resources for the disadvantaged queer community, more effort poured into seeking justice for victims of gender-based violence.

Please share a lived experience, anecdote or fact about life as an LGBTQ person in your community.  No response.

Beyond discrimination, what other barriers create challenges for your LGBTQ neighbors?  No response.

What LGBTQ friendly resources are available for your neighbors? A few of my favorites are the GLCC for socialization and links to other resources, Persad for mental health, and Shepherd Wellness for treatment related to HIV/AIDS, and LGBTQ 12-Step support groups for those struggling with drug addiction…
There are many others but I’m not as familiar with them.

What is your greatest fear for the LGBTQ community in Western Pennsylvania? We’re so accustomed to being put down, left out, or forgotten, my biggest fear is that we’ll let that perpetual sense of being “not enough” color our interactions with each other, causing us to feel cut off from the exact sense of community we so desperately want to feel.

What is your greatest hope for the LGBTQ community in Western Pennsylvania? That we’ll keep progressing on the work that’s already started, until the message has spread so far that no one has to feel unwelcome or unsupported regardless of geographic location.

What can allies do to support your LGBTQ community? Come out to our events, limit use of damaging hetero- or cis-normative language, and speak up on behalf of those who aren’t present to defend themselves.

How can gay men and lesbians support the bisexual, transgender and queer members of our community? No response.

What motivated you to take part in this project? To add my particular color of the rainbow to this narrative, for anyone else who may worry that they’re too much or not enough.