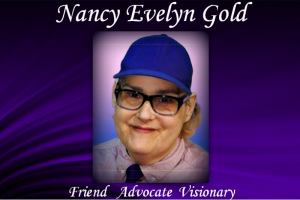 Very sad news in Pittsburgh this weekend as we learned of the death of Nancy Evelyn Gold, a leader in the trans community and acclaimed videographer. Nancy was 51.

Nancy Evelyn Gold was born in 1964 and was the Executive Producer of The Gender Dances Project and the Producer and Lead Commentator of ‘This Week in Gender (TWiG)’ a weekly news program, both of which aimed to increase trans* visibility.

Nancy has worked on LGBT issues from the late 80’s and continued to do so until her death as not only producer and commentator, but also as a board member of the GLCC, Committee Member for Transpride Pittsburgh, Volunteer, Filmmaker, Journalist and Advocate.

I only knew Nancy for a year or so, but I was struck by passion and her determination to stand up for the transgender community.  We worked together on multiple projects, including a terrific PSA about HIV testing with Mayor Bill Peduto.

Friends of Nancy’s have organized a GoFundMe drive to cover the costs of her final expenses. Please contribute what you can. I wish more than anything that we would have to stop crowdfunding funerals. Everyone deserves a funeral.