I was quite thrilled and honored to be one of two local twitter users invited to live-tweet an upcoming fundraiser for Bricolage as an extension of their “tweet seats” initiative. While many theater companies include social media in their media plans, few do so for fundraisers. This is an innovative approach to community engagement and I’m really honored to contribute. 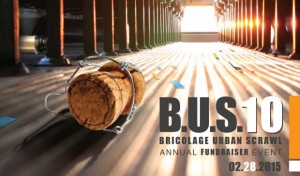 Back for its 10th year, B.U.S. (Bricolage Urban Scrawl) is a fundraiser that puts theatre-making at the heart of the event. Bricolage will collaborate with over 40 local theatre artists, asking them to risk their creative necks for this unconventional and exhilarating fundraiser experience. Inspired by a 90-minute city bus ride, these daring artists have just 24 hours to write, direct, and memorize six new 10-minute plays. The last stop on the journey is an unforgettable performance at The New Hazlett Theater.

There are a number of ways to enjoy this unique event. Begin your journey at Bricolage on Friday night, February 27 with a “Double Decker” ticket, making you a “fly on the wall” with a behind-the-scenes view at the creation of B.U.S. 10—watch as 24 of the bravest performers in Pittsburgh let down their guard and show off who they really are. Or hop on board for the main event on Saturday, February 28 and enjoy cocktails and hors d’oeuvres served in the New Hazlett’s beautiful lobby.

B.U.S. is a fundraiser that will support Bricolage’s 2015 season and gives both distinguished stage veterans and Pittsburgh stage ‘newbies’ the opportunity to put their theatrical skills to the test.
This year’s artists include:

Check out this awesome BUS 8 video by Jason Cohn and learn more about what BUS is really like!

BUY TICKETS HERE
B.U.S. Schedule
Friday, February 27 @Bricolage
7-9 pm: VIP Reception + Actor Exhibition
Saturday, February 28 @The New Hazlett Theater
6:30-8 pm: VIP Pre-Show Reception
8-10 pm: Performance
10-11pm: Post-Show Party
B.U.S. Fares
$150: Double Decker B.U.S (all events Friday + Saturday)*
$75: Party B.U.S. (Saturday VIP reception + performance + post-show party)
$40: Mini B.U.S. (Saturday performance + post-show party)
*$25 of the Double Decker ticket is tax-deductible
Bricolage is committed to providing an environment that is inclusive and welcoming to all patrons. Please identify any specific accommodations that would help you better enjoy your time with us, such as Braille or large print programs, ASL interpretation, audio description or any other requests in the comments section when checking out or by calling our offices at 412.471.0999
For up-to-the-minute news from Bricolage, follow us on Facebook and Twitter.
We would like to thank our generous sponsors:
90.5 WESA
91.3 WYEP
Bistro To Go & Company
Copies at Carson
Greater Pittsburgh Council on the Arts
The Heinz Endowment
The Hyatt Place Pittsburgh – North Shore
Pittsburgh Cultural Trust
Port Authority