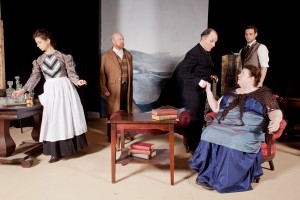 This weekend, Off The Wall Theater is debuting a modern version of the Henrik Ibsen classic “Ghosts” and it has interesting implications for Women’s History Month.

The history of Ghosts is as rich as the story line is intriguing. Strongly criticized by theater critics of the day as “abominable, blasphemous, disgusting, sordid” and shunned by society in general,  Ibsen scriptedGhosts to confront the hypocritical morality of the day. One factor that differentiates playwright HenrikIbsen from his contemporaries was his stance as a leader of the evolving women’s rights movement in 19th Century Europe. He challenged the status quo that women were obligated to accept the infidelities of their husbands, along with other unspoken improprieties. To Ibsen, these destructive secrets were rampant throughout society, roaming freely like unseen ghosts, trailing generation after generation as the phantom ills of society’s consciousness.

The sins of the past are at the heart of Ghosts. Mrs. Helen Alving has accepted her pastor’s counsel and endured her husband’s many infidelities in silence.  Ten years after Alving’s death, she is to dedicate an orphanage in his memory.  Her son Oswald, kept innocent of his father’s profligacy, returns home for the dedication.  His attraction to the housemaid conjures up the ghost of his parents’ unhappy marriage.  This disastrous romance, along with Oswald’s increasing symptoms of the venereal disease inherited from his father, force Mrs. Alving to confront her own “ghosts.”

I haven’t read Ghoss, but I did read Hedda Gabler and The Doll House. Both shocked my sensibilities after being weaned on a diet of moralistic American classics. Admittedly, I struggle to really understand how realism and modernism impacted theater mostly due to my limited exposure.

It is interesting that Ibsen uses the device of an inherited venereal disease as a vehicle to explore the “sins of the father” when we now know that sexually transmitted diseases and infections are not inherited. What is more readily understood is that the son might learn the values and behaviors of the father, particularly in regard to how he treats women.

Off The Wall continues to challenge our understanding of how women shape theater. And to help you appreciate that, we are giving away a pair of passes to see “Ghosts”

To be eligible for the tickets, just leave a comment below explaining why you would like to see this play.  Winner will be selected on Wednesday March 4. You can select the performance of your choice. 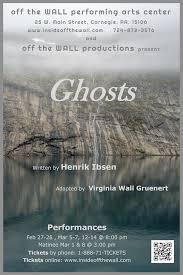