UPDATE – I ditched Rafflecopter. To enter, just leave a comment. Make sure I can get in touch with you via your comment by linking it to your email/Facebook, etc. That’s it. Comment. (Folks who entered via Rafflecopter have had their entries transferred – no worries.)

As we gear up for Pride and the 45th anniversary of the Stonewall Riots, it is natural that our thoughts turn to LGBTQ history. Controversial and otherwise, movies like “Surviving the Plague” “The Dallas Buyers Club” and the forthcoming HBO version of “The Normal Heart” have us collectively revisiting, reviewing and rethinking our history and how we are telling that history to millions of people who weren’t there.

One important voice in that dialogue is that of the “Lesbian Avengers” a lesbian activist group and social movement which wrest itself out of the foundations of HIV and reproductive choice activism to demand attention to lesbian issues. It is a history – a herstory perhaps – that is unique and powerful and somewhat uncomfortable in an era where such a thing as “Gay Inc” is a million dollar industry. The history of the Avengers is a fusion of tens of thousands of stories of coming out, growing up and stepping forward to demand liberation. 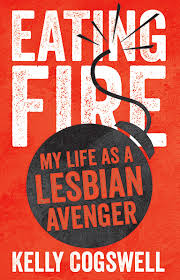 Cogswell’s tale takes us on an intimate march through the backdoors into the decision-making, the power and the creativity the Avengers brought to the forefront of a community grappling with its emergence in American culture. It is a fascinating glimpse into a decade of lesbian activism that is often swallowed in the shadow of marriage equality, the vileness of the TERF movement (Trans Exclusionary Radical Feminists) which I adamantly abhore and the ongoing exploration of sexual and gender identity. I highly suggest you read this book to better understand how we got to where we are today and what our collective history as queer women has to offer us as we continue to strive for equality and liberation.

While Pittsburgh’s history of queer radical activism is a bit more genteel than other cities, we can proudly boast that our legacy from the Avengers is radical – the Dyke March grew into the Dyke and Trans March under the capable leadership of Eli Kuti, a feminist transmale activist whose own memoir will one day be equally powerful I’m sure.

Pittsburgh’s 2014 Dyke and Trans March will return to Bloomfield in mid-June and to help you get ready, I am giving away one copy of Kelly Cogswell’s book. This is a must have social justice handbook and memoir.

Contest opens today and ends on May 22. Good luck!