She was “fine” the day before.

Well, as fine as  an 11-year-old dog with lymphoma could be. She ate, she played, she wagged her tail. She made her very special Mona sounds – low growls and whines – and she slept.

But when I woke up that day, she wouldn’t eat breakfast. She was panting a bit even though the day wasn’t warm. And I knew. I knew before I reached to feel her neck lymph nodes. The shocking enlargement wasn’t really shocking, rather I was aware of her warm body and her heart beating beneath my hands as she watched me silently confirm that today was her last day. 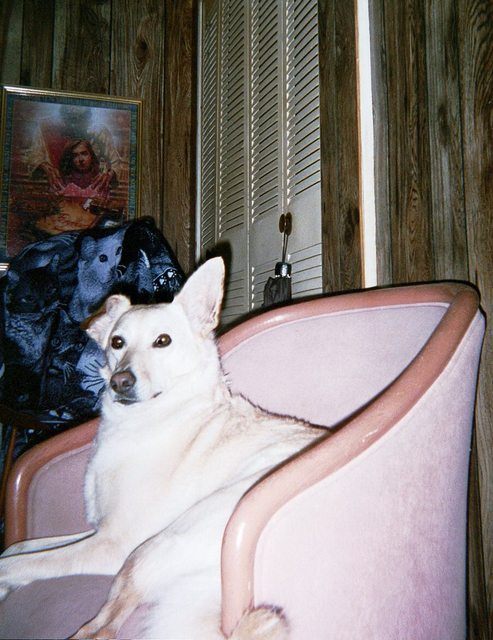 Mona’s diagnosis caught us by surprise the previous May. She was fine and then her neck was enlarged. The vet told us it was cancer. Chemo was an option to buy her quality of life. We decided to go that route so every few weeks or month or so I would drop her at the vet on Friday mornings and pick her up after work. She rarely experienced side effects and the swelling subsided. We changed her diet. She gave us love. It was a win/win.

Then on Christmas Eve, the nodes were swollen again. We spent the entire day at the ER vet to have our fears confirmed – the cancer was back, but she wasn’t suffering at this point. We saw her regular vet a few days later and decided to take a less aggressive approach to keep her comfortable.

And then in March, she wasn’t comfortable. I called off work and made a vet appt for later in the day when Ledcat could be with us. I offered her forbidden treats but she wasn’t interested. I brought her up on the couch with me, but she preferred to sit in her dog bed in the corner. I went and sat with her, just trying to soak in the feel of her silky ears as I rubbed them and she gave a little sigh of contentment.

I wanted time to stop. But it flew by and I knew that I was postponing the inevitable for my own sake, not hers. So I called the vet to push up the appt and Ledcat left work early. She wasn’t suffering, but why was I waiting? There was no hope.

I remember sitting on the couch watching her breathe in and out and trying to imprint her on my mind. I breathed in her scent and felt the slightly coarse patch of fur on her back and rubbed her belly. I just held her so I could let her go. Time did slow down. Then I made that second round of calls and faster than I could imagine, we were at the vet and it was time.

The only thing I remember about leaving is clutching her green leather collar in my hand and asking Ledcat to stop and get Indian takeout for dinner. I wanted to do something normal. I went home and gave her collar to the other dogs to sniff, then I ate my dinner while tears rolled down my face.

And even though I tried to stop time, I forget. Sometimes I forget the sound of her bark or the way she preferred to sleep or other little things. When I feel sad, I remember that she didn’t have a bad day. I sped up time to make sure of that.