If you could have a guarantee that one, specific person was reading your blog, who would you want that person to be? Why? What do you want to say to them?

I have a list. It is not in order of preference.

First, Mayor Bill Peduto’s deputy chief of staff, John Fournier. It would be irresponsible for me to want the Mayor to read my blog every day. As Deputy Chief of Staff, John is well positioned to absorb my scintillating insight into City affairs and share the necessary details with Chief of Staff Kevin Acklin and Mayor Peduto. So it is like three in one. Seriously, John is a bright guy with strong LGBTQ ally leanings so it would be an honor to know he read my blog and that I might be able to contribute to #NextPgh

My message to the Mayor’s team? Let’s get this LGBTQ Task Force rolling so we can fix the serious breakdowns in previous policy and ensure our transgender residents are treated with fairness.

Second, I would love if Tony Norman read my blog. He has told me that he does not, but he does read it when people send him specific links. After flirting with the idea of sending him a link automatically each time I post, I realized that  I simply need to raise the bar on the quality of our content to capture his attention. Tony Norman is a columnist with the Pittsburgh Post-Gazette and probably one of the coolest journalists in town.

Third, Lindsay Patross. She is the editor of I Heart Pittsburgh among many other hats she dons regularly. It would be an honor to know that she valued this blog as a source for someone who also loves Pittsburgh.

Message? Lindsay includes a lot of LGBTQ content so I suppose I’d just like to increase the variety of her sources.

Fourth, is a tie between Heather Arnet and Vanessa German. That my words resonate with them enough to keep them coming back would simply blow my mind. If I could in some small way inspire such amazing and creative women, that would be humbling. They collaborated on “Root” which was the best show I saw in 2010, a year when I was struggling mightily just to survive.

Message? Here’s what’s happening on the ground. Some you may know, some you may not. And btw I am here to help champion your messages, too. Plus, thank you.

Finally, all of the small LGBTQ owned businesses. Read and say “Hey, I’d like  that woman to create social media content for me.”  🙂 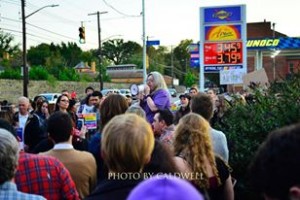