But the bill might at least get a hearing — and that “is critically important,” Sims says. “We haven’t had people testifying before us about the impact of discrimination, saying, ‘You’re telling me I’ve lived and worked here my whole life, but I’m not treated equally?'”

Metcalfe might be resistant to such pressure, says Sims, but voters could have more luck with House Speaker Smith: “People should be calling the speaker, and saying, ‘You knew what would happen by assigning this bill to the State Government Committee. So either you support discrimination, or you’re taking orders from the Tea Party.'”

“Pressure needs to be brought on Republican leadership,” agrees the ACLU’s Hoover. “Hopefully, it’s just a matter of time.”

Hopefully is not good enough for my friend who lost his job last week.

This is Speaker Sam Smith. 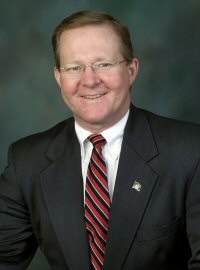 Call him today and say “You knew what would happen when you assigned HB 300 to the State Government Committee. So either you support discrimination, or you’re taking orders from the Tea Party.” Ask for a written response.

Here’s his Facebook page. Post the quote. https://www.facebook.com/repsamsmith (I just posted and wonder how long until they take it down?)