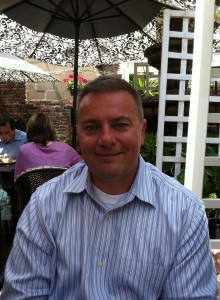 Mike is the chair of GLEC so I’ve only met him in person a few times – mostly via email and Facebook. He works pretty damn hard to promote networking opportunities. I also appreciate that he sees the connection between local politics and what’s happening statewide and nationally.

Tell us about the very first LGBTQ person you met and what that meant for you. My friend Scott. He opened up a whole new world for me that scared me to death.

How do you stay informed on LGBTQ issues? I am on the board of Equality PA, we are involved in day to day politics

What is the most important issue facing the LGBTQ community today? PA statewide non-discrimination, followed by marriage.

If you could wave a magic wand and change one thing in Pittsburgh’s LGBTQ community, what would it be? To have the community be less apathetic about the issues we face and get involved. Especially the lesbian community. I put on many events for the whole community and I find that very few women participate. This support is imperative to achieve our goals as a community. And I have personally reached out to the lesbian community to ask for support and I have had little success.

Past or present, favorite LGBTQ character in television, film or literature? Jack McFarland from Will and Grace

What is one simple thing a reader can do to support the LGBTQ community? Volunteer and donate to organizations such as Equality PA