The Post-Gazette ran a piece on Tuesday exploring economists predictions as to how our “green values” might shape our future shopping decisions.

The sharing trend that became popular with Zipcar is likely to expand to other industries such as tools and baby gear as consumers readjust their spending patterns to focus less on conspicuous consumption and more on making thoughtful choices with their money, says one leading social forecaster.

But another forecaster disagrees, stating that people are going to opt for price over everything else.

“While they can have the best intentions, it’s a stomach issue and a pocketbook issue. People are falling out of the middle class in huge numbers,” said Mr. Celente, who forecast the popularity of gourmet coffee years before Starbucks became a household name and bottled water decades before Coke and Pepsi got into the business.

Interesting that bottled water and gourmet coffee present many ethical dilemmas as well as typically being luxury items. 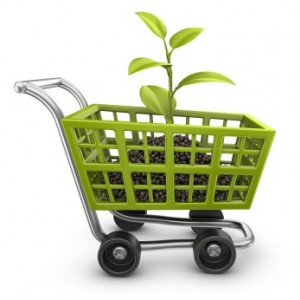 I suspect what they are getting at is that the middle class and those with disposable income are changing their patterns and this will spread as the suppliers adjust their production. But green is not just luxury value – people are becoming more aware of how environmental racism and similar trends disproportionately impact low-income communities and looking for tools to take ownership of their environment: rural, suburban and urban.

That was an aspect of The Pittsburgh Tote Bag Project I tried to emphasize – that providing tote bags wasn’t simply about reuse, it was about empowerment by putting real green tools in the hands of people who need them. The same is true of other items we distributed – water bottles & travel mugs are transportable as well as useful. And when you don’t have a lot of dollars, the $.10-$.30 discount for using your own mug can make a huge difference.

The key is that green values themselves are not limited to middle class families or people who are situationally poor (like students who hopefully will move into the middle class when they find work.) The values are being taught in school, at church, communicated by social and traditional media and being embraced as advocacy and social justice values. As the values solidify in our identities, the decisions make more sense – we think about our consumption.

The problem might be barriers constructed by the middle and upper classes – do we established businesses with green values in communities that are accessible by low income families? I mean who owns the grocery store after all? Do we as a public demand that tax payer subsidized farmer’s markets bring locally grown fruits and vegetables into spaces that are accessible? Access can be a barrier.

Another barrier? There are so many green “swag” items we take for granted – how many reusable water bottles are in your home? Get them out where they can be used – and they wil be used. I just opened a drawer this moring to retrieve a certain bowl and realized there were 4 unused water bottles crammed into the drawer – what kind of green value is that? It is great that I use my two regular water bottles, but obviously there is some work I need to do to get the items out of the drawer and into use somewhere. (That’s both green and anti-consumerism.)

So there are opportunities on both the systemic level (advocacy) and the individual level (our “stuff”) to make consumer decisions that benefit the larger community.

There’s some comparison between this and LGBTQ-driven consumer behavior. I’ll explore that in another post.