I’m typically a fan of the multi-generational family “coming to America” novel. I think it may be all of the James Michener books I read in high school. So I had high hopes for this latest novel, A Good American by Alex George. 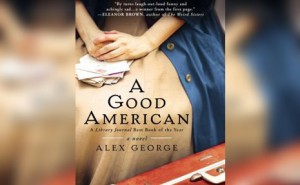 While interesting, the novel lacks a sense of being grounded in reality – it feels like a forced revision of a family’s immigration to the US. The romance of protagonists Jette and Frederick is somewhat silly, but the impact of immigration from Bavaria to Missouri has a rather fascinating story of its own. The story is at its best when it focuses on the very minute details – especially of the minor characters. I was somewhat put off by the glossing over of slavery, racism, and xenophobia in the US. I wish George had fleshed out those very real dynamics a little more.

The novel bounces back between music and food as symbols of becoming American. As an American of German descent myself, I was disappointed that the experience of immersion was lost in this ping pong dynamic.

However, the book did improve once Jette and Frederick are settled in Missouri and working through the consequences of their choice to immigrate. George does minutia very well and perhaps would be better off in the next novel by focusing on the meta rather than such a sweeping plot. And I did learn quite a bit about Missouri in the book – please note that the book’s opening chapters take place during the same time period as Downton Abbey which was a little bonus for me – a much unexplored chapter of our history.

Have an opinion? Follow along in the BlogHer Book Club discussion.

Disclosure: ”This is a paid review for BlogHer Book Club but the opinions expressed are my own.”