So, heck yeah, I'm still a little sore.  Thanks for asking. I actually did pretty well until my last trip down the narrow flight of stairs at work.  Thankfully, my wrists and fingers are fine so I can blog away.

How about someone saw my Twitter updates about the Steel City Dems endorsement meeting and asked for information on how to get involved?  Anonymous commenters be damned, we are doing our share of recruitment here at lesbian central.  🙂

So before I get started, let me update you on my ongoing attempts to get responses from the offices of Mayor Luke Ravenstahl (on the GLBT Advisory Council) and Chief Executive Dan Onorato (on the cyber town hall meeting).  Let me check my notes …oh, that's right.  No response from Joanna Doven or Megan Dardanell.  Nothing.

I arrived at the endorsement meeting just as the networking was wrapping up which give me a chance to snag a front and center seat for the “meeting” portion of the meeting.  I took some notes as fast as my Blackberry permitted.  I was sort of annoyed that I forgot to bring a pen, but did enjoy the discomfiture of certain folks who believed I was live blogging.  Ledcat accused me of getting carried away with photographs, but as no one stood still very long I had to delete quite a few less than flattering shots. The lighting was terrible for photos, but I took a few anyway.

First up was Dan Onorato.  Frankly, I have no idea why he spoke as he is not running for anything.  I was not impressed.  Regarding the County Anti-Discrimination ordinance, he said “we have to get legislation that we can pass.”  He also acknowledged a new national “tone” and that we must “keep the tolerance level where it should be.” 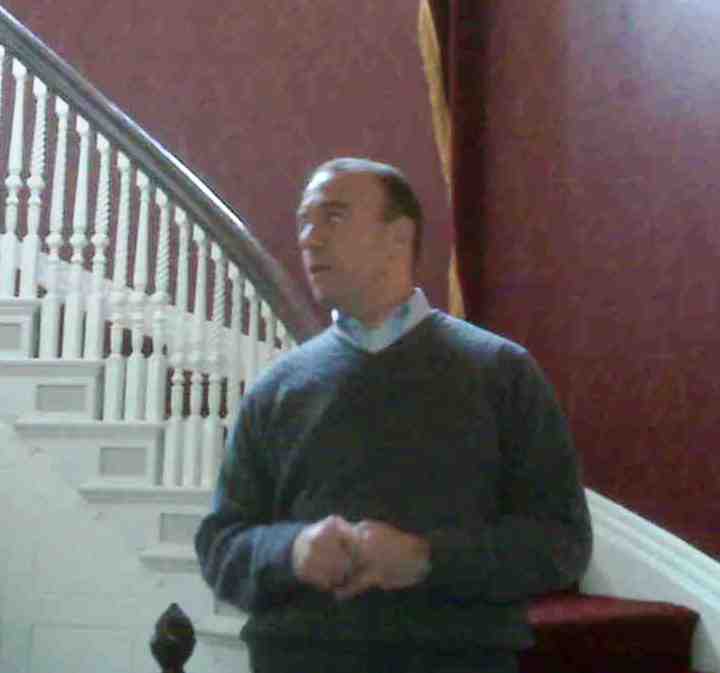 Huh?  I hate to let you down right from the get go but this was just absurd.  Legislation that can pass sounds suspiciously like “lose the gender expression language and you got yourselves a deal.” And what the hell does it mean to keep the tolerance level where it should be? Tolerate homosexuals because the country elected a black man?  This is what the third most powerful Democrat in the state chooses to talk about at a gay meeting?  Not his position on the ordinance.  Not his position on domestic partner benefits for his employees.  Not plans to diversify his staff, train his first responders or any such issue.  No, he spoke the language of capitulation and I think that is a bunch of bullshit.

The worst thing is that once again someone who does NOTHING for our community is going to earn bonus points for merely showing up.  You can see where Governor Chief Executive Onorato is going with this.  There is simply no excuse for a man of his generation and party affiliation to need to be brought gently along to see the moral imperative of building a more just and equitable Allegheny County.  If he can slaughter geese and sleep easy at night, he can do a better job on our issues.  Let me rephrase that.  He has the power to do something now about domestic partner benefits and he doesn't.  He should NOT sleep easy.

I am mightily disappointed in whomever made the decision to give him the microphone.  Thanks for once again devaluing our endorsement.  I fully know I am going to get a lot of flack for this opinion, but this was an egregious violation of the community's trust with such important legislation hanging in the balance.

We did, at this point, learn that the County Ordinance is in committee and that they are hashing out the financial side of things — how to pay for the education and enforcement components.  It was alluded that there might be a possibility of combing HRCs between the City and County.  If that happens without the domestic partner benefits issue being successfully addressed, shame on everyone.

We did not learn how he plans to vote.  We can assume, but we can't know.

State Representative Dan Frankel spoke.  One of the elected officials who has been there on every vote since the dawn of time, he deserves any chance to speak he wants.  He wants us to support HB 300 which will expand statewide protections to include sexual orientation, gender identity and gender expression.  He asked for our “passion and persistence.” 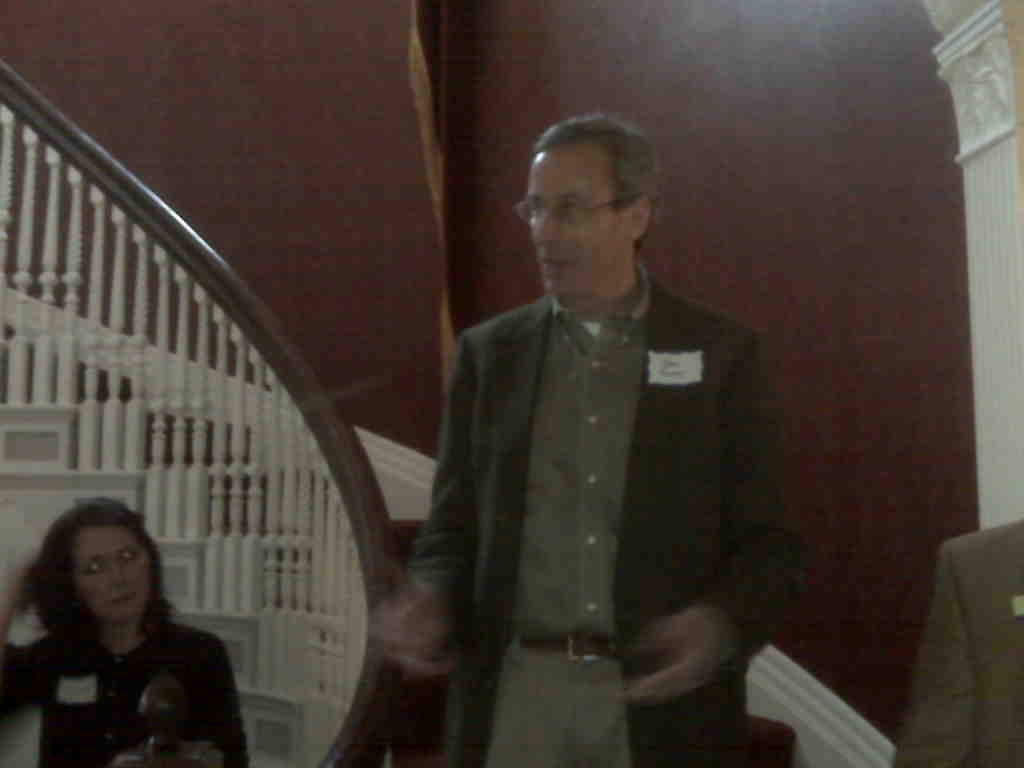 Then several judicial candidates spoke, with a very awkward interruption by Sheriff Bill Mullen who was clearly the most uncomfortable person in the room.  I have no idea why a Sheriff should speak before a judicial candidate but he really had nothing relevant to say anyway.  No word on training his staff or hiring more gay people or pretty much anything except “please vote for me.”

Back to the judicial candidates.  I was completely lost.  It was like a  blur of people throwing around terms like “super lawyer” for a long period of time.  I *think* the important thing to remember is that there is one opening on the Supreme Court and this could have a significant impact on legislative redistricting after the 2010 Census.  The Court is even divided between Democrats and Republicans.  Go read the questionnaires for more details on the individual candidates.   Here is what stood out to me.  (I fully admit I forgot to bring a copy of the ballot home with me so I don't know everyone's names — I did try to wade through the Steel City page, but I simply could not figure out a few. I apologize and feel pretty stupid.)

Court of Common Please candidate Arnie Klein made a very impassioned speech about a judge needing experience across multiple divisions.  I agree and I endorsed him because he said it and because he has been at almost every gay political event I've attended.  I genuinely  believe that Arnie Klein would be fair and respectful to gay people.  He's worked hard to earn our trust.

Don Walko hopes to leave the State House for the Court of Common Pleas.  Walko is another one who has been there on the votes and earned our support.

Joe Williams, I had my doubts about, but when he spoke, he got me.  He said two things.  He worked on a Persad committee where he learned a lot about gay issues.  Second, he spoke very movingly about the unexpected emotional impact of serving on the bench such as concern for the young children of the parent he just sentenced to prison.  Joe, you got my vote.

There were several  female candidates.  This is my ugly secret. I don't remember who said what.  One read something kindergarten children wrote about her.  Another one is pro-choice.  But I was very confused.  I do recall that one woman is running for the Commonwealth Court which Ledcat explained is a pretty specialized court.  Why do we vote for people to fill judicial seats that require such a high level of skill?  That sounds better suited for appointments of qualified people rather than campaigns.  I spoke after the meeting with a female candidate who knows a lot about gay issues, but I cannot recall her name and I can't help but wonder why she didn't say that in her speech?

Still, none of the judicial candidates really spoke to the issue of having gay people in their courtrooms.  I guess judges have to be circumspect, but I would like to hear an affirmation that they understand that sentencing a gay parent may have extra complications for the kids left behind.  Something a bit more concrete.

Hugh McGough has some pretty tough concrete stuff to say.  He's running for the Court of Common Pleas and he is openly gay.  He talked about his experience in City government as the face of gay Pittsburgh, in what I hope was meant to be a reflection that we have a long way to go when the employee who happens to be gay is the only channel for elected leaders to get a feel for gay issues.  Hugh certainly sets the bar high, running as an openly gay candidate, for those who argue that we have to take baby steps in politics.  Good for you, Hugh.  I voted for you, too.

Onto County Council.  Thomas Michalow who is running for District One publicly committed to support the County ordinance and hoped it would pass before he gets elected.  Apparently, this is a real opportunity to tumble a Republican seat so get out there folks and unelected Matt Drozd.

Amanda Green for District 13 (my district) was the acknowledged rock star of the evening.  She was also very adroit at handling the awkward moment when people basically said they are raising money for her (and no one else). I was embarrassed, but she was classy. She was very matter of fact about her support  leadership in creating a more just Allegheny County.  More on her later. 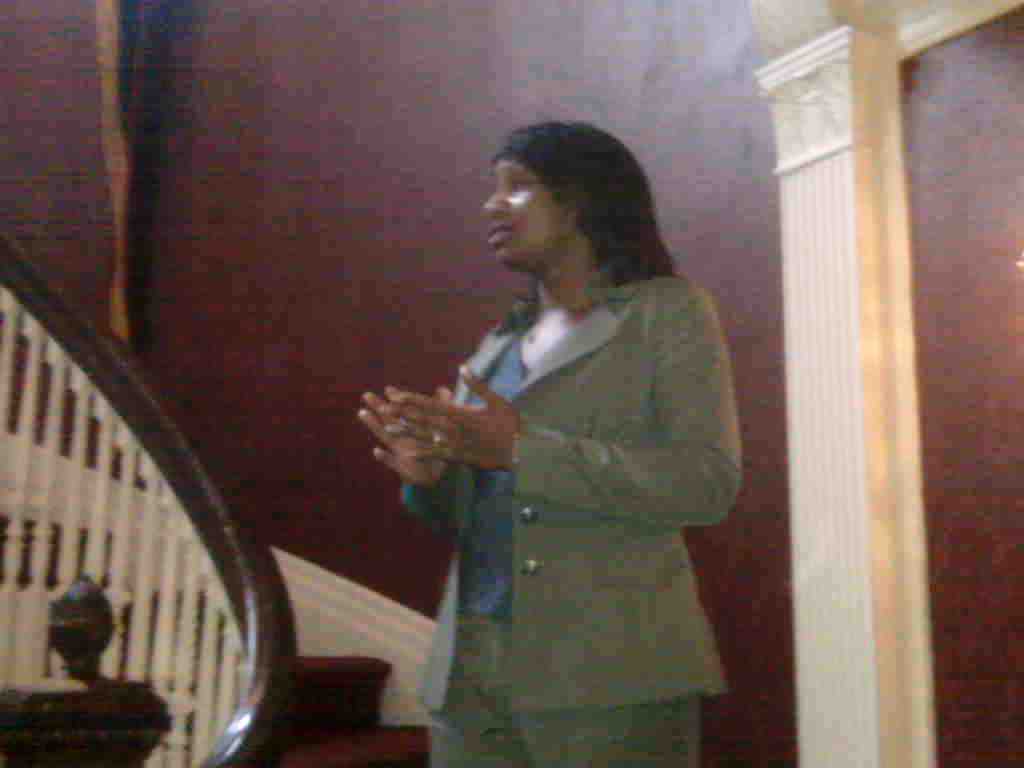 Next up were the Mayoral Candidates.

Carmen Robinson is one challenger. She was pretty tough on crime, but didn't have anything more specific to say.  She claimed that the solvency rate for the City of Pittsburgh was over 95% in 1991 and is now below 50%.  If that's true, someone needs to pay attention.

Patrick Dowd led the amen corner.  He was eloquent and excellent.  I'm glad he's already elected because we need all the straight white male allies we can get.

Mayor Ravenstahl.  Sigh.  At least he was supposed to be there, even if he did bring his body guard for crying out loud.  The only other person in Pittsburgh I ever see with a bodyguard is Mr. Rooney.  Luke claims his Administration is all about diversity and inclusion.  In the next breath, he admits they are still looking for nominations for the LGBT (he changed the initials — someone is working with him) Advisory Council. 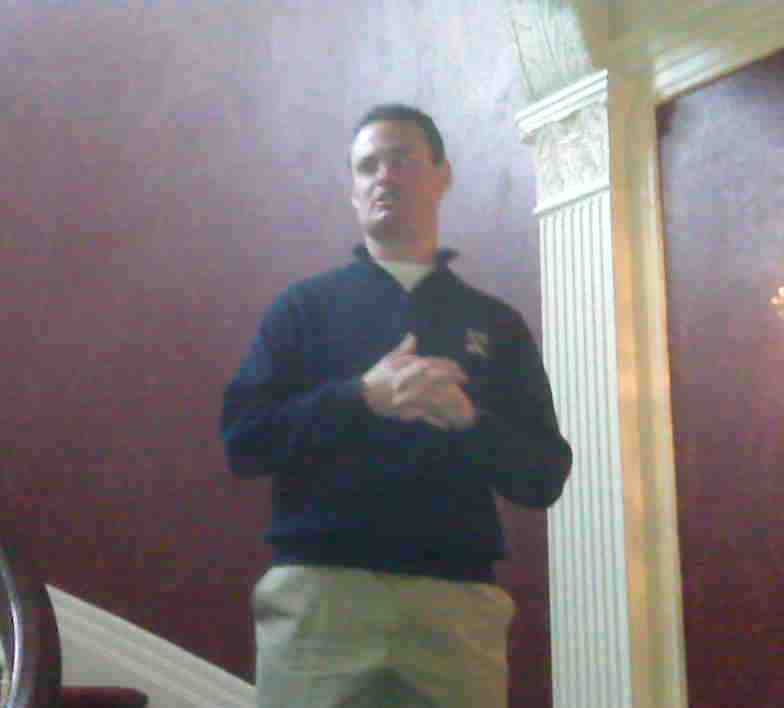 Natalia Rudiak from City Council District Four is the only candidate in her district that returned a questionnaire. I know some of you live in Carrick.  Pay attention. 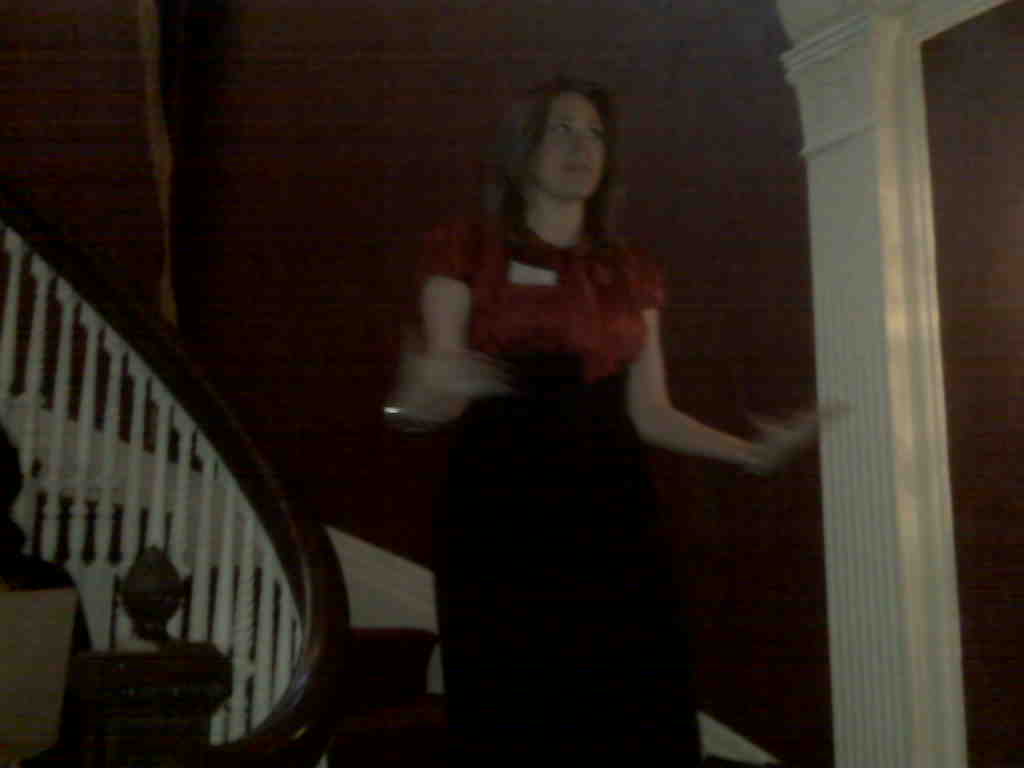 Robert Daniel Lavalle is challening Tonya Payne for her District 6, which is my City Council District. He seemed earnest, but I disagree with his claim that Tonya isn't visible in the District.  I've seen her more frequently than anyone else who represents me.  She holds meetings, she responds to email messages, she talks pretty tough.  She was at the endorsement meeting before I arrived, but apparently had another commitment and had to leave.  I”m sure Mr. Lavalle is a nice guy because Ledcat reported he seemed puzzled when she responded “Yes” when he asked if she had ever seen Tonya in our district.  Tonya marches in the Pride Parade.  We're good here.

Last up, Bill Peduto.  Now you know I have not hesitated to pull punches when I have disagreed with Mr. Peduto or others.  I may disagree with him on occasion, but he very simply reminded us that he, along with Dan Frankel and Michael Lamb, have walked with Steel City Stonewall Democrats from the very beginning.  Others belong in that pantheon … Doug Shields, Rich Fitzgerald and Patrick Dowd. 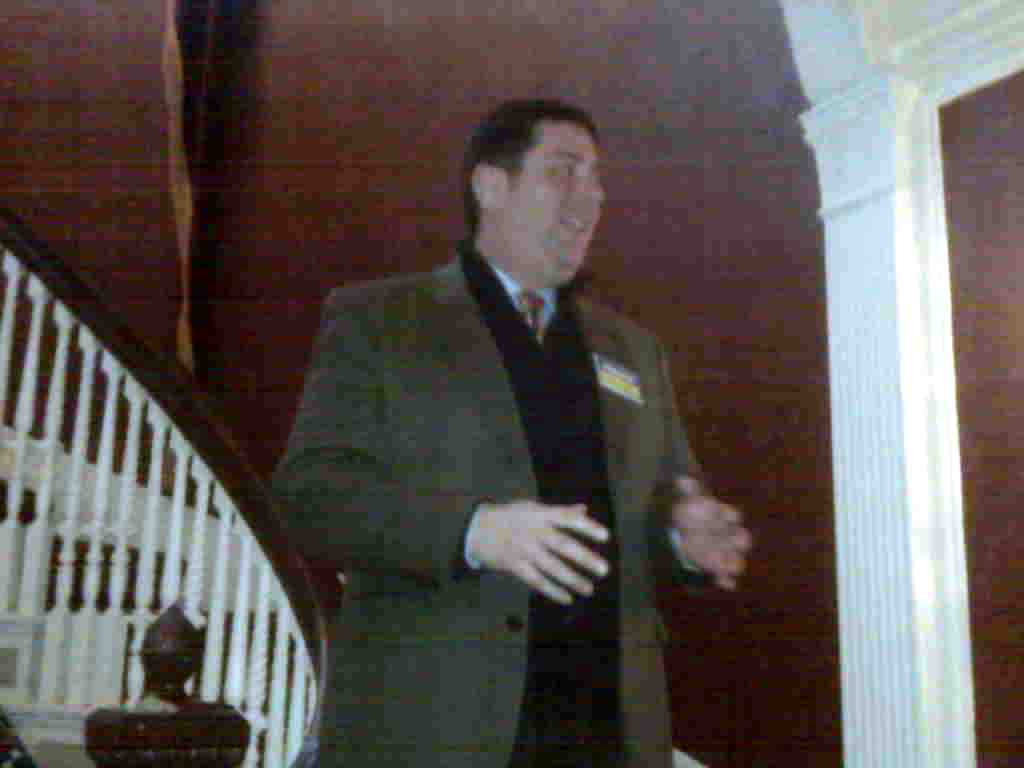 But you know what is cool?  We now have someone among our champions who is not a white straight man.  Her name is Amanda Green.  She doesn't have an East End district with a built in cushion of progressive voters to fall back on (not my words, but a frank acknowledgement from Bill).  Now don't get me wrong — I think Amanda joins the League of Justice and it wouldn't even exist if not for Bill, Dan, Doug, and Michael.  I'm just glad that our allied leaders are becoming more reflective of our community.

Bring on the new alliances.