"
Sue is founding editor of Pittsburgh Lesbian Correspondents blog, established in 2005.. She has an MSW from the University in Pittsburgh and a BA in Political Science from Marymount University. Her undergraduate claim to fame is a six month stint as an intern with then Congressman Rick Santorum in 1991. Born and raised in West Mifflin, Sue attended college in Washington DC, then graduate school in Louisiana and ended up in Kentucky doing social service ministry. She returned to Pittsburgh in 1997. She now lives on Pittsburgh’s Northside with her wife, Laura. She was among the first out LGBTQ people named to Pittsburgh’s 40 Under 40 in 2004 and is a graduate of Leadership Development Initiative Class VII. After being fully and permanently disabled in 2010, Sue has continued to serve the community. She founded the Pittsburgh Tote Bag Project to address hunger and environmental issues. In 2015, she launched the #AMPLIFY LGBTQ archive in conjunction with a two-year artist in residence stint with Most Wanted Fine Art. Sue and her wife have fostered over 25 kittens through Pittsburgh CAT and Homeless Cat Management Team, and now manage multiple community cat colonies in their neighborhood. In 2020, Sue cofounded the Pittsburgh MasQUe ProjecT to support the queer and trans community during the pandemic, distributing tens of thousands of face masks and other supplies throughout the region. In 2021, Sue created the #PghCatFolx projects to support neighbors working with community cats. Under that heading came the Dr. John P. Ruffing DVM Pet Food Projects, memorializing one of her very best friends who died in 2007. In 2021, Sue worked with community leaders to develop and establish a 501c3 nonprofit organization, Pittsburgh LGBTQ Charities (PLC) where she currently serves as Board President. PLC absorbed the #PghCatFolx projects. Also in 2021, Sue was the first person in history appointed to the City of Pittsburgh LGBTQIA+ Commission and was unanimously elected as one of three inaugural co-chairs. Her blogging has garnered numerous awards Favorite GLBT Media Publication - 2012, 2014, 2015, 2016 (Keystone Alliance Gaylife Newsletter Reader’s Poll) Favorite GLBT Social Media - 2013, 2014, 2015, 2016 (Keystone Alliance Gaylife Newsletter Reader’s Poll) Best Local Blogger - 2016, 2019 (Pittsburgh City Paper Reader’s Poll) LGBTQIA Pittsburgh’s Best Blogger - 2020 (SisTersPgh, People’s Pride of Pittsburgh) LGBTQIA Pittsburgh’s Best Lesbian Activist - 2020 (SisTersPgh, People’s Pride of Pittsburgh) Outstanding Blog - 2019, 2022 (GLAAD Media Awards) Sue believes in identifying and filling gaps in supports & services rather than recreating the wheel. She uses both her undergraduate and graduate degrees on a regular basis as a blogger and activist and regularly circulates her 1991 internship photo just to shake things up on her social media feeds. Her own experiences with cPTSD, bipolar disorder, anxiety, and other health challenges have fueled her health blogging and activism. She also writes extensively about her family history, drawing on her amateur genealogy hobby. The blog regularly reviews arts and cultural events as well as exploring restaurants, soap opera storylines, and hyper-local news. Sue and her wife Laura have been together since 2003. They were married on a very cold February 2, 2021 in their backyard at a very small ceremony co-officiated by their pagan priestess friend, Anne, and then-Mayor Bill Peduto. They have six niblings, four in Pittsburgh and two in Philadelphia.
Main Page 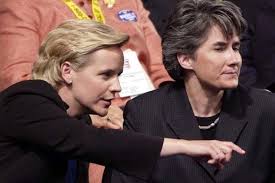 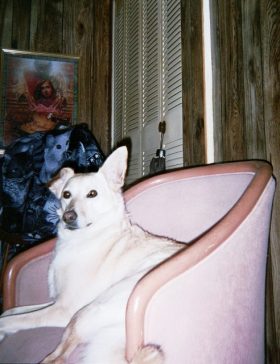