I drafted this for another purpose. It wasn’t utilized, so I decided to publish myself just for the record. ~ Sue

Women have always walked these grounds we know as Pittsburgh, forging paths and paying the way for future generations. The documented history of Pittsburgh might have primarily been controlled by men, but the living, breathing experiences of women have always, often silently, been intertwined in that narrative.

So to has the narrative expanded our understanding of queer women’s identities as language more fluidly described our lived experiences, organizations understood the power of naming who they serve, and we realized to be queer and trans women intersects with our racial, ethnic, health, and other identities.

Trans women are women. Nonbinary, gender nonconforming, gender creative, gender defying individuals may or may not identify as women, but those who do not identify as men, especially cisgender straight men, have historically found refuge or allyship in the women’s community, united by that oppression in a patriarchal system and forging new bonds.

As we honor the legacies of Women’s History Month, we see the intersections and the overlaps, to honor the silent voices, to remind all of us that being a queer woman is a source of pride. That no one’s experience of being a woman takes away from another person’s different experiences.

The documentation of LGBTQIA+ women is challenging to find, but women who are queer and trans have also always been part of that narrative albeit in unconventional ways. This statement acknowledges and honors their contributions to the robust struggle for equity and equality, a foundation that serves LGBTQIA+ women well in an era of unprecedented challenges, an acknowledgement of our own lived experiences as women by the First Peoples of these lands recognized.

The native peoples of this region included women whom we now describe as LGBTQIA+ as valued and revered parts of their communities. Leaders and warriors, caretakers and community builders, we owe them a debt of gratitude for lifting us all up long before many other cultures and continuing to do so.

Other women have blazed trails, most however remain nameless. We say their names in our hearts and whispers.

A few notable women whose names we know

Women created affirming spaces, including Shawn’s Bar on Fifth Avenue in Uptown, the Norreh on Herron Avenue, the Tender Trap as well as the Wildsisters Women’s Cultural Collective and eventually Bloomers. Birmingham Booksellers came before St. Elmo’s. The cooperative effort of the Gertrude Stein Memorial Literary Society proclaiming that where LGBTQIA+ women are gathered, there is power and energy. In the late 1970s, Amazon Odyssey drew intellectuals and politically radical women together.

Women were vital part of Pittsburgh’s response to the HIV/AIDS crisis both in terms of providing direct care and engaging in direct action through Cry Out Act Up!. While some were behind the scenes, many women were front and center throughout Pittsburgh’s history responding to this epidemic and generating new health sources such as the ESTHER project and New Voices for Reproductive Justice among many others .Women and nonbinary individuals also responded to the current pandemic, creating the Pittsburgh MasQUe ProjecT as well as actively supporting other resources.

In these uncertain times of the early 21st century, LGBTQIA+ women build and helm organizations, lead Pride events, respond to community needs, and continue to shatter glass ceilings. We literally bear arms and sit in the seats of political deciders. We say our names and stand on the shoulders of those who didn’t have that option. Rather than seek a place at existing tables, we build new tables that are representative, inclusive, and just.

Honor and invest in the LGBTQIA+ women in your life and community. 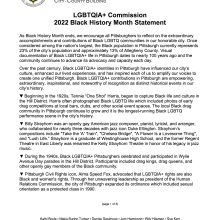