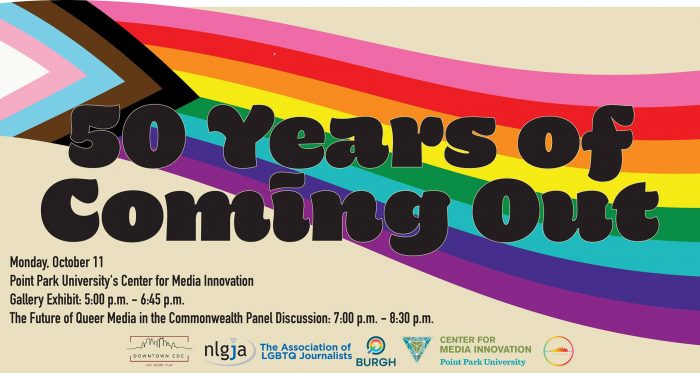 Here’s a bit of exciting news. I’ve been invited to participate on a panel discussion about the state and future of queer media sponsored by The Association of LGBTQ Journalists Pennsylvania chapters. I am the only blogger participating, one of two women, and eight out of nine cisgender (I think) and seven out of nine white folks (I think.)

I’m honored to be included as I often point out I am not a journalist. I am a blogger, a community organizer. My platform is a media resource, but not a news outlet. These distinctions are important because journalism is under threat and it is a craft, a trade, not a hobby or investment opportunity.

The event will be livestreamed from Point Park Center for Media Innovation Facebook page.

The Center for Media Innovation at Point Park University is hosting 50 Years of Coming Out, a celebration of the history of queer media in Pennsylvania, on Oct. 11 – National Coming Out Day.  More info here.

The event will feature a gallery exhibit of Pittsburgh queer media dating back 50 years, as well as a panel discussion with LGBTQ journalists, bloggers and communicators representing publications across Pennsylvania, and beyond.

The gallery can be viewed beginning at 5 p.m. at the Center for Media Innovation, 305 Wood St., Pittsburgh, PA, 15222. The panel discussion begins at 7 p.m. A livestream of the event also can be viewed at the Center’s Facebook page. The suggested donation is $15 for in-person attendees and $5 for those who watch online. Those donations will go toward the cost of the event.

The event is cosponsored by the Pittsburgh and Philadelphia chapters of NLGJA: The Association of LGBTQ Journalists, a journalist-led organization working to advance fair and accurate media coverage of LGBTQ communities and issues.

The featured event is a panel discussion, The Future of Queer Media in the Commonwealth. LGBTQ journalists, bloggers and communicators representing publications from Pennsylvania – and beyond – will come together for a facilitated roundtable discussion about the current state of queer media in Pennsylvania and hopes for the future.

“As we celebrate our community’s past, we’re also eager to look forward,” said Kristina Marusic, co-president of the Pittsburgh chapter of NLGJA. “We’re excited to bring together this group of talented LGBTQ communicators from across the state to discuss our hopes for improving the statewide media landscape.”

Panelists for the discussion will include:

“We started planning this event as a history of queer media in Pittsburgh but quickly realized that the gallery exhibition represents the lived experience of many LGBTQ+ people in this region,” said Andrew Conte, Director of the Center for Media Innovation. “We hope the exhibit and panel discussion will set the stage for meaningful thought and conversation about how far all of us have come over the past half-century toward being aware of and supportive of diversity in all its forms – and of how far we still have to go.”