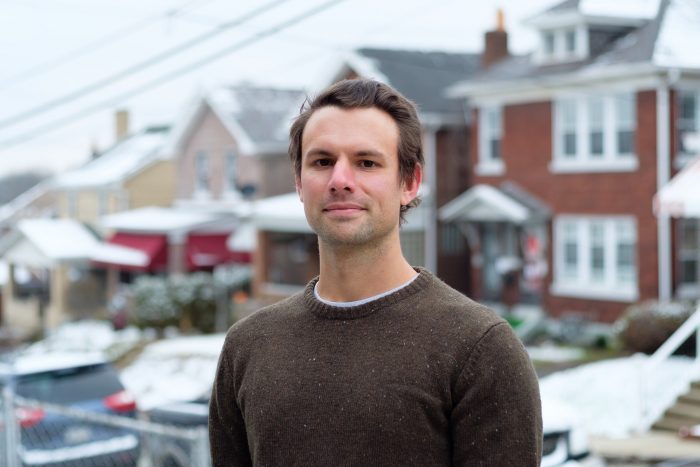 But if a global pandemic and ensuing economic crises aren’t enough to motivate public officials to create real safeguards such as public housing (as well as healthcare, the two of which I believe are inseparable) against public health emergencies, when will they?

This is the sixth post of our election season series ‘Political Q&A’ with progressive candidates throughout Pennsylvania. Candidates can be anywhere in Pennsylvania running for any level of office. Please note that these are not necessarily endorsements, more of an opportunity for candidates to connect with the LGBTQ community, progressives neighbors, and others with an interest in Western Pennsylvania. If your candidate would like to participate, please contact us pghlesbian at gmail dot com.

Connor approached me which I always appreciate. I hadn’t previously interviewed a Green Candidate so this was an interesting opportunity. I admire third party candidates for their willingness to pave the way toward systemic change. The Green Party in particular seems to show up a lot for grassroots actions. As the local Democratic party wrestles to remove pro-Trump members, the idea of a third party seems like a viable option. Read on to see what Connor brings to the discussion.

How do you describe your identity? White cishetero male.

Please tell us about an underappreciated or little known asset in your district.

The aptly named Seldom Seen Greenway is something I’ve been getting hyped around recently. Community members are beginning to talk and come together and organize to make this greenspace more inviting and accessible. It has the potential to be a really beautiful walkable/bikeable corridor from the southern neighborhoods into downtown. Some folks do hike and climb there currently, but it’s still a pretty well kept secret, in part because it needs a lot of work.

Several teammates from our days as student-athletes in middle school and high school come to mind. When we were kids running track together I didn’t think much on how their identities might have shaped their experiences. However, when I reached college I began to understand how harmful stereotypical hyper-masculine athletic environments are, not just for student-athletes who identify as LGBTQIA+, but for cishetero people like me as well. Everyone in our society has a certain amount of un-learning, or re-learning, to do in order to grow as better people. As I’ve learned more about folks’ different identities and myself I’ve thought back on how athletic teams, classrooms and workplaces I’ve been a part of could have been more inclusive and made safer for people of various identities, including LGBTQIA+ people. Feeling safe and heard and seen is something white cishetero men like me take for granted, and as I’ve learned I’ve worked to make my shared spaces feel like that for everyone.

Most recently, this past summer I marched alongside my friends in the Green Party at a few Trans YOUniting events, specifically Trans Visibility Thursdays. The calls for healthcare, housing and comprehensive public safety (that is, outside of policing) were familiar yet very different coming from youth who are frequently denied all three and often much more.

Based on this, what do you understand to be our top LGBTQ concerns and priorities for City Council?

They’re the same as the concerns of all Pittsburghers – housing, food access, freedom of movement, safety, jobs – but the need is more acute than the general population because of institutional and social discrimination.

My understanding of public policy is built on a foundation of systems thinking and social justice – Intersectionality could be thought of as a combination of the two. In order to understand the issues a person faces, you have to see the whole person and understand how each part of their identity impacts their experience. Failing to provide protections or resources for specific groups of marginalized people ensures that inequalities will persist, and those inequalities only multiply for people at the intersections of particularly vulnerable groups. However, understanding class issues must be central to understanding intersectionality in order to build solidarity across our society.

Please identify areas where Pittsburgh municipal code and regulations have an impact on LGBTQ lives, perhaps without us even realizing it.

The creation of the LGBTQIA+ Council obviously could have a huge positive impact on LGBTQIA+ lives. I look forward to learning more about the commission’s initial findings and recommendations. However, passage of recommended legislation will require a council willing to make serious changes in support of equal rights.

The threats of ‘religious liberty’ laws and exemptions target both LGBTQ rights and women’s rights. How does a City Council navigate this equivalency of personal religious freedom with systemic oppression and control of underserved people?

This equivalency is certainly false – I think if you understand the history of just a few assertions of religious freedom you can quickly recognize that it’s typically less about freedom and more about control. For example in Burwell v. Hobby Lobby it is, in my opinion, absurd to assert that an individual’s decision to take birth control infringes on anyone’s freedom to practice their religion. Of course, in that particular case the broader issue is our private/employer-based healthcare system. These arguments for or against the outcome of that case would all be moot with a functioning public healthcare system. This is partially why I also believe we need to rebuild municipal healthcare systems because, again, our state and federal governments fail to provide fully functioning services for us. Especially here in Pittsburgh, a supposed healthcare hub where health outcomes are measurably worse for black women in particular, for-profit healthcare must be held accountable to the public. Yes, tax UPMC, but then use that funding in a way that can strengthen public health.

What are your plans to address affordable housing?

Pittsburgh needs to take on both a short and long-term commitment to maintaining  affordable housing in our city. The recent eviction moratorium, which I hope council will hold up in its strongest form without Mayor Peduto’s amendments, will stop the bleeding as long as council permits it. But, if we don’t do more before the pandemic is over we will find ourselves back in the same very dangerous place, again. We can start now with permanent and higher percentages of mandatory affordable units for new developments that are based on median income rather than “market value.” In the long term, I believe any city that is serious about its commitment to affordability must develop public housing options. This won’t happen overnight. But if a global pandemic and ensuing economic crises aren’t enough to motivate public officials to create real safeguards such as public housing (as well as healthcare, the two of which I believe are inseparable) against public health emergencies, when will they?

One of my first experiences of Pgh City Council was liveblogging a public hearing on domestic violence allegations and public servants in 2007. Fourteen years later, we are still struggling with this issue and allegations of abuse by public servants of all orientations at all levels of government. How can City Council be more proactive in creating a culture that’s safe and free of harassment & abuse for City employees and the public?

I’m sad to learn that – Allegations of abuse must be taken seriously regardless of who they are leveled against. We can’t believe survivors and punish abusers only when it’s politically convenient or popular. There seemed to be a huge cultural shift across America with the #MeToo movement, but then Joe Biden was elected president. Pittsburgh must start locally with building a public culture of accountability and safety.

What do you believe will be the long-term impacts of the pandemic and COVID-19 in Pittsburgh? How can City Council act to protect residents?

The K-shaped recovery in the wake of the COVID-19 pandemic is already very clear, and we’re barely approaching the edge of the woods. The federal and state governments’ inability to help (or indifference toward) working people, especially our most vulnerable and marginalized, has never been more clear. I mentioned above that if now is not the time to overhaul our housing and healthcare systems, when is? When else should governments put their own people to work? When else should we leverage weaknesses in supply chains and build our own resilience in production of food and goods? I believe Pittsburgh City Council and its mayor have a responsibility to try to address these issues, not as pet projects but at scale. This is the only way to work ourselves out of an uneven recovery and ensure that our society is stronger at the other end, as well as better prepared for the next crisis. Because, unfortunately, more crises both natural and manmade are inevitable.

Why is it important to elect Green Party and other third party candidates to City Council in Pittsburgh?

The Green Party’s independence, activism and rejection of corporate influence would signal a tectonic shift in Pittsburgh City Council. The influence of developers, corporate nonprofits and old money in city council is endemic. Working people have to reject this politics-as-usual if we want a city council that acts in our interests, and not their already-powerful friends.

Tell me about your endorsements and supporters.

We were incredibly honored to receive the endorsement of the Pittsburgh Chapter of the Democratic Socialists of America, an organization whose strength in educating and organizing we hope will inform our campaign. We were also very excited to be endorsed by No Cop Money PA, whose critically important work strengthening the abolition movement and unmasking the influence of police unions in local politics will be key to building a truly equitable society.

I appreciate your invitation to take part in this series and answer some great questions! I look forward to keeping these important conversations going.

We can be found on facebook at Connor for Council (@connorforpgh); on Instagram @connorforcouncil; on Twitter @connormulvaney; and if you’re able to donate to the campaign you can go to https://www.connor4pgh.com/donate – any amount helps! Or, if you’re as excited as we are to work toward a new Pittsburgh you can sign up to volunteer at https://www.connor4pgh.com/get-involved !

Q&A With Ed Gainey, Candidate for Mayor City of Pittsburgh