Take a look at what happened when they rolled this dynamic duo out in Florida.

“I know what my father believes in,” she said during the event. “Prior to politics, he supported gays, lesbians, the LGBQIA+ community.” (She misstated the initialism — removing the “T” that stands for the transgender community.)

Richard Grenell is brought to us by CMU who hired him earlier this year to bolster their sterling credentials as a bastion of free speech and coffers that need to be filled by White Nationalist donors to support their war machine. The Pgh City Paper has more.

After the Florida Fiasco, GLAAD put together a list to remind us of the many ways Trump has failed LGBTQ folx.

(Here’s your reminder that the Trump Administration hasn’t been a friend to LGBTQ people)https://t.co/PSdHc7RUll

This is where you might be thinking that you can “TikTok” some extra tickets, but when you text this number – it takes you to a public facing Trump event in Butler County. Now Log Cabin Republican’s finest Casey Flores is on to my attempts to get information – I really need a burner phone – so I may or may not get the final details on the Pride event. The latest update is that you have to DM Casey to get tickets precisely because the TikTok generation derailed automatic ticketing tools.

Now Casey seems to be one of those white gay cisgender men who is fueled by outraging people. The guy who smirks because he’s sure he’s the smartest one in the room and is friends with all the power gays in spite of his racist politics. He is witty and enjoys the clashes. This post will fuel his ego, but he will downplay my credibility or impact. He wants to chat respectfully while he’s aggressively trying to strip me of my rights to a secure and safe future.

Where has Pittsburgh’s queer community seen someone like that before?

The City Paper did cover this display of faux-allyship

The Trump administration has already targeted LGBTQ rights, most notably banning transgender people from serving in the military. In June, the Human Rights Campaign, the country’s largest pro-LGBTQ organization, listed a number of ways the Trump administration has undermined LGBTQ rights, including not supporting or reversing legislation meant to protect LGBTQ people, not only in the military but in the workplace, schools, and housing.

This is in addition to nominating what many view as anti-LGBTQ judges to the Supreme Court, refusing to grant visas for same-sex partners of diplomats and U.N. workers, and allowing adoption and foster care agencies to discriminate against LGBTQ people.

Flores cites a 1973 comment by Biden to support ridiculous claims that he is not as strong an ally as Trump. I was three years old when he made those comments. I’m pretty sure we both grew in the years since.

Take a closer look at the City Paper article which features our friend and occasional collaborator Duane Naheen Binion speaking powerfully about the consequences of this election for Black Americans, particularly BIPOC queer and trans folks.

This rally is not about gaining more support from LGBTQ folks, it is an illusion to highlight Trump as a LGBTQ ally. Are there Trump supporting LGBTQ folks? I think there are, actually I know there are and I suspect most of them are affluent white gay men, lesbians, and trans folks. They are a clear minority within our community, but like most Trumpies – they control a lot of resources. And they play these type of shell games. People who think it matters what Tiffany Trump thinks. It doesn’t. She’s a private citizen being used as a puppet. But she’s making her own choices.

I debated ignoring this taunt, but I’ve run into too many pro-Trumps gays on social media who play these headgames. They are not good people. And we will have to contend with them after election day as they pursue new avenues of power and access, likely with other Republicans. I could care less how popular or friendly Casey Flores is, but I do care that you my readers understand that they are trying to play us to turn out last minute voters. I’d rather he spend a few tweets mocking me or trying to bait me if it keeps his attention from his actual agenda.

Rather than bringing hate, I want to bring truth. 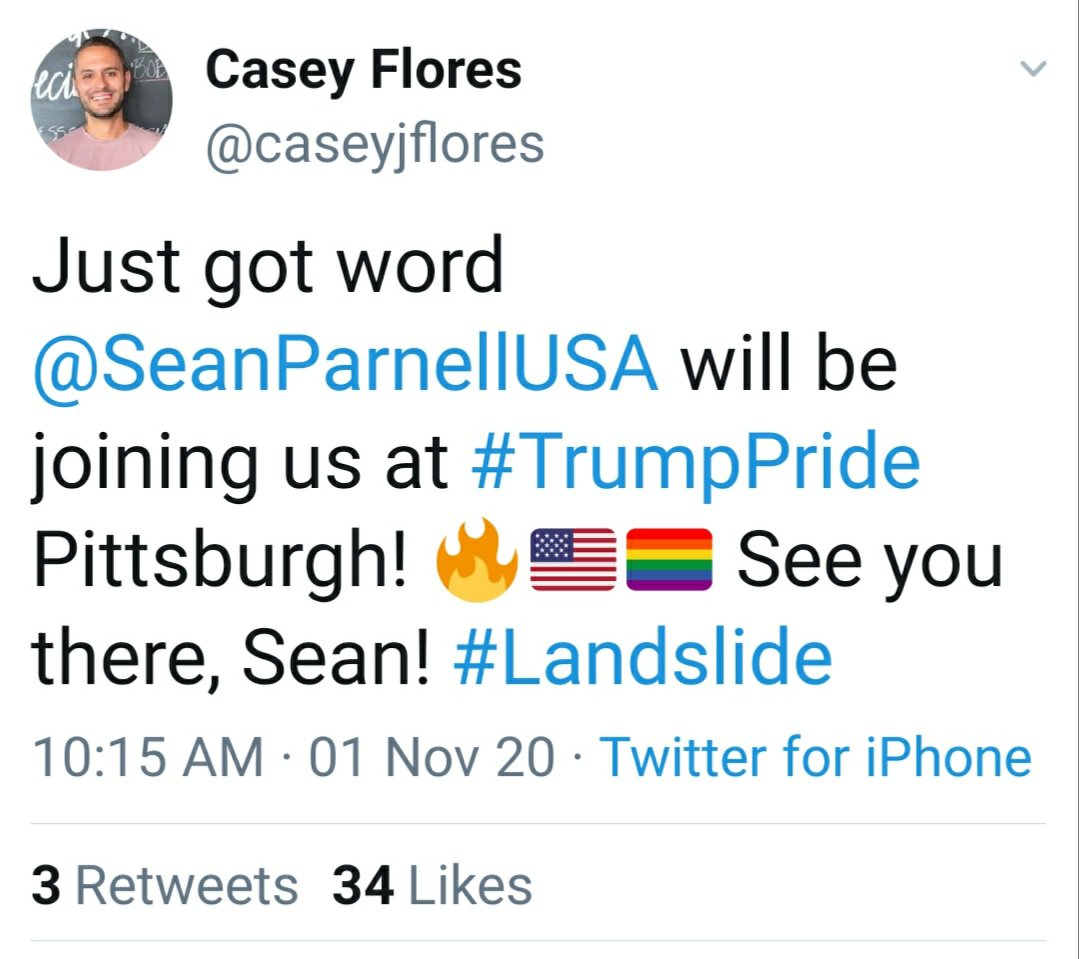 UPDATE: Per these screenshots, this event is scheduled for Domenico’s Ristorante in Cranberry Township.  Back in 2012, they caught some hell for a series of nasty signs put up by the owner, Michael Pollice, including one that read ‘God Hates Flags‘ 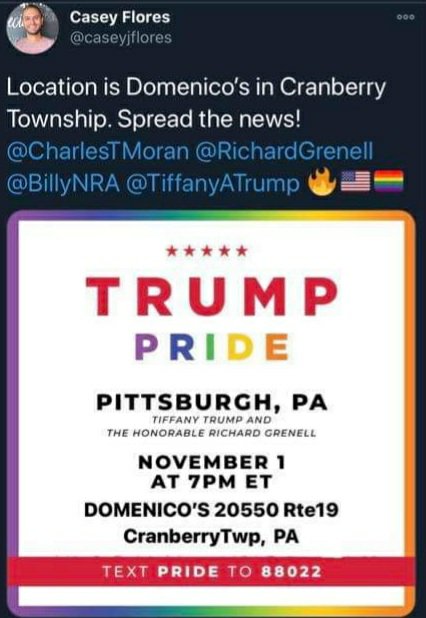 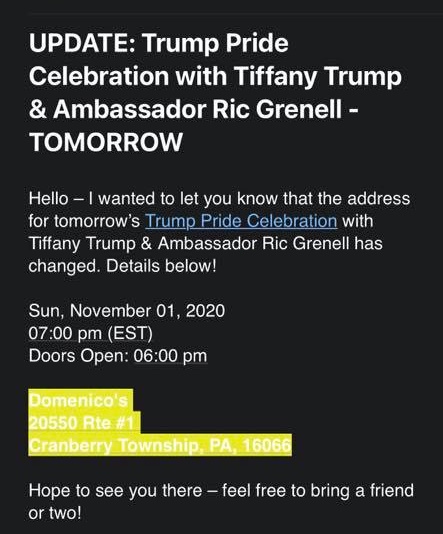