After genuinely worrying about the potential to put a Christian pastor with a disturbing history into the role of President of Pittsburgh City Council, I am truly relieved even buoyed to share that they unanimously chose Theresa Kail-Smith

“I think that we wanted to make sure our council was unified and working together,” she said. “Hopefully my colleagues feel that I’ll be able to do that.”

I had a sneaking suspicion she was the only viable compromise candidate. Fortunately, she’s also qualified and experienced, qualities the Ravenstahl ascendency to the Mayor’s office in 2006 should ALWAYS keep in our collective mind.

Aside to those who think I mistakenly conflated Catholicism, Mike Pence, Protestantism, and other Christians, including Ricky Burgess, in my original post – nope. They are all part of the same shrub, especially in Pittsburgh. That sort of false distinction is EXACTLY why we need a very firm boundary between Church and State in all levels of government. Informed people of faith understand what I’m saying.

The ongoing trauma of surviving abuse in the Diocese of Pittsburgh 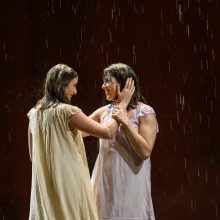 Review: Indecent at the Pittsburgh Public Theater is Mesmerizing