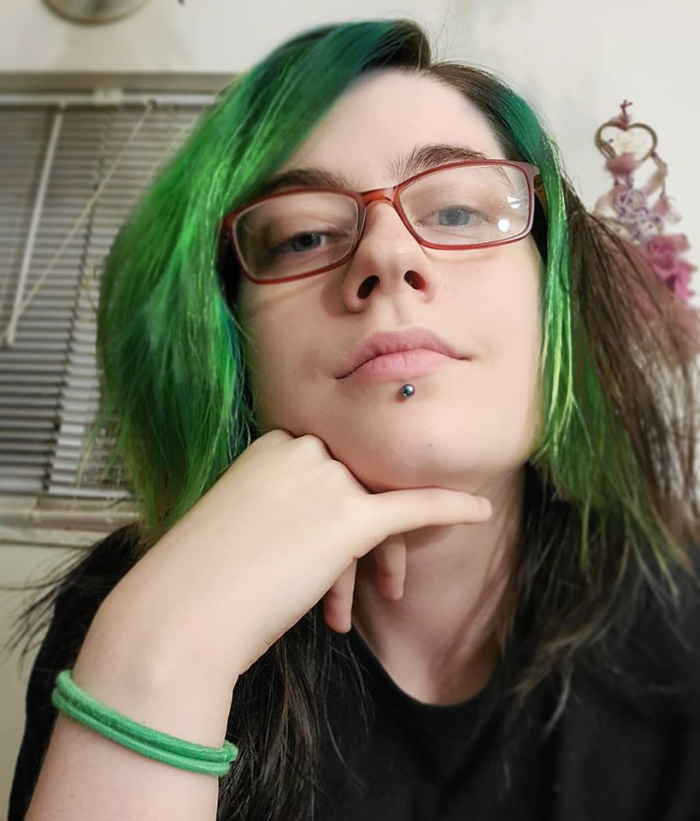 How do you describe your identity? DeafAutistic, androgyne, bisexual, 2D animator/illustrator.

Please describe your coming out experience. Where did you find support? What challenges did you face? I came out as bisexual when I was around maybe 12 years old, I remember asking my mother what she thought about one of my female friend having a girlfriend, and she figured it out right here and accepted me.

For being an androgyne, I struggled on this for a very long time, starting at around the same age. I remember I created alter-ego character that represented myself, where one is female and the other one is male. At first I said I’m genderfluid, but that didn’t feel right since I didn’t exactly swing around different gender. After time and research, I discovered this word, “androgynous” and I say that my gender identity was androgynous. (English isn’t exactly my first language.) After someone correcting me on my grammar, I learned it can be used as an identity so I announced that I’m an androgyne instead.

I did experience occasional invalidation from people who are not educated on what bisexual mean, and the constant erasure of both bisexual and androgyne identities. I’m trying to be patient and informative if needed.

How would you describe yourself NOW in terms of “being out”? I’d like to think that my friends accept me!

Tell me about the first LGBTQ person whom you met. What impact did they have on your life? At young age around 9 or younger, my aunt’s friend stopped by to chill for a bit, and my mom informed me that he is gay. I didn’t know what gay meant, so then she explained to me that it means he is a man that loves other man. I learned something new and that people like him exists.

Past or present, favorite LGBTQ character or creator in television, film or literature? Please tell us why. In the past, I remember how I always loved Garbage’s music and some of them are pretty LGBT-friendly now that I look back on this.

Currently, I’m in love with Karolina and Nico on Marvel’s Runaways!

How do you stay informed about LGBTQ issues? The social media, pretty much!

Describe your geographical community. In the place where I grew up, it was a small town and people over there are extremely judgmental. If you don’t fit in a certain mold of how “normal” people should look, be, and act, then you’re likely in danger. If I had not moved out of that town, I’ll probably be dead because of who I am, specifically for being Deaf, awkward and queer.

Describe your local or regional LGBTQ community. Being Deaf, I do not get much information by ears, but, I remember seeing a LOT of LGBTQ+ stickers, posters, and booklets in stores, especially Lawrenceville area. I’d like to think that Pittsburgh strongly welcomes LGBTQ.

Outside of western Pennsylvania, I’m part of the Deaf LGBTQ community and I get a lot of information from Deaf Queer Resource Center online.

Have you ever experienced discrimination based on your identity? Specifically, in a job setting, when applying for housing or while in public.  Never with LGBTQ+ identity, but I’m more likely to experience discrimination based on my deafness than anything else, unfortunately, I know that stands out the most and that make people get unnecessarily worried to the point where they doesn’t give me a chance.

Have you experienced microagressions based on your identity? Think everyday indignities & slights that you experience, but would not characterize as discrimination. Please describe in your own words. Absolutely, yes, daily. I live, sleep, and breath into that by living in this society that doesn’t speak ASL. Other than that, I’ve dealt with an occasional unicorn-hunters due to my bisexuality.

Tell us about your access to health care in Western PA. Has it been LGBTQ competent (or not?) I’ve noticed there are resources here in Pittsburgh as well as with an organization. Being someone that grew up from a small town, this is a huge good thing in comparison.

Are there issues impacting your LGBTQ neighbors that aren’t visible or part of the local dialogue?  To be honest, I am out of the loop.

What would you like to see elected officials do to improve life for LGBTQ Pennsylvanians? I would like to see an entire Pennsylvania to have protection from gender identity and sexual orientation discrimination instead of Pittsburgh, Erie, and few random small section of this state.

Please share a lived experience, anecdote or fact about life as an LGBTQ person in your community. Like with hearing world counterpart, I had to deal with homophobic Deaf people attacking me in ASL. The worst part about being part of the Deaf community is that social media like Facebook doesn’t punish those people because they spoke ASL in video instead of being caught by text or voice recognition. They can get away with the worst thing they say. Do you expect anyone who handle report to know ASL?

Beyond discrimination, what other barriers create challenges for your LGBTQ neighbors? The lack of Deaf-friendly resources, that’s for sure.

What LGBTQ friendly resources are available for your neighbors? Not physically neighbors, but, in-community-wise, these are some of the resources that I follow.

What is your greatest fear for the LGBTQ community in Western Pennsylvania?  I fear that Pittsburgh is probably the only “safe” place for people to be boldly queer, I can not imagine anywhere outside of this place to have the same safety. I fear that it will never change for other.

What is your greatest hope for the LGBTQ community in Western Pennsylvania? I really hope that we get bills to protect us, and that we can be more comfortable about who we are.


What pieces of local or regional LGBTQ history would you like to preserve and why? I really liked Cruze Bar only because it’s at least more accessible than most other gay bars being that they provided ASL interpreter, but now it’s closed down.

What can allies do to support your LGBTQ community? Be ready to learn from us, unpack any harmful behavior, and stand up for us when you see anything wrong. Try to educate other ignorant people if it is possible and appropriate.

How can gay men and lesbians support the bisexual, transgender and queer members of our community? Address and acknowledge the issue with erasure, homophobia, figure out how to change their unwelcoming space, and consult with us with an open mind would be awesome too.

What motivated you to take part in this project? I enjoy reading some articles and I figure I should take part of this project especially being that I have Deaf perspective and I don’t think anyone else had done this before.

Finally, what question should I have asked? Please also share your answer. On the scale of 0 to 10, how welcomed do you feel in the LGBTQ+ community? If possible, explain why you chose this answer.
Answer: 8. Two numbers lower because of the erasure and lack of acknowledge on my identities. Although on the major part of LGBTQ+ community isn’t accessible, they are still awesome for blowing kiss gesture at me when they misunderstood my sign for “Thank you” (They look similar. I’ve made a webcomic about it.)