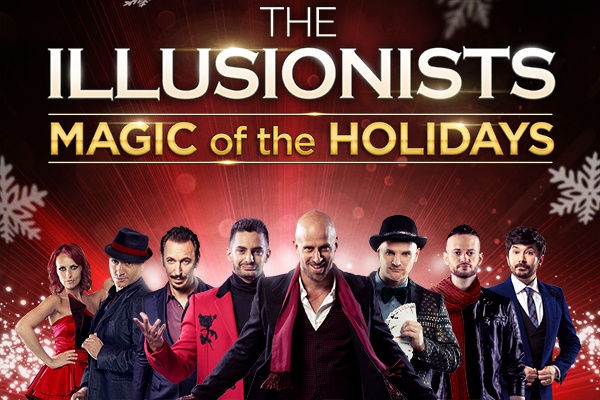 The holidays occasionally put us in proximity to family members & traditions that induce winces, full-fledged eye rolls, and even brawls over old wounds and new politics.

The Illusionists ‘Magic of the Holidays’ show lands neatly into that category – it is very much your father’s and grandfather’s magic show. There’s a lot to appreciate, but too much to ignore for this to be a truly joyful experience.

The dazzling sleight of hand to the mind-boggling feats are genuinly entertaining and mesmerizing. But there are simply too many Dad jokes, winks and nods, casual sexism, and alcohol for a major performance in 2019. This is the show you’d expect at a local lodge or running on a VHS tape in the basement to keep the kids amused and out of your hair. Casual sexism and all.

The show features eight central performers in seven different acts, each on stage several times in a dizzying and spectacular array of stage and costume changes. It fits right in with the lush early 20th century and Old World beautify of Heinz Hall. I did find myself enjoying the banter, the build-up, and the genuinely stunning tricks. And to their credit (and mind), I was distracted enough to enjoy the show without trying too hard to figure out the tricks or predict the outcome.

The cast is billed as “always changing” for the duration of the tour. Still, it’s a very white group they sent to Pittsburgh – ooofff. The performers appear to be white, the audience members called on-stage were white. In an era filled with ‘Black Girl Magic’ it feels almost startling to be transported to a time when white cisgender men of European descent control the illusions.

We both wonder – where are the magicians of color? The women illusionists? The magicians who aren’t buff or built or skinny? Maybe I’ve been spoiled by the many burlesque shows I’ve attended in Pittsburgh, but I’m used to performers who look more like me than not. I’m used to bodies and performances that lean into the experience of being magical in today’s world, not lean back into an age when magician meant white cisgender dude.

Consider this. The mesmerizing Transformationalists are a quick costume change show. It is spectacular and anyone who has hurriedly tried to dress or undress can appreciate the skills. So how disappointing that the programs reads

“Their breathtaking act is every woman’s ultimate dream come tree: being able to change effortlessly into one glamorous outfit after another at impossibly fast speed!”

What? Not only is this a ridiculously sexist assumption, it reduces the ONLY WOMAN headliner to a fantasy rather than elevating her artistry and skill the same way they do for the male performers.

The thing that really dismayed me was the tired trope of a ‘man in wig’ pretending to pretend to be a woman. This was during the end of a contortionist segment, challenging us to understand how a lovely blond woman managed to be disappeared by the white male magician. Was it mirrors? Trick doors? Did she have a twin? Guess who the ‘twin’ turned out to be – the jokester male magician in a blond wig.

It’s 2019, folks. Transphobic jokes aren’t funny. Does that really need to be spelled out? Obviously, so. Also, stop making jokes about #MeToo. Again, not funny.

Punch up, gentlemen. There is plenty of material and plenty of talented performers among your ranks.

The illusions were interesting. I took the approach of sitting back to be entertained, not trying to figure out the trick. I gasped, held my breath, hid my face in my hands, averted my eyes, and stared transfixed at the stage. It seemed they created this show for someone whom I used to be – a white cisgender suburban moderate who misses when Tim Allen ruled the television networks.

As cool as the tricks are, I can’t suggest you see this show as it continues its tour and I definitely don’t think you should take your kids – they deserve better than casual sexism and transphobia in their cultural and entertainment experiences.

We need to make sure the Cultural Trust understands that we expect better from their programming. To be completely transparent, I did receive media passes to review this show. They know I don’t hold back. It is exhausting to see how resistant so many cultural events are to basic concepts like ‘don’t make jokes about the oppressed’ or ‘give people a head’s up about difficult content’ and claim this is part of the freedom of artistic expression. Debasing trans women is not artistic expression. Assuming everyone thinks sexual harassment is funny is not artistic expression.