If I had more folks that look like me out and in positions of power when I was younger, I truly think I would have come out to others, and myself years earlier than I did. It means so damn much. More LGBTQ folks in office means visibility of what it can look like to be queer, that we can elevate and take positions of power, and use that power to make our corner of the world a little more just. – Jessica Semler

This is Jessica Semler, my colleague at The Pittsburgh Current and an openly bisexual woman who will be joining the Etna Borough Council. Scroll down to read all posts in this series.

Your Pronouns: she, her, hers

How do you describe your identity? Queer/bisexual woman.

You recently won election to Etna Borough Council Tell us about your district and the communities you will represent. The borough of Etna spans an 1/8 of a mile and is broken into 3 wards. I was elected as councilwoman to the 3rd ward of Etna. We have less than 1,000 folks in my ward, and I’m excited to represent my neighbors and friends.

Please tell me about your familiarity with the LGBTQ community in your district, the public schools, and the region. I’ve been an activist for reproductive rights in Pittsburgh for years, and that is of course intertwined with LGBTQ rights; access, education, creating safe spaces, and advocating for legislation on various levels. I love how vibrant our queer community is, and I was really excited to enlist a queer owned business to make my campaign shirts and buttons. The fine folks of Etna Print Circus are my neighbors, so I was able to put my campaign cash back into my ward, and also support a small, queer business!

Based on this, what do you understand to be our top LGBTQ concerns and priorities for your office? How will you respond to those priorities? Access to affordable housing, jobs, and quality, nonjudgmental healthcare are primary concerns, because LGBTQ folks are more likely to be at risk for discrimination. This is even more true for LGBTQ people of color, especially our trans siblings.

In terms of addressing these issues from my position as a borough council person, that looks like looking at issues and initiatives through a lens of equity, especially when it comes to making decisions around burgeoning development. I plan to work with surrounding boroughs to pass an LGBTQ Protection Ordinance, especially since this hasn’t happened yet on the federal and state level. Democrats in the house have tried to pass this for years, but unfortunately as long as Republicans have control of the house, the PA Fairness Act hasn’t moved close to a real vote. Since the state has been dragging their feet on this, it’s imperative for municipalities to take a stand. 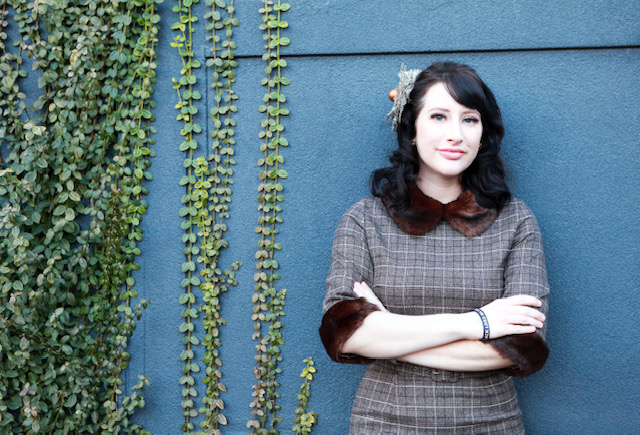 Why did you decide to run for this office? I never thought I personally would run for office for a variety of reasons; I’m bisexual, high femme presenting (almost always does with flowers or a fascinator in my hair), and I’m very outspoken. I’ve shared personal stories about sexual assault, and an abortion because I believe the power of storytelling is transformative and smashing stigma is important. For all of these reasons, I saw myself more permanently in issue based advocacy and activism, or just electorally supporting other candidates.

I decided to run because I saw an opportunity, and I realized that if I could run and win, even in my tiny borough, I could chip away at the idea of what a candidate and political official looks like. I want more people like me making decisions. We need queer folks in office. We need more women in office. We need people with a diversity of experiences in office. We need someone like YOU in office. How could I tell other folks that they needed to run if I wouldn’t do it myself?

Tell me about your endorsements and supporters. I applied for and received two endorsements: The PA Young Democrats, and The Victory Fund. I was previously Public Affairs Director for Planned Parenthood of Western PA, and President of the Young Dems of Allegheny County, so a lot of my supporters and donors knew me from my previous work with those organizations. I attend the Etna council meetings and other community meetings regularly, so I also had support from my neighbors and folks in my community.

What are your top legislative priorities for your first months in office? Definitely meeting with folks in other municipalities to learn how to effectively make ordinances that are impactful. Etna is the world’s first official EcoDistrict, so I’m excited to work with council and the rest of the community to continue work that includes intentional development, supporting local businesses, and addressing ongoing issues like flood mitigation.

I’m also attending Local Government Academy to learn about ALL things municipal government, so I’ll be learning a lot!

How did your identity as an openly LGBTQ person impact and inform your campaign? How will it impact and inform your tenure in office? The Victory Fund endorsement meant so much to me because I often feel queer erasure from me being femme presenting, and in a straight passing relationship. This is part of my identity, and part of why I ran, so I was glad to have that endorsement from and center.

How does intersectionality inform your work? “My feminism will be intersectional or it will be bullshit.” This quote from Flavia Dzodan informs my work and outlook. Having worked in the reproductive rights field, it was imperative to listen to and follow the work of women of color like bell hooks, Monica Simpson and Loretta Ross from SisterSong, the group that coined the term “reproductive justice.” You can’t achieve equity or address issues if you aren’t able to see the intersections of people’s identities and oppressions. As a white cis straight-passing woman, I try to be mindful, try to take in call outs gracefully, and I’m always learning.

I plan to work with surrounding boroughs to pass an LGBTQ Protection Ordinance, especially since this hasn’t happened yet on the federal and state level.

The threats of ‘religious liberty’ laws and exemptions target both LGBTQ rights and women’s rights. How do municipal councils navigate personal religious freedom while resisting systemic oppression and control of underserved people? A person’s religious freedom ends when it begins to denigrate someone else’s personhood. I think the cries of “religious freedom” are typically an intellectually lazy reason to defend one’s bigotry. Calling out this hypocrisy when we see it is important.

How does open and visible representation of different LGBTQ identities in elected office change the world?  If I had more folks that look like me out and in positions of power when I was younger, I truly think I would have come out to others, and myself years earlier than I did. It means so damn much. More LGBTQ folks in office means visibility of what it can look like to be queer, that we can elevate and take positions of power, and use that power to make our corner of the world a little more just.

Please tell us about your very first impression of Pittsburgh: I moved back to Pittsburgh from Colorado after the 2012 Obama campaign. My dad has Alzheimer’s and it was getting worse. I wanted to be around while my dad still knew who I was. While I initially came back to Pittsburgh begrudgingly, thinking this wasn’t the space for me, I found my people and my purpose. There is so much work to be done in Pittsburgh, and I’m grateful I came back.

What Pittsburghers have influenced your life and work? I have to say Mr. Rogers. And probably Anti-Flag.

Please tell us about the first LGBTQ person that you knew and what impact they had on your life. My best friend when I was growing up, when we were about 10 years old her single mom had a “friend” move in. Her two moms were basically parents to me as well, and I remember feeling like their house was this wonderful, matriarchal sanctuary.

What is your message to the LGBTQ youth who may not realize that people like them hold elected office?  In so many ways, things seem so fucked up right now, and there’s no denying that. But there are older people like you that are fighting, trying to make it better, and being unapologetically out and proud, despite all of it. We can’t wait to pass the torch to you.