The Prompt – What are the names of the bridge and tunnel closest to your childhood home? What about now?

I’m tickled by how hard these prompts can be even though I created them.

I grew up in West Mifflin, minutes from Century III Mall – literally. I had to use Google maps to determine which bridge is closest to my childhood home and I’m unsure if I got it right.

These are the closest bridges and the ones we used most frequently.  Note that there are dozens of very small bridges that don’t have actual names, but traversed over creeks and valleys along some of the major roads we traveled.

Clairton-Glassport Bridge (4.3 miles)  – we didn’t “go this way” very often, but the bridge led from our part of West Mifflin to Glassport and nearby communities. If there was a road blockage on our usual route to Clairton or Elizabeth, we would sometimes take this road. I don’t have any real impression of this bridge.

Mansfield Bridge (4.8 miles or 5.4 miles depending on the route we choose) – our major artery to McKeesport and all points East. I probably crossed this bridge 3-4 times week on average. The most memorable bit is the need to be sure you are in the proper lane coming off the bridge as there was no way to correct your direction before you were suddenly in a one-way-only lane leading either to McKeesport or Glasspost. It was a PITA to turn around.

Glenwood Bridge (4.9 miles) – we crossed this bridge to get to Downtown Pittsburgh and my father used it to go to work when he was based at the Hazelwood steelmill. This bridge connects Route 885, a major West Mifflin artery to Hazelwood. For years, I thought it was the way to get to Pittsburgh’s Downtown.

Homestead Grays Bridge (6.7 miles) – we used this bridge less frequently, but it was our pathway to Squirrel Hill and the East End of Pittsburgh.

Elizabeth Bridge (7.2 miles) – I hated this bridge. For some reason, I had the impression that my father had been involved in a car accident on this bridge when he was a youth, but there’s no actual memory of that story. We crossed this bridge a lot to go grocery shopping, to go to the dump, to go to all sorts of places that I cannot remember. I don’t really know why we spent so much time in these neighborhoods.

There’s a section of Route 51 North coming off the bridge from Elizabeth into the municipality of Large, PA that swoops wide to the right and gives you a chance to really accelerate. When I was 18, I remember my friend Rob driving very fast along that section while the song Fast Car was on the radio and I closed my eyes to imagine us flying away from the acceleration. 30 years later, that memory is still very vivid. It is bridge-adjacent so I’m sharing here.

I had a love/hate relationship with bridges. They were everywhere, but some were more frightening than others. There was one little black bridge in Baldwin near old Route 51 and St. Elizabeth Church, near the intersection with Streets Run Road. My father used to take us across sometimes and I was terrified. It was wood and steel and rattled and the floor was wooden. I hated it and begged him to take the more congested route. Sometimes he listened and sometimes he took this shortcut. He grew up not far away so it was part of his lifelong journeys.

There are so many tunnels near West Mifflin that I could take hours to find the closest – tunnels under bridges, through hillsides, viaducts, etc. Nothing as fancy as the Ft. Pitt Tunnels or so forth.

Now, I live in the shadow of the West End Bridge. In photos, it looks like it runs right into our backyard. The closest tunnel would be the Ft. Pitt Tunnels, I believe. 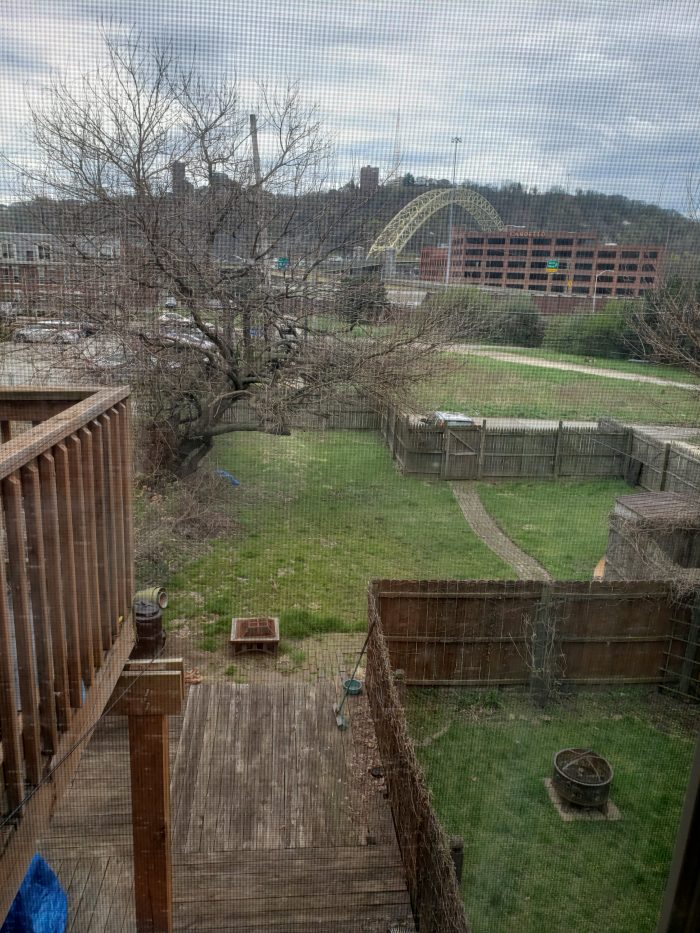