County of Residence: Allegheny County, also has lived in Hawaii

How do you describe your identity? genderfluid/agender, gay/queer, western european roots, over seven generations in North America, ecosexual, priestess, prophet

Please describe your coming out experience. Where did you find support? What challenges did you face?  Some people say coming out is a constant process. for myself I have found that to be true, especially with my family; for example, communicating with my dad about his expectations of me and who i am versus my actual preferences and tendencies of being. I have discovered that through a really dark period of my earlier years, I came to recognize how much of me was in the closet, and that’s where I learned the most.

How would you describe yourself NOW in terms of “being out”? i would say that the closet or a personal private place of intentional retreat is something that continues on in my personal life, and does not end where i come out or do anything at all. in fact i think that our culture currently places a lot of oomf on the idea of coming out, but in reality i think what is of utmost importance for me is the actual time and place experience of transformation. it’s not about other people. at the same time, i don’t want to completely “withdraw” into my hermit crab shell ALL the time. it’s a balance.

i don’t really think that it’s anyone else’s business – it’s about being out to me, being out to myself. now i won’t hide it if i sense attraction to someone, or if my gender fluidity is called into question or something – i very much defend myself if people make the mistake of attempting to invalidate me in any way. i’ve been through some major stuff that isn’t for this form, but it has deeply informed the way in which i feel the importance of self-love and self-care.


Tell me about the first LGBTQ person whom you met. What impact did they have on your life? Possibly may have been my 6th grade gym teacher. She was a tiny crack in the defense wall of gay-fear and gay-hate that I had built around my heart in 4th grade when I had been incorrectly informed of homosexuality’s supposed status as a sin in Christianity. Which I really didn’t understand – but at the time I was 10 years old and Terrified of burning in hell…
So my 6th grade gym teacher unknowingly began to destroy that idea that gay people, gay women in particular, were conspirators in some evil plan.

Past or present, favorite LGBTQ character or creator in television, film or literature? Please tell us why. I really admire Hayley Kiyoko, a lot because she reminds me of herself. The woman holds it down, and she does it with mastery and impeccability, whilst giving love to those around her who work with her. She is a role model to me as a creative professional, a director of anything I’m directing, and as a queer woman using her superwoman powers :)o(:

How do you stay informed about LGBTQ issues? I use social media, especially youtube and other online resources

Describe your geographical community. Yes as far as I have seen it is

Describe your local or regional LGBTQ community. I have lesbian couples as neighbors, and there is a lesbian couple who owns and runs a coffee shop in my immediate neighborhood. There used to be a really kind gay couple who lived on my street, one of the men owned the large house they lived in that is sectioned on into apartments.
In my city I see a lot of genderfluid younger people like myself, and I see a lot of us being creative in ways that would and do go unnoticed by commercial capitalism.

For example Randy who created Randyland, and if you don’t know what Randyland is then now you can find out. Randy is super loving and his partner died last year.

Mixtape in Garfield is a cool place to go for queer women, especially younger ones who feel like the bar scene is not really vibing with them.

Have you ever experienced discrimination based on your identity? Specifically, in a job setting, when applying for housing or while in public.  No.

Have you experienced microagressions based on your identity? Think everyday indignities & slights that you experience, but would not characterize as discrimination. Please describe in your own words. N/A

Tell us about your access to health care in Western PA. Has it been LGBTQ competent (or not?) Yes

Are there issues impacting your LGBTQ neighbors that aren’t visible or part of the local dialogue? well i honestly think that one of the issues affecting my LGBTQ neighbors is actually affecting everyone but that is the air quality problems from toxic chemical plants. but more specifically is the religious insistence of accepting this so-called Biblical notion that homosexuality is a sin – this may or may not be visible but it’s glaringly obvious that it’s causing harm to teach this.

She was a tiny crack in the defense wall of gay-fear and gay-hate that I had built around my heart in 4th grade when I had been incorrectly informed of homosexuality’s supposed status as a sin in Christianity. Which I really didn’t understand – but at the time I was 10 years old and Terrified of burning in hell…

What would you like to see elected officials do to improve life for LGBTQ Pennsylvanians? Remove all attempts to control, define and decide the rights of LGBTQ members of our society. Human rights are human rights.

Please share a lived experience, anecdote or fact about life as an LGBTQ person in your community. there does exist an intersection between gay and trans identity, and for all my life i have walked it. i also walked in the identity of bisexual when i first came out to myself as a teenager, but knew that my gender was not all on the side of she so i knew that the person i had been conditioned to be, wasn’t me at all.

it took me a whole lotta healing and saying fuck the world completely, to retrace back to my heart, that i had locked in a closet. it sure is poetic, but it makes complete sense now for me to recapitulate often.

Beyond discrimination, what other barriers create challenges for your LGBTQ neighbors? Doctors may not acknowledge someone’s request to be prescribed a hormone that would alter their brain’s chemistry – they should – would say that is one of the things is that people would really benefit from having their right to self-augment completely honored – it is a human right as well.

What LGBTQ friendly resources are available for your neighbors?  Central Outreach wellness center – they treat people who come in who are hiv positive in addition to offering prescriptions for HRT with no psychiatric evaluation. go them, for real.

What is your greatest fear for the LGBTQ community in Western Pennsylvania?  That it doesn’t exist

What is your greatest hope for the LGBTQ community in Western Pennsylvania? That we can remind ourselves that we do have a community and it is there for support and for real life in person, not just online


What pieces of local or regional LGBTQ history would you like to preserve and why? Randyland – Randy is an artist. He bought a house on a credit card while working a waitor’s job and making a waitor’s wage and he transformed not only his home into a continually evolving living loving piece of artwork, but he also revived the land and built beautiful gardens for a once-blighted neighborhood. He continues to work a waitor’s job, and his lifelong partner passed on to the other side last year. My heart still goes out to Randy, who I’m sure is still missing him.

What can allies do to support your LGBTQ community? Dynamic unified collective active resistance to capitalism’s controls on our humanity, empathy, and compassion.

How can gay men and lesbians support the bisexual, transgender and queer members of our community? Well. What other humans can recognize is that in every way we show up in the world, we are making a deliberate act to define ourselves. And that is powerful and worth respecting because no matter if you are the same as another person, they are equal to you in terms of being worthy of respect.

What motivated you to take part in this project? I feel strongly convicted to let my voice be heard, to uplift mine and others voices .

Finally, what question should I have asked? Please also share your answer. Well for me I might want to be asked, What is one frame or snapshot from your experience of being in the in-betweens of trans and queer?
I have a big mind. My body is sensitive. Between or maybe with the two of them, I find the place where my reality unfolds, experience of life begins. I wasn’t taught that this was a way to exist in this world but I always knew I was rad, and I always knew who I really am. Transformation is key, and Transition is something that’s happening for me on multiple levels on a regular basis, more than just about gender. I really tend to almost think of myself as agender these days, because gender really isn’t part of anything, if i don’t want it to be. 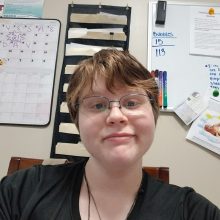