My brief series with ‘Burgh Vivant, Seven with Sue, has been modified to publish right here on my own blog. We will use a simplified version of our popular Q&A’s to talk with an assortment of regional folx.
Each edition will ask several questions (plus demographics) exploring the creator’s experience and views on all things arts and culture in Pittsburgh. 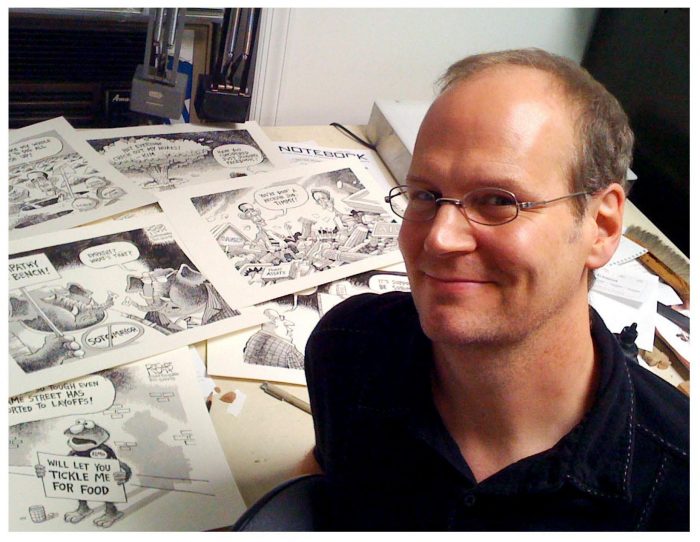 Cartoonist Rob Rogers has brought back his beloved Brewed on Grant cartoon series with his publication partner, The Pittsburgh Current. He’s lent his fame and infamy to a Kickstarter project that will subsidize other local cartoons in the print edition – genuine Pittsburgh funny pages in a Pittsburgh newspaper. Rob is also an established international political editorial cartoonist.

Pronouns: he, him, his

Your Affiliation(s): Freelance, syndicated by Andrews McMeel Syndication, featured in The Pittsburgh Current

How do you describe your identity? Aside from the immediate familial identifiers like husband, brother and son, I think of myself as a cartoonist, a political satirist, a progressive, and on rare occasions, a musician. But I would be lying if I also didn’t recognize that I am a white male who benefits every day from white privilege. I don’t like having to face that part of my identity but by doing so it helps me to better understand what others (not white men) have had to endure and it gives me more empathy and grounding for my work.

Describe an underappreciated or underutilized cultural resource in this region. Cartoonists. This region has a surprising number of gifted cartoonists and illustrators. There really are not enough venues to support all the great talent we have here in the city and beyond. The fact that we no longer have a daily newspaper is incredibly sad. The lack of publications with the funding to support local journalism in the form of local cartooning makes me very sad. But that’s also why I am excited by the prospect of helping to bring more local cartoons to the Pittsburgh Current.

If you were not a political cartoonist, what other artistic expression would you pursue? I love to play guitar and I even write my own songs from time to time. I suppose if I had the time I would focus on music more, maybe even seeing if I could write protest songs like Woody Guthrie or Pete Seeger. But mine would be funny protest songs.

I found a 1898 Pittsburgh Press newspaper caricature of my 3x great aunt Mary Campbell McCafferty (1857-1910) in a court article describing her prosecution for a rowdy drinking party in her ‘Disorderly House’ on Basin Alley in 1898. Basin Alley was part of the Lower Hill and home to shifting waves of immigrants in that era. Beyond the personal connection for me, how does a cartoon like this from 120 years ago help us today understand our world? Bonus: And why does it matter that it was in a newspaper in the first place? The Pittsburgh Press (Pittsburgh, Pennsylvania) 01 Aug 1898, Mon • Page 6 First of all, congrats on having a 3x great aunt who knew how to have a good time! I have not seen the cartoon itself, but it sounds like it illustrates the complicated issue of immigration in America. It also reinforces the importance of local cartoons to capture a moment in time, whether good or bad. Pittsburgh Is in the news now because the mayor has publicly said he wants to make it a sanctuary city. We have a president who wants to punish sanctuary cities. Immigration has always been an important and defining issue in this country. It is vital to remember that as we move forward.
I like that it was in the Pittsburgh Press because that’s where I got my start as an editorial cartoonist.

How do the arts contribute to a most livable city? The arts are an important component for any city because it feeds the soul. People need to be reminded of their humanity and the best way to do that is through the arts.

Why are you are reviving your “Brewed on Grant” strip with a new publication partner, The Pittsburgh Current? The importance local journalism cannot be underestimated. Local cartooning is an important part of that mission. It is essential in a democracy to keep local government and local politicians in check. Without local coverage there is no watchdog. Brewed On Grant is one small way to do that.

Tom Hanks is Mr. Rogers. Whom would you cast in the Rob Rogers biopic? Rob Corddry

Where can readers find you and/or your organization on social media?
www.robrogers.com
https://www.patreon.com/robrogers
Twitter: Rob_Rogers
Thank you, Rob.

Invest in local blogging that connects you with the