As part of ever-expanding quest to create chaos and drama for ourselves, we are trying to trap a very certain cat this weekend – the ‘mama’ of our five kitten caboodle foster kitties. We’ve dubbed her Jennie Jane and it appears she is pregnant again. We’ve been trying to trap her for months with little success. She’s savvy and we’ve been a little less vigilant about it due to competing demands on our time.

So we set up the two ‘have-a-heart’ box traps on our back deck. Wednesday and Thursday, we tied them up so they wouldn’t spring if a cat entered and proceeded to put very tasty food inside so the cat would get used to eating out of the trap. This seemed to work fine.

Quick Word – if you find this informative, entertaining, interesting, or even just mildly distracting, please consider supporting your neighbors who are feeding and caring for homeless cats every day. Some colonies are small like ours while others, especially in rural areas, can number 25 or more. Your donations of cat food will help these caretakers who pay for all this food out of their own pockets Thank you.

Jennie Jane – female, pregnant, mother of our #kittencaboodle, trap savvy, has lived around our house for months
Mx. Pajamas – short haired black kitty of undetermined gender. tipped ear means they have been altered. hangs around a lot. doesn’t run when we are around, but won’t let us get too near. has cut over his ear that we’d like to get him into a vet to see about treating. Enjoys taunting our chihuahua who won’t walk anywhere near him.
Oxsana – white and gray kitty of undetermined gender, tipped ear. very, very sweet and friendly, lets me pet him. runs with Mx. Pajamas and Jennie Jane. Seems to be a lookout/scout who backs off to let them eat.
Konstantin – new (to us) tom cat, solid black short hair. May be the sire of Jennie Jane’s kittens.
Groundhogs – a set of older and younger (based on size) hogs who live in burrows under our deck and neighbors yard. Frequently visits the cat food bowls. Typically runs when they see us.
Racoons – it has been several years, but we have seen a few this spring and summer.
Opossum – seems to live in our tree (?) and occasionally comes up to the feeding station
Pittsburgh C.A.T. – our foster group
Homeless Cat Management Team – the larger umbrella group that runs clinics, works with feral colonies, does education and outreach, and more.
Lisa – Pgh Cat/HCMT volunteer who has been teaching us how to do all of this

Friday morning, we actually set the traps to close on our cat when she took the bait. Then we waited.

Typically, Jennie Jane visits in the morning and the again in the later evening. We suspect she lives somewhere nearby, possibly under our deck. When she began turning up during the day on Wednesday and Thursday, we suspected her pregnancy made her very hungry.

So we set up on Friday around 1 PM.

(Flashback to Tuesday night, 11 PM – a very young racoon tripped the trap. We covered the trap, opened the door, and nothing happened. They were terrified. So I propped open the door and eventually the

At 2:30 PM, the wrong cat walked into the trap. He is now known as Konstantin and he is clearly a tomcat with a

bad-ass attitude. At this point, we were under the impression that we had to release him because there are no walk-in spay & neuter clinics on the weekend and we could not keep him crated for the entire weekend. We also needed the trap for Jennie Jane. We have since learned that it would have been better to keep him crated, contact our rescue/feral group for help and a loaner trap. It is always important to have a plan for how you will accomodate and care for any cats you trap. We were mistaken here, but we will work OT to rectify and try to win over Konstantin in future days.

Thankfully, we had sturdy leather gloves so I was able to release the trap and let him run away with the furies of hell chasing after him (in his mind.)

3:30 PM. One of our two resident groundhogs wanders into the trap and gets stuck. As in the trap door was stuck.

After covering the trap, I called the trap’s owner (Lisa) and she explained how to jimmy with the metal whothingies and a screw driver to get it open. While wearing leather gloves. With a wild animal inside. Once I got the door open, the occupant decided to remain. So I propped it open with a bucket and walked away. Sure enough, the groundhog left a few minutes later.

Reset both traps and freshening the food lures.

4:02 PM. Jennie Jane is in the yard. She’s exploring both crates, pulling out whatever food she can reach and very tentatively walking just far enough in to snatch other tidbits. No dice. (Scroll down to see that video.)

4:32 PM. Jennie Jane is crouched under our chaise lounge in the shade, staring at us with woeful eyes as she considers her options.

5:32 PM. Jennie Jane 1, cat trap 0. She got some more food and got out before it closed on her. Unsure what happened exactly.

5:52 PM. Jennie Jane is now crouched in another section of our deck staring at the traps. She’s a very sad cat. She eventually wanders off to what perhaps she considers more fruitful grounds. She’ll be back.

7:37 PM.  She’s back and has now decided to come up onto the deck near our kitchen door. She’s staring into the window and willing us to bring her some food right now. 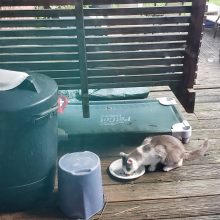 7:57 PM. Oxsana is back. He comes up onto the deck near the kitchen door so I was able to touch him and offer him some food.

8:15 PM Oxsana and Mx. Pajamas are both lounging around the kitchen door. We have an outdoor elevated pet bed they like to use for napping. We are furtively feeding them to avoid their tumbling into the trap.

9:09 PM. Are you kidding me? The other groundhog showed up. He’s pissed. And the trap is once again jammed – it must be their weight doing that. We cover him and I wrestle with the screwdrivers to get the door open. His teeth are not helpful. He eventually backs up and I get the door open. Off he goes without hesitation.

At 11 PM, we call it a night. I close the traps an we remove everything but water from the deck. We’ll try again on Saturday.

That makes our weekly trapping total: 1 young racoon, 2 groundhogs, 1 wrong cat, and 2 almost wrong cats. Plus, the leftovers of a 12 piece bucket of KFC and about 1/4 pound of turkey lunchmeat.  We went through dozens of pages of newspaper, 2 sheets, a tablecloth, 2 screwdrivers, and countless paper plates. Probably 800 trips in and out the kitchen door.

How long ’til my soul gets it right